There have been reports of violence, which erupted following the BJP-IPFT alliance's victory over the CPI-M, ousting the Manik Sarkar led government in the polls. 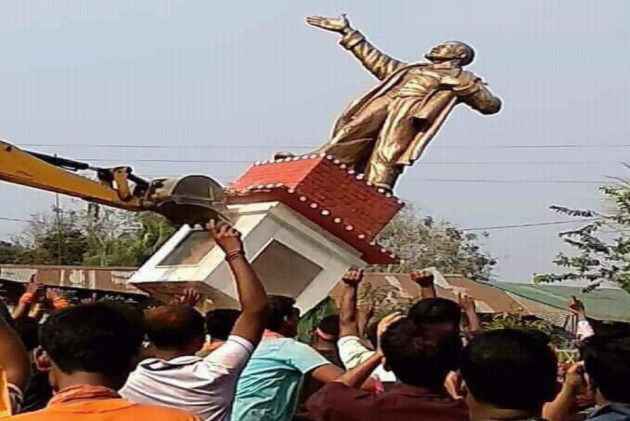 The government condemns all kinds of violence but statues of foreign leaders have no place in India, Union Minister of State for Home Hansraj Gangaram Ahir said today.

The violence followed the BJP's victory in the recently concluded Assembly elections in the northeast state, where a 25-year Communist government was ousted.

"We condemn all kinds of violence and the state government is handling the situation. But I want to make it clear that statues of foreign leaders are not required in India. I don't want to take anyone's name but I want to say that we have no place for them," Ahir told PTI in response to a question about Lenin's statue being pulled down.

He added that the country had produced enough icons and ideologues, such as Mahatma Gandhi, Swami Vivekananda, B R Ambedkar, Deen Dayal Upadhyaya and Ram Manohar Lohia, for people to eulogise.

Union Home Munister Rajnath Singh has called up Tripura Governor Tathagata Roy and DGP A K Shukla and asked them to ensure peace and check violence till a new government is installed in the state.

There have been reports of violence, which erupted following the BJP-IPFT alliance's victory over the CPI-M, ousting the Manik Sarkar led government in the polls.

The sporadic violence and clashes between rival political groups in different parts of Tripura broke out after the election results were declared on Saturday.

Statues of Communist icons like Lenin, the Russian revolutionary leader, Mao, the Chinese revolutionary, and Marx, the German revolutionary socialist, were installed in states like West Bengal, Kerala and Tripura, where the Left was in power.