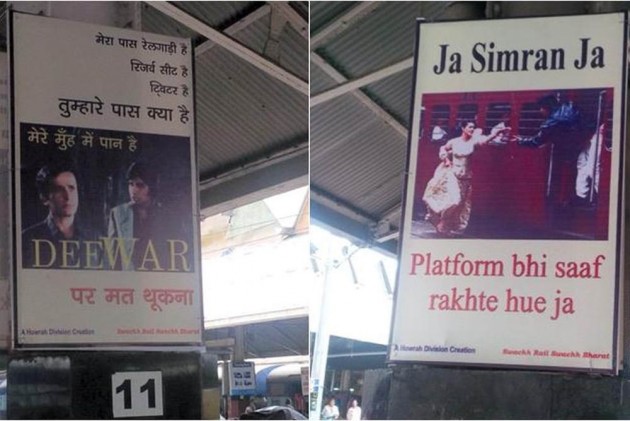 "Littering says a lot about you" had read billboards in Toronto in a bid to shame litterbugs. Hong Kong tried something even better. It engaged a laboratory to test DNA samples from litter ( like cigarette butts, chewing gum or condom) and drew likely faces of the people who actually left the trash. The faces were then put on huge hoardings under a 'Face of Litter' campaign.

Scotland experimented with a 'Don't abandon your litter' campaign with images of trash and clever lines. Picture of a half-eaten burger left on the ground was accompanied by the following message : "It was so juicy the way you held me; But now you are satisfied and you just chucked me".

The Indian Railways has also jumped into the act. The agency hired by it has predictably fallen back on Hindi films. Posters from the Shah Rukh Khan blockbuster  Dilwale Dulhania Le Jayenge have come up at railway stations with the dialogue, "Ja Simran Ja, jee le apni zindagi" tweaked to read, "Ja Simran Ja, platform bhi saaf rakhte huwe ja". Clearly all cities are grappling with litter but nowhere perhaps is the problem more acute than in Indian cities, where much more than humour is required to deal with trash.

Delhi high court on Wednesday asked police to share CCTV footage with municipal bodies in a bid to identify litterbugs and punish them, if necessary, with imprisonment. People, the court reminded the government, could be booked for public nuisance, punishable with both imprisonment and fine under the Indian Penal Code (IPC).

People are booked at the moment under the anti-litter law of 2009 which allows fines between Rs 50 and Rs 5,000 to be imposed. Section 268 of the IPC however provides for punishment extending to six months of imprisonment. The North Delhi Corporation informed the high court that in six months this year it had collected Rs 1.86 crore as penalty from 15 thousand people.

The high court was informed that 85% of all garbage reaching the landfill sites is lifted from the streets of Delhi. Among all the metros, the trash generated in Delhi is the highest according to figures released by the Central Pollution Control Board. Yet another report, however, prepared by the Centre for Science & Environment points out that while the four landfill sites in Delhi take up 164 acres, the requirement was assessed at 650 acres by the Central Pollution Control Board five years ago in 2011. Even if people put the trash in bins, the report added, the problem would persist because there was no system in place to segregate, collect, dispose and recycle the trash.

There is however much more to litter than meets the eyes. In 2012, for instance, when the Delhi Municipal Corporation was trifurcated, it was announced that each councillor would get Rs 2.55 crore for roads and sanitation. It was also announced that bins would be put up every 100 metres in the entire city. North Delhi Municipal Corporation alone also claims to have 23,000 sanitation workers in its rolls. But four years later there is no sign of bins even 400 metres apart while all three municipal bodies now claim that they have no money to pay even salary and retirement benefits.

The three municipal corporations of Delhi has a budget of Rs 6,919 crore in 2016-17, up a thousand crore from last year. The Lutyen’s zone in the capital city is administered by NDMC ( New Delhi Municipal Corporation) which reports to the central government. Besides, there is a cantonment board to take care of the sprawling areas occupied by the defence services. Neither NDMC nor the Cantonment Board has any problem with funds. But the other three municipal corporations which cater to people over 97 per cent of the city have been reporting deficits that run to several thousand crores.

Even more astonishingly, the high court was told that only 3.95 lakh people in Delhi paid property tax. Obviously the municipal corporations are unable to collect property tax from a large number of people owning property. They are also accused of failure to collect Rs 1,500 crore from the Delhi Development Authority (DDA) which reports to the union ministry of housing.

Significantly, the AAP Government of Delhi has been blaming the BJP-controlled municipal corporations of huge financial irregularities and for stalling independent audit. But the high court has made it clear that it is not interested in the feud but in results. Delhi, it observed, has become a garbage dump and Dengue and Chikungunya had acquired epidemic proportions in the city and tough measures needed to be taken.

Will the admonition work ? It would seem unlikely in the absence of proper infrastructure and clarity. The capital city, for example, is unable to ensure that residents segregate bio-degradable waste. The civic bodies are also unable to prevent mixing of solid waste or to stop construction waste which can be recycled from reaching the landfill sites.

While heftier fines and threat of imprisonment may act as a deterrent for some people and for some time, they cannot be a substitute to more coherent laws and systems in place. To cite just one anomaly that needs to be addressed, while people get arrested for littering the street, will there also be punishment for dog owners who fail to remove the poo ?