Little Workers Of The World

While it may be an offence to hire a child under 14, there is no law, to the best of my understanding, that a boy under 14 cannot earn a livelihood. Let us not discourage the spirit of enterprise. The editor of a Delhi newspaper took the initiative to find out in what way the new law had changed our lives in the first few days. A lengthy report appeared in its Sunday edition which was an eye-opener. Obviously nothing had changed. The reporters found that even in the snack-stalls patronised by the employees of the Union labour ministry and the social welfare ministry, juvenile servers were very much in evidence. The paper’s photographers corroborated it with tell-tale pictures. The only difference that the reporters found was there were no 12-year olds or 10-year olds. They all claimed they were 15 or 16 years of age although their voices and their hairless upper lips gave the truth away.

The other change they found was that they all were anxious about what would happen to them if their employers turned them away. Where would they go? They may currently be victims of exploitation. But they had a place to stay, an address and a guardian. Above all, they had the satisfaction of being able to send a money order home to their mother in their village. You have to read the reporters’ accounts of their conversations with these young earners to know how proud they were at being able to do something for their mother and younger brothers and sisters. Their fathers were either dead or given to drink. One could not help being impressed with these youngsters’ sense of responsibility. The new law would require that they be dismissed from their jobs. But the government has made no alternative arrangements for their food, clothing and shelter. Is it right on the part of government to rob them of their honest means of livelihood?

It would be different if these children were engaged in undesirable activities like drug-peddling and pimping. Or hazardous ones like working in fireworks factories or the asbestos industry. Then society would have some justification for rescuing them even if it did not rehabilitate them. But as domestic labour or shop hands they were doing honest work often beyond their ordinary endurance. Sometimes you will find in homes that girls as young as eight or 10 have been engaged to take care of an infant. It is a common sight to see a lean little ayah moving around with a little Hercules riding on her waist, and while you will be wondering how to remonstrate with the hostess, she will tell you, "Isn’t she cute? Her mother works in our house as a maid. The husband is a good-for-nothing. There are four daughters. This is the youngest. The others have come of age and the mother is naturally worried about leaving them at home or sending them to school. She takes them with her to the houses where she does sweeping and cleaning. In order to help her I told her to leave the young daughter with us. She is a cheerful little thing. She stays with us. Do you know how bright she is at picking up English?"

The statute book is full of enactments undertaken to demonstrate that we are not a benighted society. As long ago as the 1920s, the Harbilas Sarda Act was passed fixing the minimum age for the marriage of girls at 14, and in independent India it is 18 for girls and 21 for boys. Yet how many breaches do we not see of this rule? The Child Labour (Prohibition and Regulation) Act itself was passed as long ago as 1986. It is now, 20 years later, that the section banning the employment of children below 14 as domestic help and in eating places and the hospitality sector is coming into force.

According to a report in the Hindu, government estimates that the number of children engaged as domestic labour is around 185,000 and the number working in dhabas and hotels is around 70,000, but non-governmental organisations believe that the total is nearer 20 million, with one million in Delhi alone. A variation of 80 times is difficult to understand but the unofficial estimate would be nearer the mark. For wherever we turn we see a boy pouring out tea or running with grubby glasses containing drinking water. Then there are the chaatwalas and the chanawalas, not to speak of the newspaper hawkers and shoeshine boys. 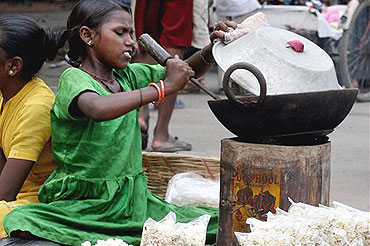 The peril in having too many unenforced laws is that some policeman or law enforcer will exploit the loophole for making money or otherwise showing his authority. A boy hawking puffed rice roasted by his grandfather might be hauled up by a cop for not having a licence. He might even be arraigned as an under-aged employee coming under the mischief of the Child Labour Act, whereas he is not an employee at all but a member of the family entitled to be considered a partner. While it may be an offence to hire a child under 14, there is no law, to the best of my understanding, that a boy under 14 cannot earn a livelihood.

A shoeshine boy provides a ready example of entrepreneurship on the part of someone lacking in age or wealth. Let us not discourage the spirit of enterprise. It will be useful if some lawyers specialising in human rights cases looked into the right of an urchin not to be deprived of the pride and satisfaction of earning his own living and at the same time helping his mother.