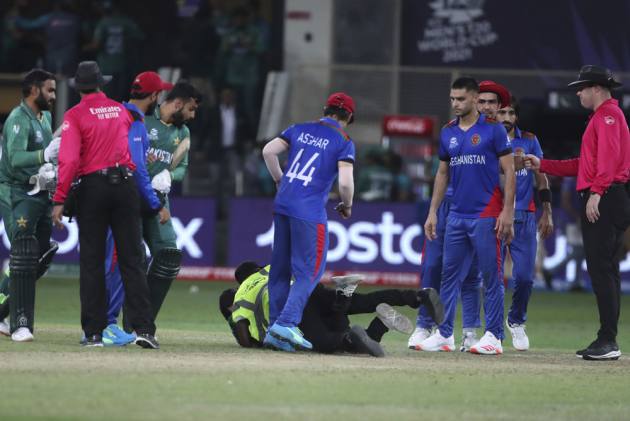 One instant classic in Dubai. Pakistan needed 24 in the last two overs, but they did it in the next six balls with a certain Asif Ali hitting Karim Janat for fours sixes. A reminder of what happened in Kolkata some five years ago! Chasing Aghanistan's 147/6 in their Super 12 match of ICC Men's T20 World Cup 2021, Pakistan reached the target with one over to spare. Pakistan thus registered three wins in three matches to effectively leave pre-tournament favourites India and New Zealand fighting for the second semi-final spot from Group 2. All eyes will be on Sunday's India vs New Zealand clash here. Afghanistan won the toss and opted to bat but they kept losing wickets after a frenetic start. Then, Mohammad Nabi and Gulbadin Naib revived the innings with an unbeaten 71-run stand. Pakistan also got off to a nervy start. But Babar Azam played a captain's knock, 51 off 47, and with Fakhar Zaman (30 off 25) helped Pakistan keep Afghan spinners at bay. But Rashid Khan removed Azam in the 17th over to make things interesting. Then, Ali arrived with his bat. Pakistan, with six points and a net run rate of 0.638, are now the clear favourites to make the last four from the group, which also has Namibia and Scotland. Early fixtures against fellow big boys India and New Zealand, which they won comfortably, will also help their cause. They next face debutants Namibia on November 2, then take on minnows Scotland in their final group match on November. Afghanistan, who spanked Scotland in their first match, next face Namibia on October 31. Catch highlights and cricket scores of the AFG vs PAK match:

Naveen-ul-Haq returns for his third and he almost redeems himself. Shoaib Malik hits back the third ball with some venom and the Afghan bowler sticks out his bowling hand. Dropped catch. But saves a certain four. Naveen continues, and the wicket. Malik (19 off 15), caught behind. Afghanistan are back. PAK - 124/5 (17.5)

Rashid Khan on with his final over. A dot, then Shoaib Malik launches the second for a massive SIX over mid-wicket boundary. A double to mid-wicket, and two wides. And what, Naveen-ul-Haq drops Babar Azam at backward point. What a moment. A tight single, then Rashid cleans up Babar. Pakistan captain goes for 51 off 47. Pakistan need 26 runs in 18 balls. Rashid's figures: 2/26. PAK - 122/4 (17)

Karim Janat returns for his third over. Three singles, then another as Babar Azam plays it behind square leg for his fifty, in 45 balls. Shoaib Malik hits the next for a four to third man. Pakistan need 38 runs in 24 balls. PAK -110/3 (16)

Mohammad Nabi on with his final over. Two singles and a no ball, front-foot. Harsh call. Rashid Khan takes a catch as Mohammad Hafeez lofts the free hit to deep midwicket.  Only a single. Eight from the over. Nabi's figures: 1/36. Pakistan need 51 runs in 36 balls. PAK - 97/2 (14)

Rashid Khan continues. A genuine outside edge off the fifth ball and beats the slip for a four. Babar Azam very lucky. Eight from the over. Pakistan need 59 runs in 42 balls. PAK - 89/2 (13)

New man Mohammad Hafeez gets a streaky four off the fourth. Six from Mohammad Nabi's third over. Pakistan need 67 runs in 48 balls. PAK - 81/2 (12)

Mohammad Nabi returns. Fakhar Zaman plays an expansive sweep, but misses the ball. LBW. Pakistan take another review, off successive deliveries. Not this time. Zaman goes for 30 off 24. With that Nabi breaks a 63-runs stand. And probably opens the door. Mohammad Hafeez is the new man. PAK - 75/2 (11.1)

Rashid Khan on. Afghanistan's last hope. And he strikes. Traps Babar Azam (36 off 32) in front with the final ball. Azam takes a review. Faintest of spikes and missing the leg too. Azam stays. Three singles from the over. Pakistan need 73 runs in 54 balls. PAK - 75/1 (11)

Naveen-ul-Haq continues. Babar Azam hits the first ball for a four, over backward point. Then another, off the fourth to third time. Delicate touch. 13 from the over. PAK - 62/1 (9)

Earlier, Mujeeb Ur Rahman left the field after completing his spell.

Bowling change. Naveen-ul-Haq on. A dot to Fakhar Zaman, then two singles. Zaman hits the fourth ball for a four, to fine leg boundary. A single to end the over. Seven from it. PAK - 38/1 (6)

Mujeeb Ur Rahman on with his third. Singles off the second and third, then three dots to Babar Azam. PAK - 31/1 (5)

Mujeeb Ur Rahman continues. A single, then a dot. Mohammad Rizwan goes for a slog-sweep, but ends up offering a catch to Naveen-ul-Haq at square leg. He goes for 8 off 10. Fakhar Zaman is the new man. PAK - 12/1 (2.3)

Mohammad Nabi shares the new ball. Four singles, then a dot. Mohammad Rizwan sweeps the last ball for a four. Eight from the over. PAK - 11/2 (2)

Mujeeb Ur Rahman with the first over. Three singles. Target for Pakistan - 148 runs.

Shaheen Afridi returns for his third over. Gulbadin Naib hits the second ball for a four, his first, to fine leg boundary. Eight runs from the over. AFG - 101/6 (16)

Hasan Ali with his third over. A wide, then a four deep extra cover as Mohammad Nabi plays a lofted drive. Seven from the over. 93/6 (15)

Shadab Khan on with his final over. Najibullah Zadran hits the fourth ball for a six, over square leg boundary. Then a fine take behind the wicket by Rizwan. Zadran goes for 22 off 21. Gulbadin Naib is the new man. AFG - 76/6 (12.5).

Hasan Ali returns for his second over and a maiden, first of the match, to Najibullah Zadran. Three runs in the last three overs. AFG - 67/5 (12)

Shadab Khan on with his third over. Singles off the first two balls, and dots to Mohammad Nabi. AFG - 67/5 (11)

Skipper Mohammad Nabi joins Najibullah Zadran in the middle. He takes a single off the fifth ball. One wicket and one run from Imad Wasim's final over. His figures: 2/25. AFG - 65/5 (10)

Shadab Khan on with his second over. Najibullah Zadran hits the third and sixth balls for fours. Nine from the over. AFG - 64/4 (9)

Shadab Khan on with his first over. A double off the second ball as Karim Janat plays it past point fielder. And four more dots. AFG - 51/4 (7)

Bowling change. And Hasan Ali strikes first ball. Babar Azam takes another catch, this time at mid-on to send Rahmanullah Gurbaz (10 off 7) back. Now, it's like Afghans are throwing their wickets away. Najibullah Zadran is the new batter. AFG - 39/4 (5.1)

Bowling change. Haris Rauf on. A double, then a single. Asghar Afghan fails to check his shot and caught & bowled. He goes for 10 off 7. Karim Janat is the new man. Somebody needs to calm down Afghans. Frenetic. AFG - 33/3 (4.3)

Imad Wasim continues. Rahmanullah Gurbaz smashes the first ball for a six. Smashed over mid-wicket boundary. A single, and dot, then crazy mix-up. Gurbaz wants a quick single, halfway down the pitch... but no response from Afghan. He survives as Wasim fails to gather Rizwan's throw at the bowler's end. A six, over square leg boundary as Afghan takes charge. A misfield and a four to the same area. 17 from the over. AFG - 30/2 (4)

Shaheen Afridi continues. Mohammad Shahzad hits the second ball for a four, over cover, then holes out at mid-off. Easy catch for Babar Azam. He goes for 8 off 9. Asghar Afghan is the man for Afghansitan. AFG - AFG 13/2 (2.4)

Imad Wasim with the second over of the match. A wide, and a single, then a dot. Hazratullah Zazai gets a top-edge off the third and is caught at short third man by Haris Rauf. Zazai goes for a five-ball duck. Rahmanullah Gurbaz is the new batter. Three runs and one wicket from the over. AFG - 8/1 (2)

Probing first over from Shaheen Afridi. Pakistan captain Babar Azam even takes a vainly review, for an LBW against Hazratullah Zazai off the last ball. Swinging delivery, and missing leg. Five from the over.

In Sharjah, Windies survived a thriller to beat Bangladesh by three in a last-ball finish. Needing 13 in the last over, Bangladesh managed just nine with Andre Russell keeping his calm. The win revived defending champions' semi-final hopes, but the Tigers' campaign is as good as over.

Both the sides are unchanged.

Afghanistan win the toss and bat first against Pakistan.

They have met only once in T20Is, with Pakistan winning that match by six wickets in 2013.