Michael Neser and Mitchell Starc got a wicket each as England lost both openers when stumps were drawn early on Day 2. Get highlights of AUS v ENG second Test Day 2. AUS have never lost a day-night Test match. 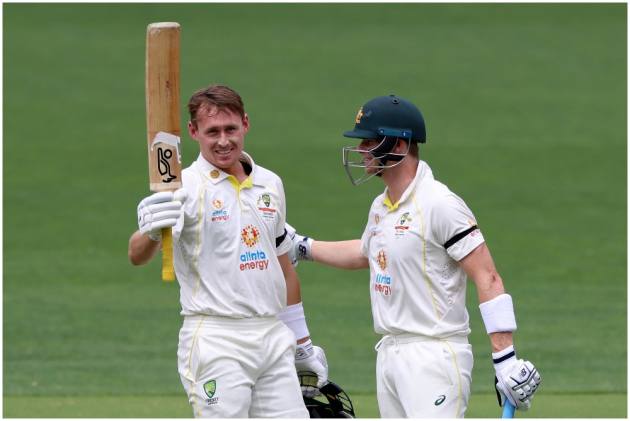 Australia started Day 2 of the day-night Ashes 2021-22 Test at Adelaide Oval on Friday in a dominant position over England. Starting the day on 221/2, overnight batsman Marnus Labuschagne completed his sixth Test century before departing for 103. Australia lost Travis Head and Cameron Green quickly but Steve Smith and Alex Carey lifted the hosts with a 91-run sixth-wicket stand. Smith missed on a well-deserved century by seven runs. Carey also got out soon after scoring his maiden Test fifty. Mitchell Starc and debutant Michael Neser added 58 runs in 51 balls towards the end to help Australia declare the innings at 473/9. For England, Ben Stokes and James Anderson took three and two wickets respectively. In reply, the visitors were two down for just 17 runs on board at Day 2 stumps. Neser, after his good show with the bat, also got Haseeb Hameed as his maiden Test wicket. Australia lead the five-match Ashes 2021-22 series by virtue of their nine-wicket win at the Gabba in Brisbane. Get highlights of AUS v ENG second Test.

Stumps have been called a bit early in Adelaide as a precautionary measure after a big flash of lightning. The pitch was covered immediately. England finish the day on 17/2 in reply to Australia's huge 473/9 decl. For England Joe Root and Dawid Malan will start the next day.

Michael Neser gets his maiden Test wicket with his second ball in the longest format of the game. He dismisses Haseeb Hameed for 6. Earlier, Mitchel Starc has dismissed Rory Burns for 4. England have lost both their openers. England 12/2

Mitchell Starc and debutant Michael Neser added 58 runs in 51 balls for the eighth wicket as Australia declared their innings at 473/9. Starc remains not out at 39 while Neser impressed with 35.

The partnership between Steve Smith and Alex Carey now grows to 41. Smith is batting at 69 while Carey is at 24. Australia 335/5

Dinner break has been announced. Australia 302/5 with Steve Smith and Alex Carey at the crease.

Two wickets for England in quick successions. Cameron Green is clean bowled by Ben Stokes for just 2. From 291/3 to 294/5 for England.

Out! England captain Joe Root dismisses Travis Head, clean bowled for 18. England get the second wicket of the day. Head departs for 18. Australia 292/4

Steve Smith reaches his fifty with a boundary off Ben Stokes that flew over Jos Buttler's head. It is his 32nd in Test cricket. Australia 291/3

Sixth Test century for Marnus Labuschagne with a four off James Anderson. What a knock it has been for the left-hander. Jos Buttler must be biting his nails now behind the stumps. Australia 236/2

First runs in the morning. Steve Smith hits James Anderson through the point for a boundary. Australia 225/2

Marnus Labuschagne completed 2000 runs during his unbeaten 95-run knock on Day 1. He became the 58th Australian and 325th batsman overall to reach this landmark.

Hello and welcome to the Day 2 coverage of the second Ashes 2021-22 Test between Australia and England. Australia are in dominating position and they will like to build on that.

The return of England's most successful pace twins - James Anderson and Stuart Broad - made little impact on the Australians on Day 1 of the pink-ball Test in Adelaide. Broad's early strike was negated by the Warner-Labuschagne stand that grew in confidence after surviving a torrid opening spell by the English pacers.

Marnus Labuschagne took full advantage of the 'lives' England gave the South Africa-born batsman. England wicketkeeper Jos Buttler dropped Labuschagne twice — once down legside when he was on 21 and the other when he fumbled a regulation chance off Anderson’s bowling with the second new ball when the Australian No. 3 was on 95.

On Friday, all eyes will be on Marnus Labuschagne, who has become only the second batsman after David Warner to make 500 or more runs in day/night Test matches.

But it will be Steve Smith who will want to shine in this Test for personal reasons. Smith returned to the Australian captaincy for the first time since the 2018 sandpaper scandal after Pat Cummins was ruled out. Cummins was deemed to be a close contact of a positive COVID-19 case when he dined at a restaurant on the eve of the match.

Steve Smith will start on 18. He has shown enormous patience batting for 71 deliveries but Friday will be a new day and England will come armed with the second new ball.