Australia are on the driver's seat after Day 1 of the second Ashes 2021-22 Test here in Adelaide Oval. David Warner (95) and Marnus Labuschagne (95*) did all the damage. Get here highlights of AUS v ENG second Test. 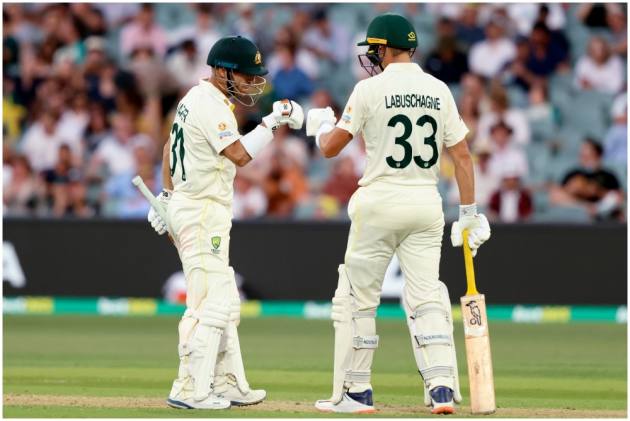 Australia had never lost a day-night Test match and they kept their reputation intact on the first day of the second Ashes 2021-22 Test here in Adelaide -- a day-night affair.  The hosts suffered a big blow when skipper Pat Cummins was ruled out of the game after coming in close contact with a Covid positive person. Vice-captain Steve Smith took over the reins with Travis Head his deputy. It was the first time Smith was leading Australia since stepping down from captaincy in 2018 following the sandpaper gate. Batting first, Australia had a disastrous start losing opener Marcus Harris with just four runs on board. That brought David Warner and Marnus Labuschagne together and the duo stitched 172 runs for the second wicket against an English attack that looked toothless. Warner was once again unlucky to miss out on a well-deserved century when Ben Stokes had his caught for 95. Labuschagne is unbeaten on 95 with Smith (18) in the company when stumps were drawn. Australia lead the five-match Ashes 2021-22 series by virtue of their nine-wicket win at the Gabba in Brisbane. Get here highlights of AUS v ENG second Test.

Stumps have been drawn on Day 1 of the second Test here in Adelaide. Marnus Labuschagne and Steve Smith are batting on 95 and 18 respectively. Australia 221/2

What a day Jos Buttler is having today? He has dropped Marnus Labuschagne twice today, first on 21 and now in his nineties. An absolute sitter. Australia 220/2

Finally, runs after 24 dot balls. Looks live Steve Smith and Marnus Labuschagne are in no mood to play their shots at the fag end of today's play. Australia 217/2 (83.5)

Two matches, two nineties for David Warner. He holes out for 95 off 167, caught by Stuart Broad at the cover. A wicket for Ben Stokes. Steven Smith joins Marnus Labuschagne. Warner was out for 94 in Gabba's first innings. AUS - 176/2 (64.2)

David Warner and Marnus Labuschagne have given Australia a great platform for a big total. Warner is batting at 65 while Labuschagne is holding the other end at 53. Austra;ia 129/1 at tea break.

Fifty for Marnus Labuschagne. He pushes Ollie Robinson for a three to match his partner. Australia 122/1

100 up for Australia.  Marnus Labuschagne is batting at 37 while David Warner is holding the other end on 53. Australia 103/1

David Warner completes his fifty with a couple of fours off Ben Stokes. England pacers so far have looked toothless with lesser movement with the ball. The shadows have started to come in and the lights are expected soon. Australia  85/1

50 comes up for Australia after a couple of fours from David Warner (29*). Marnus Labuschange (16*) is holding the other end. Australia 55/1

James Anderson starts the proceedings once again after the break. This is going to be a crucial session for both teams. While Australia will try to build on the start, for England, they would like the ball do all the talking under lights.

David Warner and Marnus Labuschange have taken the slow and steady route. The duo has so far negated the English attack very well. Dinner break has been announced. Australia 45/1

After losing Marcus Harris early, David Warner (15*) and Marnus Labuschangne (10) have steadied Australia with their calm and composed batting. Australia 30/1

David Warner hits the first boundary of the Test match after 82 balls. Chris Woakes bowls wide and Warner thrashes it away to deep extra cover for four. Australia 20/1

Stuart Broad gives England first breakthrough. Marcus Harris tries to pull a short delivery on the leg side, gets an edge and Jos Buttler takes a stunning diving catch behind the wickets. Harris goes for 3. Australia 4/1

First runs for Australia in the match. Marcus Harris flicks James Anderson wide of mid-on for a three. Australia 3/0

James Anderson starts with a maiden over. Marcus Harris and David Warner have opened the batting for Australia. Australia 0/0

Big moment for Michael Neser who makes his debut for Australia after skipper Pat Cummins was ruled out of the second Test. Cummins came in contact with a Covid positive person and has isolated himself. Former Australian pace great Glenn McGrath hands Neser his maiden Test cap.

Australia have won the toss and decided to bat first.

England will look for a much-improved batting display in the Adelaide Test. They may reinforce their attack by adding pace twins James Anderson and Stuart Broad but until and unless England put up a good score on the board, the odds will always be stacked up against them.

Then there is this piece of history that does not favour the tourists. No England team has recovered to win an Ashes series in Australia after losing the first Test since captain Len Hutton’s squad in 1954-55.

Australia have a superb day-night Test record. Five of their eight wins have come in Adelaide. England have won one and lost three in four day-night Test matches played against Australia, New Zealand, West Indies and most recently, versus India earlier this year.

Australia will also look for a good batting display. David Warner has been named in their playing XI. Warner had a few reprieves on his way to scoring 94 runs in the series-opener at the Gabba in Brisbane. But after taking two hits in the ribs while batting, Warner didn’t field for Australia in England’s second innings.

Right-arm paceman Jhye Richardson will return to the Australian Test lineup for the first time since February 2019 to replace the injured Josh Hazlewood.