Catch Day 4 highlights and cricket scores of the first AUS vs ENG, Ashes 2021-22 Test at The Gabba, Brisbane. Australia won by nine wickets to take a 1-0 lead. 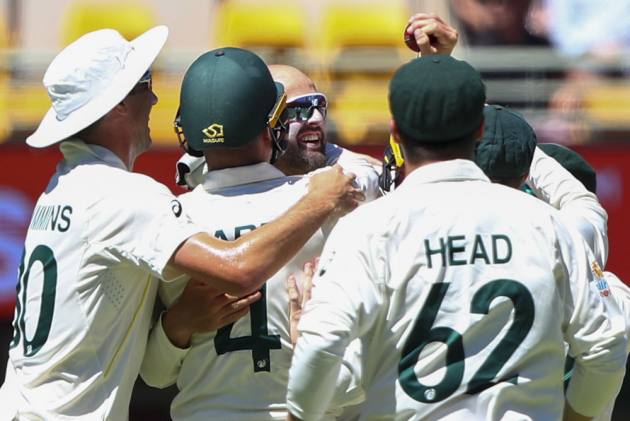 Australia restored the 'fortress Gabba' pride with a facile win over England in the Ashes 2021-22 series opener on Saturday. Chasing a nominal target of 20 runs, the Aussies wasted no time and reached the target in 5.1 overs to register a 9-wicket win on Day 4 of the first Test at a venue where they were stunned by a second-string Indian side earlier in January. The win helped Australia open their ICC World Test Championship points account.

England, resuming at the overnight score of 220/2, lost Dawid Malan to Nathan Lyon, who's sitting on 399 Test wickets for an eternity. Cameron Green, who almost got Joe Root with the final delivery on Day 3, got the England captain soon and England were in familiar territory. Star all-rounder Ben Stokes became a victim of Australia's well-planned play with skipper Pat Cummins squaring him up for 14. Jos Buttler scored 23 off 39 for the day's highest score even as Lyon returned with figures of 4/91 in 34 overs.

It sure was the 'moving day' everyone was talking about. Root and Malan were primed for a big stand, but they could add only three to their overnight stand of 159 runs for the third wicket. Then for all their optimism and hopes, the English innings collapsed to hand Australia a comfortable win with more than a day to spare. And the star of the match was Travis Head, who hit 152 of 148 balls. But a sensational Test captaincy debut for Pat Cummins! The pacer first took a fifer to trigger England's first innings collapse, 147 all out, then took two more in the second.

For England, the absence of James Anderson and Stuart Broad proved detrimental with Ben Stokes operating in very limited spells. The second AUS vs ENG Test at Adelaide Oval starts December 16. This will be a pink-ball Test. Meanwhile, Bellerive Oval, Hobart will host the series finale, starting January 14 next year. This is also a day-nighter. Catch Day 4 highlights and cricket scores of the first AUS vs ENG Test match here:

Ollie Robinson on with his third over. Marcus Harris plays the second ball to sweeper cover for a three. Six to win. A single to square leg. Almost an overthrow from Mark Wood and Ben Stokes' having a laugh. One more single. Four to win. But Robinson gets Harris for 9 off 23. Australia need 4 runs. Marnus Labuschagne is the new man. AUS - 16/1 (5)

Chris Woakes on with his second over. Four dots, then Alex Carey guides the fifth to square for a couple. Australia need 9 runs. AUS - 11/0 (4)

Ollie Robinson continues. Marcus Harris flicks the third ball to square leg for a single to open his account. Six from the over, including a three. Australia need 11 runs. AUS - 9/0 (3)

Chris Woakes making things interesting. England takes review for an LBW against Alex Carey. Inside edge. A single from the over. Australia need 17 runs. AUS - 3/0 (2)

Ollie Robinson with the new ball. And he starts with a no-ball. Alex Carey takes the strike. Marcus Harris is his opening partner. Target was a grand total of 20 runs. Now after that front foot encroachment, 19.

And it's also lunch.

What a time to play the reverse sweep. Can't blame him either. A thickish edge and Ollie Robinson is gone for 8 off 17. Third wicket for Nathan Lyon. Travis Head takes the catch at backward point. Mark Wood joins Chris Woakes in the middle. England lead by 8 runs. ENG - 286/8 (97.5)

Pat Cummins with the first over of the day. David Malan takes the strike.

Meanwhile, the fifth Test match has been moved to Hobart. It will be another pink-ball Test.

At the close of play on Day 3, England were 220/2 with Dawid Malan and skipper Joe Root unbeaten on 80 and 86 runs respectively. They have together faced 294 balls in an unbroken third-wicket stand for 159 runs. But the visitors, still 58 runs behind, will need to keep their heads down as another batting collapse will give Australia a chance to go for the kill. someone from the visiting camp will need to do a Travis Head. The match still has more than 180 overs remaining.

For Australia, an early wicket on Day 4 will help their cause. After getting two early wickets, Aussies toiled hard against a determined English pair. Root, who's yet to hit a Test ton in Australia, looked in fine touch and if the visiting skipper continues in that vein, it will be very difficult for Australia to force a result. Settling for a draw after taking an innings lead of 278 runs will be demoralising for the hosts.

For the record, Root has scored 1,541 Test runs in 2021 -- the most by an Englishman in a calendar year, going past Michael Vaughan's 1,481 in 2002. With games at Adelaide and Melbourne coming before the end of the year, Root may well break Mohammad Yousuf’s world record of 1,788.

In contrast, Aussie spinner Nathan Lyon is having a tough outing. He is still waiting to be the third Australian bowler to reach 400 Test wickets. But it's taking some time. The off-spinner claimed his 390th Test wicket in January 2020, then his 399th in January this year. And he has gone wicketless, again.