Australia have once again shown why they are the kings in pink-ball Tests. Chasing 468 to win, England need a miracle to deny Australia a 2-0 lead in five-match Ashes 2021-22 series. Get here Day 4 highlights of AUS vs ENG. 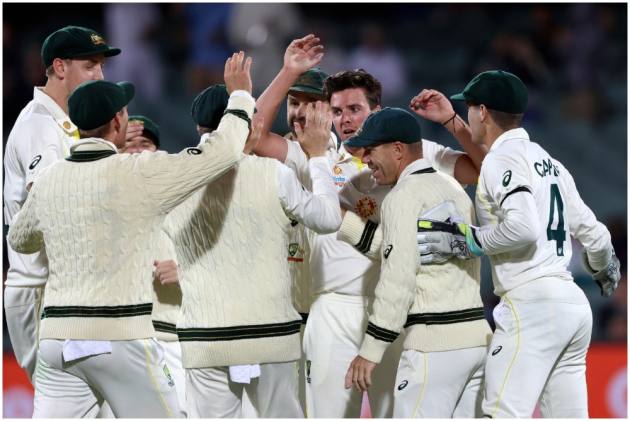 Australia are slowly inching towards their ninth consecutive day-night Test match victory. The hosts have dominated throughout the second Ashes 2021-22 Test in Adelaide and Sunday was no different. Starting Day 4 at 45/1, England had the upper hand in the first hour of the day taking three quick wickets as Australia were reduced to 55/4 in no time. But half-centuries from Alex Carey and Marnus Labuschagne revived Australia. England made a comeback with four quick wickets after the dinner break. But Cameron Green's unbeaten 33 helped Australia to 230/9 declared. Needing a mammoth 468 runs to win, England made a disastrous start in their second innings losing opener Haseeb Hameed with just four runs on board. Rory Burns and Dawid Malan got starts but failed to capitalise on that. England suffered a major blow on the final over of the day losing captain Joe Root to end Day 4 at 82/4. England will need a miracle to deny Australia a 2-0 lead in the five-Test Ashes 2021-22 series.  Australia have won in all their eight day-night Test matches so far. Get here highlights of AUS vs ENG.

Joe Root is out on the last over of the day. Certainly, England didn't want this. Root goes for 24, edging a Mitchell Starc delivery to Alex Carey behind the stumps. England 82/4. Umpires call it stumps on Day 4.

England have crossed the 50-run mark with Rory Burns leading the charge. The English opener is batting on 30. Captain Joe Root is at the other end with an unbeaten 12. England 63/2. still need 405 runs.

Dawid Malan's strong resistance with the bat comes to an end as he is out LBW by Michael Neser. Neser angled in around the off-stump and the ball hit straight to Malan's front pads. Malan goes for 20 off 52 balls. England 48/2, still need  420 runs to win

Haseeb Hameed's poor run continues. He has been dismissed by Jhye Richardson, caught by Alex Carey for a duck. England 4/1

Dawid Malan gets his second wicket in the innings. He dismisses Jhye Richardson, caught behind by Jos Buttler for 8. Australia 230/9. Australia have declared the innings. England need 468 runs to win.  Cameron Green remained unbeaten on 33.

Meanwhile, in a recent development, a broadcast crew member in the ongoing second Test match in Adelaide Oval has tested positive for Covid-19 today.

Dinner break has been taken. It's been a mixed bag in the first session. England took the honours in the first half taking three wickets including that of captain Steve Smith. Thereafter, it was Travis Head and Marnus Labuschagne as they steadied the sinking ship with an unbroken 79 run stand for the fifth wicket. Australia 134/4

100 up for Australia. Travis Head nudges Ben Stokes for a single to bring up three figures for the hosts. Australia 103/4

After three early wickets in the morning, Travis Head and Marnus Labuschagne have steadied the ship with a 33-run partnership for the fourth wicket so far. Head is batting at 19 while Labuschagne is on unbeaten 15.

England captain Joe Root was injured during the pre-game warm-ups and did not take the field for the start of day four of the second Ashes Test. Root was hit in the abdomen while batting in the nets ahead of Sunday's play at Adelaide Oval. "He is currently being assessed by the England medical team," ECB said in a statement. Allrounder Ben Stokes will stand in as captain as the tourists seek to avoid defeat in Adelaide and go two-nil down in the five-Test series.

Australia lose their fourth. Ollie Robinson joins the party. Steve Smith tries to tuck a short-pitched delivery, gets a bit of glove on it for Jos Buttler to take a diving catch behind the stumps. Smith departs for 6. Australia 55/4. Are we seeing an England turnaround?

England have struck twice in the morning. First, James Anderson clean bowled nightwatchman Michael Nesser with an absolute beauty. Marcus Harris then edged a Stuart Broad delivery for Joss Buttler to take a spectacular catch diving to his left. Starting the day at 45/1, Australia are 48/3 in no time. Steve Smith and Marnus Labuschagne are in the middle.

Joe Root won't be taking the field first up as he has injured himself during the throwdowns in training.

Hello and welcome to Day 4 of the second Ashes 2021-22 Test match between Australia and England.

England have put themselves in a big hole in the pink ball Test at Adelaide. Saturday saw two sides of the England batting. While a 138-run partnership between skipper Joe Root and Dawid Malan reinforced the belief that the visitors are in Australia to compete, losing eight wickets for 86 undid all the good work in the morning session.

England capitulated from 150 for 2 to be all out for 236 in reply to Australia’s first-innings total of 473-9 declared. Stand-in captain Steve Smith did not enforce the follow-on and decided to consolidate the lead after Mitchell Starc became the first bowler to complete fifty wickets in day-night Tests.

Cameron Green was also influential for Australia on Saturday with 2 for 24, claiming the key wicket of Joe Root, who became only the third batsman after Pakistan’s Mohammed Yousuf and West Indian Viv Richards to score 1600 plus runs in a calendar year.

Australia are unbeaten in the eight pink-ball Tests. Sunday will surely determine if they can win their ninth.