Australia have continued their domination on Day 3 of the second Ashes 2021-22 Test in Adelaide, thanks to Mitchell Starc's 4/37 that caused England to suffer a middle-order collapse. Get highlights of AUS v ENG second Test. 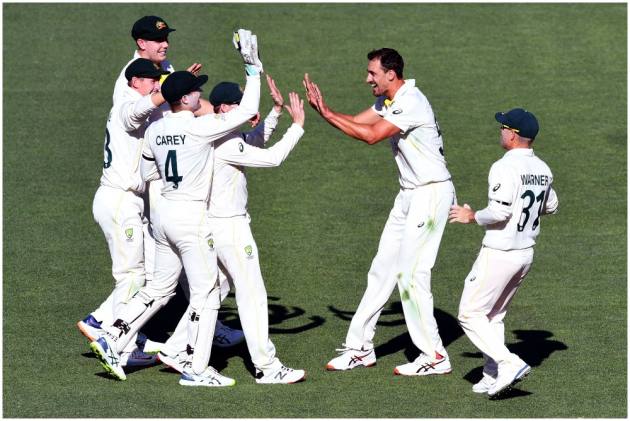 For the third consecutive day, Australia grabbed the honours in the day-night Ashes 2021-22 Test at Adelaide Oval. Starting the day at 17/1, England's overnight batsmen Joe Root and Dawid Malan played some beautiful cricket to remain unbeaten in the first session also completing their respective half-centuries. However, England's downfall started just after the dinner break with Cameron Green breaking the partnership with the wicket of Root. Soon after Malan departed for a well-made 84. From 157/4, England were soon down to 169/6 within a short period of time. Ben Stokes and Chris Woakes then stitched together 33 runs for the seventh wicket but once the latter was gone it was a matter of time for Mitchell Starc and Nathan Lyon to polish off the tail. England were all out for 236 with Starc finishing with 4/37. Starc also became the first bowler to take 50 wickets with the pink ball. England were also 38 runs short of the follow-on target but Australia decided to bat again. In the second innings Australia finished the day at 45/1 taking a lead of 282 runs. David Warner was run out for an unlucky 13. Get the highlights of AUS v ENG second Test.

Unlike the first innings, Marcus Harris and David Warner have started on a strong note with the former leading the charge. Warner, who got out on 95 in the first essay, is once again taking his time in the middle. Australia 41/0, lead by 278 runs.

Australia start their second innings. David Warner and Marcus Harris have come out in the middle. Australia 8/0, lead by 245 runs.

Mitchell Starc takes his fourth wicket as England are bowled out for 236. Starc dismisses Broad for 9. England are 38 runs short of the follow-on target but Australia will bat again.  It was Starc's 50th wicket with the pink ball. Australia take 237-run lead.

Australia are looking into a big lead. England are nine down with Ben Stokes the last man to get out on 38. Stuart Broad and  James Anderson are currently facing the Australian bowlers under lights.  England 231/9

Nathan Lyon takes his third wicket as he traps Ollie Robinson, LBW for a duck. England 204/8. Robinson reviews but the ball-tracker shows it crashes on the top of the middle stump.

England lose their seventh wicket as Chris Woakes is clean bowled for 24, by Nathan Lyon. England 202/7

Mitchell Starc gets his third wicket now. Jos Buttler short stay at the crease comes to an end, caught by David Warner for a 15-ball duck. He had dropped two catches on Day 1. England 169/6

Suddenly Australia have the upper hand now. Nathan Lyon gets the wicket of Ollie Pope, caught by Marnus Labuschagne. Pope goes for 5. England 164/5. Jos Buttler and Ben Stokes are batting.

Australia peg back with a couple of wickets. After Joe Root, another set batsman Dawid Malan departs, caught by Steve Smith for a well-made 80.  England 157/4

Dinner break has been announced. England 140/2 with Joe Root and Dawid Malan batting.

England's Joe Root and Dawid Malan are doing the same thing which Australian batsmen did the previous day. Hold the fort and hit lose balls for boundaries. Root also brings up his 52nd fifty in Test cricket and 15th against Australia. England 133/2

50 up for England. Dawid Malan has taken the England charge with skipper Joe Root playing the perfect second fiddle at the other end. England 65/2

England have started the day on a positive note with a couple of fours so far.  Joe Root is batting on 14 while Dawid Malan is holding the other end on 7. England 35/2

Hello and welcome to Day 3 coverage of the Ashes 2021-22 Test between Australia and England. Day 2 was called off early because of the weather which means 98 overs will have to be bowled today.

Seventeen for 2 at stumps on Friday, England will look up to skipper Joe Root and Dawid Malan to rescue them from a top-order collapse. The visitors trail by 456 runs and against an Aussie attack that looked menacing in the final session on Day 2, it will be a huge challenge for the English middle-order.

England have only themselves to blame for this position. Australian batsmen profited from dropped catches but the lower order handled the England pace attack, headed by James Anderson and Stuart Broad, very well.

But it was Marnus Labuschagne and Steve Smith who held the Aussie batting together. Labuschagne became the first player to hit three centuries in day-night Test matches while captain Steve Smith missed out on a ton as Australia strangled England with a solid total of 473 for 9 declared.

Labuschagne made 103 and Smith scored 93 before Australia’s tailenders scored some quick runs against England’s tired bowlers and Australia declared after tea. In between, Smith and Alex Carey (51) combined in a 91-run sixth-wicket stand before James Anderson removed both batsmen in successive overs just before tea.