Australia restricted South Africa to 118/9 then chased down the target in 19.4 overs in their ICC T20 World Cup 2021 opener. Catch highlights here. 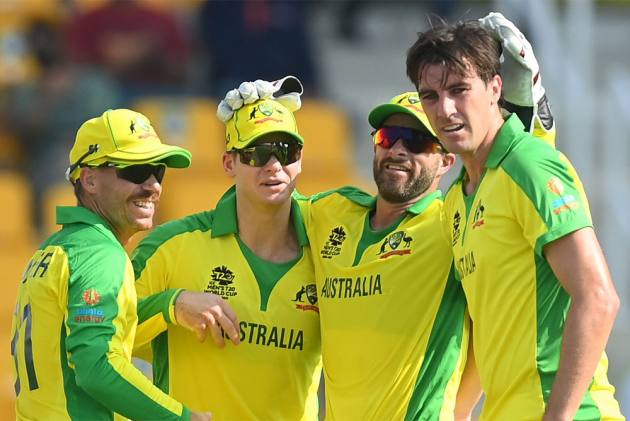 Australia started their ICC T20 World Cup 2021 campaign with a nervy five-wicket victory against South Africa in their Super 12, Group 1 match in Abu Dhabi, UAE on Saturday. Aussie skipper Aaron Finch won the toss and elected to bowl, and his bowlers backed his call by taking early wickets. Mitchell Starc, Josh Hazlewood and Adam Zampa took two wickets each, while Glenn Maxwell and Pat Cummins claimed one apiece. For the Proteas, Aiden Markram scored 40 off 36. Aussie chase got off to a shaky start with Finch and David Warner early. But Steve Smith hit 35 off 34 to steady the ship, then Marcus Stoinis and Matthew Wade gave the finishing touch. Anrich Nortje took two wickets for the Proteas. Catch highlights and cricket scores of AUS vs SA, T20 World Cup match here:

Anrich Nortje on with his final over. Matthew Wade plays the first ball to backward point. Marcus Stoinis hits back and chance for caught & bowled. Difficult one, and saves a couple. A single to sweeper cover to rotate the strike. Another single. And a four as Stonis playes over mid-wicket. 10 from the over. Nortje's figures: 2/21. Australia need 8 runs in 6 balls. AUS - 111/5 (19)

Kagiso Rabada on with his final over. And ever-reliable Aiden Markram drops Matthew Wade at mid off and let the ball go for a boundary off the fourth. And four to end the over as Wade finds one at fine leg. Rabada's figures: 1/28. Australia need 25 runs in 18 balls. AUS - 94/5 (17)

Anrich Nortje returns for his third over. And he gets the big wicket of Steve Smith (35 off 34), courtesy a sensational Aiden Markram catch at deep. Marcus Stoinis is the new batter. AUS - 80/4 (14.5)

Tabraiz Shamsi on with his third over. Glenn Maxwell hits the first for a four, a slog sweep with some conviction. Seven from the over. Australia need 44 runs in 36 balls. 37 in 37 for Steve Smith-Glenn Maxwell stand. AUS - 75/3 (14)

Keshav Maharaj continues. Another good over for South Africa. Four singles and two dots. But they need wickets too. AUS - 55/3 (11)

Tabraiz Shamsi and Keshav Maharaj operating in tandem. Three singles then a four, hit by Steve Smith, as Shamsi concede eight in his second over. And Smith almost plays on one off the last ball. AUS - 47/3 (9)

Keshav Maharaj continues and he gets the wicket of Mitchell Marsh (11 off 17), caught by Rassie van der Dussen at deep. Glenn Maxwell joins Steven Smith in the middle. AUS - 38/3 (7.5)

Spin from both ends. Tabraiz Shamsi with his first over. Five from it - a double and three singles. AUS - 33/2 (7)

Bowling change and spin on. Keshav Maharaj leaks five in his first over -- three singles and a double. AUS - 28/2 (6)

Kagiso Rabada continues. David Warner hits the first ball for a four, then a dot. Rabada gets the wicket of Warner (14 off 15), caught by Heinrich Klaasen.  Steven Smith is the new batter for Australia. Seven runs and a wicket. AUS - 23/2 (5)

Anrich Nortje with his second over. Mitchell Marsh hits the first for a four, then negotiates the remaining five with some trouble. 16/1 (4).

Kagiso Rabada continues. David Warner hits the first and fourth balls for fours. Eight from the over. AUS - 12/1 (2)

Anrich Nortje with the second over. Three dots to David Warner, and at some pace. A single, then Aaron Finch is gone for a five-ball duck, caught by Kagiso Rabada at third man. Mitchell Marsh is the new batter. Two runs and a wicket in the over. AUS - 4/1 (2)

Kagiso Rabada with the first over. A dot to David Warner, then a single to cover. Four dots to Aaron Finch, interspersed with a wide. Two runs from the over. Target - 119

Mitchell Starc with the final over. Kagiso Rabada connects the second ball and it sails over long on boundary for the second six of the innings. A single, then Anrich Nortje (2 off 3) holes out at cover, caught by Aaron Finch. Tabraiz Shamsi is the last man. One sneaky bye and Rabada returns to face the final ball. He plays it deep mid-wicket and returns for a second. Dives and just make it. 35 runs in the last five overs. Rabada makes 19 off 23. SA - 118/9 (20).

Pat Cummins with the penultimate over. Five from it. Cummins' figures: 1/17. In the previous over, Mitchell Starc concedes three runs for one wicket. SA 106/8 (19)

Mitchell Starc strikes with the first ball in his third over. Aiden Markram (40 off 36), caught at deep mid-wicket by Glenn Maxwell. Anrich Nortje joins fellow pacer Kagiso Rabada in the middle. SA - 98/8 (17.1)

Josh Hazlewood returns for his final over, Aiden Markram launches the first ball for a six, over mid-wicket boundary. A wide, then a single. A dot to Kagiso Rabada, and a four. Straight. A yorker to the left-hander for a dot. Another one to finish the over. 12 from it. Hazlewood's figures: 2/19. SA - 98/7 (17)

It's going haywire for South Africa. Keshav Maharaj (0 off 2) is run out. The Proteas trying to steal a misfield off the third ball, but end up paying the price. No time to get back for Maharaj. Bullet throw from Glenn Maxwell at long on and Matthew Wade does the rest. Kagiso Rabada is the new man. SA - 83/7 (14.3)

Two in Adam Zampa's third over. Dwaine Pretorius (1 off 2), caught behind. Thick edge and no issues for Matthew Wade. Five runs from the over. 28 runs and two wickets in the last five overs. Keshav Maharaj is the new batter. SA - 82/6 (14)

Adam Zampa with his third over. A single to Aiden Markram, then a double as David Miller plays the second to cover. And Miller is given out, LBW. He takes the review but a wasted one. 34-run stand broken. Goes for 16 off 18. Dwaine Pretorius is the new batter. SA - 80/5 (13.3)

Glenn Maxwell finishes his spell. Eight from his fourth over, including a four off the last ball. Aiden Markram plays it to the vacant backward point. Maxwell's figures: 1/24. SA - 71/4 (12)

Glenn Maxwell with his third over. Another tidy over from the spinner. A double and three singles. SA - 59/4 (10)

Mitchell Starc returns for his second over. Aiden Markram hits the third ball for a four, his second, through cover. Eight from the over. SA - 54/4 (9)

Pat Cummins continues. And another wicket for Australia. Heinrich Klaasen (13 off 13) goes. Top-edge off the last ball, and caught by Steve Smith at backward point. David Miller is the new man. SA - 46/4 (8)

Aaron Finch introduces Adam Zampa, his fifth bowler today. Ten from it, including a four off the fifth, hit by Heinrich Klaasen to mid-wicket boundary. SA - 39/3 (7)

Pat Cummins gets his first over. Brilliant start. Three dots. Aiden Markram then hits the fourth ball for a four, through cover. And two singles. SA - 29/3 (6)

And wicket maiden of Josh Hazlewood. Stunning over and it will lift Aussie spirits, considering their not-so-ideal build-up to the tournament.

Josh Hazlewood continues, and he removes Quinton de Kock (7 off 12), bowled. The Proteas opener watches the ball rolls into the wickets and the bails fall off. What a mess. Trying to be cheeky and play a reverse flick the ball over short fine leg, but ends up playing the ball into the stumps after it hit his body. Heinrich Klaasen is the new man. SA - 23/3 (4.1)

Josh Hazlewood gets his first over. And the big wicket with the first ball. A beauty to send Rassie van der Dussen (2 off 3) back. A hint of movement and faint nick. Caught behind. Aiden Markram joins Quinton de Kock in the middle. SA - 16/2 (2.1)

Mitchell Starc with the new ball. Temba Bavuma plays the first ball to cover for a double. A dot, then back-to-back fours. Sublime timing, both through cover. A single off the fifth to strike to Quinton de Kock. A dot to end the over. 11 from it.

Australia win the toss and opt to field first against South Africa.