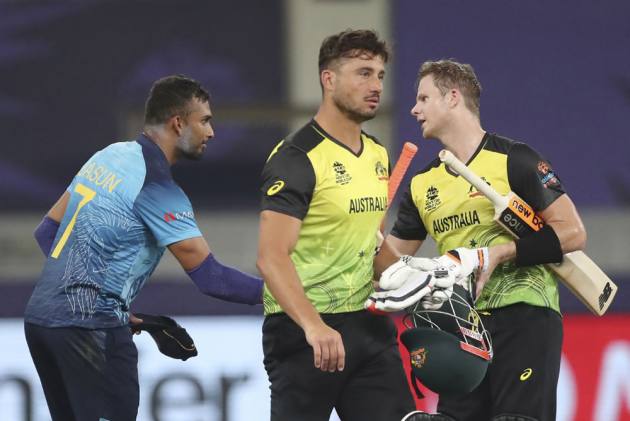 A reality check for Sri Lanka, and surely a warming-up for Australia. A boisterous Sri Lanka, unbeaten so far in the ICC T20 World Cup 2021, started their Super 12, Group 1 match in Dubai, UAE on Thursday on a rousing note with Kusal Perera (35 off 25) and Charith Asalanka (35 off 27) scoring freely. Then, the Aussies hit back with quick wickets with Adam Zampa, Pat Cummins and Mitchell Starc taking a brace each. From 78/2 in 9.4 overs, all Sri Lanka could do was post 154/6. Two struggling but dangerous batters, David Warner and Aaron Finch, then stitched a 70-run stand to lay a solid foundation for the Aussies. Finch, who won the toss and opted to bowl first earlier in the day, got out for 37 off 23, but Warner hit his first T20 World Cup fifty since 2012, and his 65 off 42 all but shut the doors on Sri Lanka. Steve Smith (28 off 26) and Marcus Stoinis (16 off 7) gave the finishing touches with the Aussies winning the match by seven wickets in 17 overs. And with that Australia ended Sri Lanka's winning run in the tournament. Australia, who had defeated South Africa by five wickets in their tournament opener, are second in the group behind England. Eoin Morgan's men are also with two wins. The traditional rivals face off on October 30. Sri Lanka, with one win and one defeat, are fourth after the end of the second round. They next face third-placed South Africa, also on October 30. Other two teams in the group, Bangladesh (5th) and West Indies (6th) clash on Friday.  Catch highlights and cricket scores of AUS vs SL, T20 World Cup match here.

Lahiru Kumara with his third over. A three off the first ball as Steve Smith plays it through cover. A dot, then a six. Marcus Stonis lifts it over long on. A single to long on. One more single, then Stonis hits the last ball for a four to long off. 15 from the over and seven-wicket win for Australia. AUS - 155/3 (17); SL 154/6 (20)

Skipper Dasun Shanaka introduces himself into the attack. And he gets the wicket of David Warner off the last ball, caught at long off by Rajapaksa. Warner goes for 65 in 42. Australia need 25 runs in 30 balls. AUS - 130/3 (15)

Dushmantha Chameera on with his third over. David Warner hits the third and fourth balls for fours. 12 from the over. Australia need 31 runs in 36 balls. AUS - 124/2 (14)

Maheesh Theekshana on with his final over. David Warner hits the first ball for a four, to midwicket boundary. A dot then a single to point for his fifty, in 31 balls. Eight from the over. Australia need 47 runs in 48 balls. AUS - 108/2 (12)

Lahiru Kumara returns for his second over. Steve Smith hits the third ball for a four, through cover. David Warner hits the last ball for a four. 13 from the over. AUS - 96/2 (10)

Wanindu Hasaranga continues. A four to backward point as Glenn Maxwell plays his favourite reverse sweep. A dot, then the Aussie all-rounder holes out, caught by Avishka Fernando at deep. Maxwell goes for 5 off 6. Steve Smith is the new man. AUS - 80/2 (8.3)

Maheesh Theekshana continues. David Warner hits the third ball for a four. Six from the over. AUS - 76/1 (9)

Bowling change. Wanindu Hasaranga, leg spinner, gets a four for the welcome from David Warner. A double, then a single. A dot to Aaron Finch, and the Aussie skipper drags one. Bowled. He goes for 37 off 23. Gleen Maxwell, the new man, almost drags the next ball. AUS - 70/1 (7)

Maheesh Theekshana returns for his second. David Warner hits the fourth ball for a four, to mid-wicket boundary. And a huge shout for LBW against Aaron Finch off the last ball. Nothing. Seven from the over. AUS - 63/0 (6)

Dushmantha Chameera with his second over. Aaron Finch hits the first ball for a six, over long on, then a four, behind square. A single, and wicketkeeper Kusal Perera drops David Warner. A dolly. A single off the next, then a front-foot no-ball. A dot off the free hit. 13 from the over. AUS - 56/0 (5)

Double bowling change. Lahiru Kumara on. David Warner takes a single, then Aaron Finch hits the next two balls for a four to mid-off, and a six over third man. A single to fine leg. And a streaky four as Warner finds an inside edge. The left-handed batter hits back the last ball for a four. Kumara slips and it saves him from being it. 20 from the over. AUS - 43/0 (4)

Dushmantha Chameera on. Aaron Finch welcomes him with a four, to mid on boundary. Eight from the over. AUS - 23/0 (3)

Maheesh Theekshana on. David Warner hits the second ball for a four, top edge to third man. Six runs from the over. AUS - 15/0 (2)

Chamika Karunaratne with the first over. David Warner takes a single off the first. A dot to Aaron Finch, then a cracking drive past point for a four. A dot, and a four. And dot. Nine from the over. Target - 155 runs.

Josh Hazlewood with the last over. Bhanuka Rajapaksa hits the first ball for a four, past extra cover fielder. One leg bye, then a single. A wide, then another leg bye. Another single to cover and Rajapaksa plays the last ball to cover for a single. 10 from the over. 49 from the last five. Hazlewood's figures: 0/26. Rajapaksa and Chamika Karunaratne returns undefeated on 33 off 26 and 9 off 6 respectively. SL - 154/6 (20)

Pat Cummins with his final over. Dasun Shanaka hits the third for a four, to extra cover. But gets a top edge off the next and caught by Matthew Wade. Sri Lanka captain goes for 12 off 19. Chamika Karunaratne is the new man. SL - 134/6 (17.4)

Josh Hazlewood returns for his third. Bhanuka Rajapaksa time his shot to perfection for a four, off the third. Half-volley and dismissed. Eight from the over. SL - 105/5 (15)

Mitchell Starc returns for his third. Wanindu Hasaranga gets a streaky four, to third man. Thick edge. Then caught behind. Australia take the review and they are vindicated. Hasaranga goes for 4 off 2. Skipper Dasun Shanaka joins Bhanuka Rajapaksa. SL 94/5 (12.2)

Adam Zampa on with his third over. A dot, a single, then a dot, and single. Avishka Fernando mistimes his shot and is caught at extra cover by Steve Smith. Fernando goes for 4 off 7. Wanindu Hasaranga is the new man. Two runs from the over. 30 runs and three wickets in the last five. SL - 90/4 (12)

Mitchell Starc returns for a second over. Avishka Fernando takes a single, to third man. Kusal Perera hits the next for a massive six, over long on. Starc responds with an unplayable yorker, middle stump. Perera goes for 35 off 25. Bhanuka Rajapaksa is the new batter. SL - 86/3 (10.3)

Adam Zampa continues. Three singles, then the wicket. Charith Asalanka (35 off 27) holes out, caught by Steve Smith at backward square leg. And a 63-run stand is broken. Avishka Fernando is the new batter. SL - 78/2 (9.4)

Bowling change. Marcus Stoinis on. Seven from the over -- three singles and a couple of doubles. SL - 60/1 (7)

Josh Hazlewood with his second over. Two dots to Charith Asalanka, then a single. Kusal Perera hits the fourth for a four, his second, through the cordon. Two singles to end the over. Seven from the over. SL - 53/1 (6)

Josh Hazlewood continues. Four dots, then Charith Asalanka hits the fifth ball for a four to mid-off boundary. A single to keep the strike. SL - 46/1 (5)

Bowling change. Glenn Maxwell on and Charith Asalanka welcomes him with a six, over mid-wicket boundary. A dot, quicker and flat. Asalanka sweeps the third for a four, then five wides, down the leg. A single, then two dots to Kusal Perera. 16 from the over. SL - 41/1 (4)

Bowling change. Pat Cummins on. Pathum Nissanka plays a delectable shot for a four, to square leg boundary. Then holes out, caught by David Warner at mid-off. He goes for 7 off 9. Charith Asalanka is the new man. SL - 15/1 (2.3)

Mitchell Starc with the new ball. Pathum Nissanka takes a single off the first ball. Then a double as Kusal Perera plays the second to backward point. Hint of swing. A dot, then a wide. Kusal Perera takes a single to rotate the strike. Another single, then a dot, Six from the over.

Australia are unchanged. One change for Sri Lanka. Maheesh Theekshana comes in for Avishka Fernando. Here are the playing XIs -

Australia win the toss and will bowl first against Sri Lanka in Dubai.