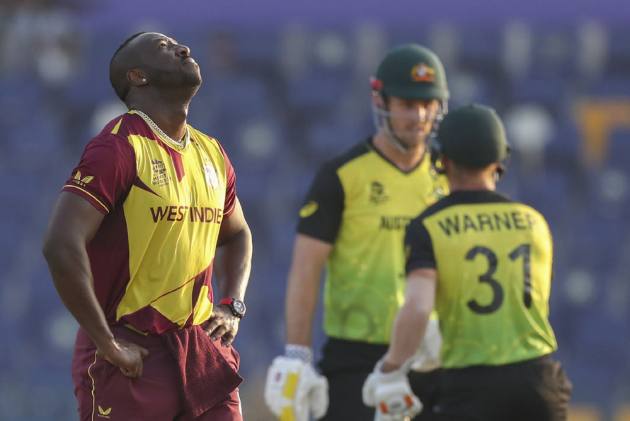 A brilliant David Warner hijacked Dwayne Bravo's swansong with an unbeaten 89 off 56 as Australia hammered defending champions West Indies in their final ICC T20 World Cup 2021, Super 12 match in Abu Dhabi, UAE on Saturday. The fact that the Windies are already eliminated from the tournament did little to dampen the Aussie spirits as Warner hit Jason Holder for a four to seal the eight-wicket win with 22 balls to spare. The win helped the Aussies tighten their grip on the second position. Group 1 is still open even after England's four wins in four. Eoin Morgan & Co are up against South Africa in the second match today, and if the Proteas win, three teams will be on eight points each. In such a case, who qualify for the semis will be decided on the net run rate. So, the Aussies will sit tight and wait for the ENG vs SA match. Aaron Finch won the toss and opted to bowl first. Josh Hazlewood took a four-wicket haul to help restrict the Windies to 157/7. For the Windies, skipper Kieron Pollard top-scored with 44 off 31.  Warner then stitched a 124-run stand in 75 balls with Mitchell Marsh (53 off 32) to all but settle the issue. Beyond the points table, it was Bravo's final international match and also possibly for Charis Gayle. And both the legends, just like the Windies' campaign, have had an underwhelming presence in the tournament. Catch highlights of AUS vs WI, T20 World Cup match here:

Chris Gayle gets his first over. A dot to David Warner then a wide. A dot, then a missed stumping off another wide. Two doubles, and a single. Scores are levelled. And Gayle takes a wicket. Mitchell Marsh hits the last ball straight to Jason Holder at cover. And with that a 124-run stand in 75 balls is broken. He goes for 53 off 32. Seven from the over. AUS - 157/2 (16)

Not the swansong Dwayne Bravo was expecting. David Warner hits four and six off the fourth and fifth balls. 17 from Bravo's final international over. His figures today: 0/36. Australia need 8 runs in 30 balls. AUS - 150/1 (15)

Andre Russell with his second over. David Warner hits the third ball for a four, over short fine leg. Nine from the over. Australia need 44 runs in 48 balls. AUS - 114/1 (12)

Hayden Walsh with his second over. David Warner launches the first ball for a six, over mid-wicket. A double to mid-wicket and fifty for Warner, in 29 balls. 10 from the over. Australia need 76 runs in 66 balls. AUS - 82/1 (9)

Akeal Hosein on the trot. David Warner hits the second ball for a six, over deep and a four off the fifth, to backward point. 12 from the over. AUS - 53/1 (6)

Akeal Hosein returns for his second. Two dots then the wicket of Aaron Finch. Plays on. Aussie skipper goes for 9 off 11. Mitchell Marsh is the new man. AUS - 33/1 (3.3)

Jason Holder on with his first over. David Warner hist back-to-back fours off the fourth and fifth, then a six to end the over. 15 from the over. In the previous over, Roston Chase conceded 13, including two fours hit by Aaron Finch. AUS - 33/0 (3)

Mitchell Starc with the last over. A dot then the wicket of Kieron Pollard, caught by Glenn Maxwell at long on. Windies skipper goes for 44 off 31. Jason Holder joins Andre Russell for the last four remaining balls. Two singles, then a 111m-long six over from Russell over deep midwicket for his first of the tournament. And one more, this time over long on. 14 from the over. 58 in the last five. Starc's figures: 1/33. WI - 157/7 (20)

Pat Cummins with the penultimate pover. Andre Russell gets a four off the second, to fine leg. Seven from the over. Cummins' figures: 1/37. In the previous over. Josh Hazlewood conceded 13, including two fours. His figures: 4/39. WI - 143/6 (19)

Josh Hazlewood returns for his final over. An inside edge off the first and Keiron Pollard takes a double. A single, then the wicket. Dwayne Bravo goes for 10 off 12 with a sliding David Warner taking a catch at long on. That's Bravo's final international knock. WI - 126/6 (17.3)

Mitchell Marsh with his third over. Five from it, two doubles and a single. In the previous over, Adam Zampa conceded two singles to end his spell. His figures: 1/20. 26 runs in the last five. WI - 99/5 (15)

Josh Hazlewood returns for his third wicket. And Shimron Hetmyer is walking. Caught behind off the fifth. Hetmyer goes for 27 off 28. Dwayne Bravos is the new man. This is his last game for the Windies. WI - 91/5 (12.5)

Adam Zampa on with his third over. Kieron Pollard hits the last ball for a four for his first boundary. Six from the over. 34 runs and one wicket in the last 30 balls. WI - 87/4 (12)

Adam Zampa strikes in his second over. Shimron Hetmyer takes a single off the first, then Evin Lewis hits the next for a four. But Lewis fails to control his next shot, and ends up offering a catch to a diving Steve Smith at long on. He goes for 29 off 26. WI - 70/4 (9.3)

Glenn Maxwell gets his first over. Evin Lewis hits the fourth ball for a four to fine leg boundary. And fifty for the Windies. And two dots. Six runs from the over. WI - 50/3 (6)

Josh Hazlewood continues, and he strikes with the first ball of the fourth over. Nicholas Pooran hits straight to Mitchell Marsh at cover. Pooran goes for four off four. Roston Chase is the new man. WI - 35/2 (3.1)

Bowling change. Chris Gayle welcomes Pat Cummins with a six, over long-on. Then gets out. Bowled. He goes for 15 off 9. And that little cameo could be his last knock for the Windies. Nicholas Pooran is the new batter. WI - 30/1 (2.2)

Josh Hazlewood shares the new ball. Evin Lewis hits the first three balls for fours, then a single. Chris Gayle hits the fifth for a six, over midwicket. A leg bye to end the over. 20 from the over. WI - 24/0 (2)

Mitchell Starc with the new ball. Chris Gayles takes a double off the first, an inside edge. A single, then a leg bye as Evin Lewis misses his flick. And three dots. Four from the over.

Australia are unchanged. One change for West Indies with Hayden Walsh coming in for Ravi Rampaul. Dwayne Bravo is playing his last match for the Windies. And there's a general feeling that Chris Gayle is also playing his last for the team.

Australia win the toss and will bowl first against West Indies.