Consistent rains have once again came into play as the first T20 between Australia women and India women has been called off. India were at 131/4 in 15.2 overs when rain gods came in. 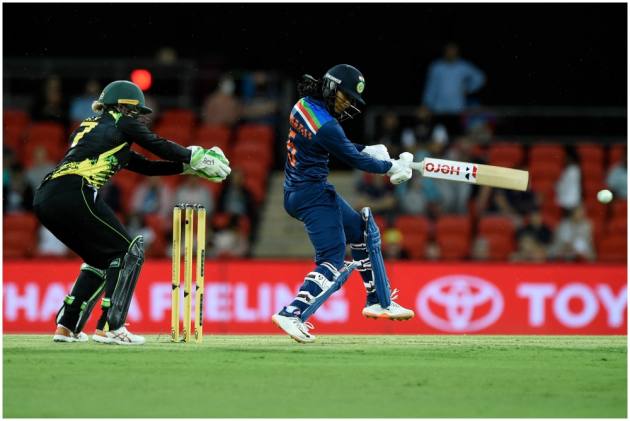 A confident Indian women's cricket team will hope to take their ODI and Test form into the three-match T20 international series against the Australian women's cricket team. The T20 series, starting today, will be played in Carrara in Gold Coast, Queensland. The one-off pink ball Test between AUS vs IND was also played here. It ended in a draw but India had the upperhand in the historic Test much of which was lost to bad weather. Australia and Indian women have more or less shared honours in the last five T20 internationals played between them. The last match between AUs vs IND was played on March 8, 2020 where the Aussies defeated India by 85 runs in the final of the ICC Women's T20 World Cup final at the Melbourne Cricket Ground. Indian women will not have happy memories of that match after being skittled out for 99, chasing Australia's 184 for four. This time, the Indian girls are looking good and with a fit-again Harmanpreet Kaur raring to go, she has quite a few in-form players like Smriti Mandhana and Shafali Verma to bank on in the shortest format of the game. Follow live cricket scores and live updates of AUS vs India here.

This is something both teams didn't have asked for. The match has been called off due to continuous rains. The rain hasn't cleared in time to get Australia's innings started before the cut-off.  India and Australia both receive 1 point each and now the multi-format scorecard stands at 7-5 for Australia.

Jemimah Rodrigues became the youngest player to reach 1000 T20 international runs during her unbeaten 49. She did it in 21 years and 32 days

Due to relentless rain, India’s innings has been completed. Australia will commence their innings when play can be restarted and available overs is confirmed. Bad luck for Jemimah as she was one shy of a brilliant half-century. India end their innings at 131/4 in 15.2 overs.

Oh No! Rain Gods have opened up once again. Slight drizzle and it’s not looking for like a heavy shower. The supersoppers are doing their work.

Harmanpreet Kaur's 5-ball cameo comes to an end as she falls plumb in front for 12 off Sophie Molineux. India 55/3 after 6 overs.

Ash Gardner derails India’s perfect start dismissing both the openers for in the fourth over. While Shafali Verma was out for 18, Smriti Mandhana went home for just 17. Harmanpreet Kaur and Jemimah Rodriguez are currently at the crease. India 46/2 after 5 overs.

Hanna Darlington and Tahlia McGrath have been given their maiden Australia T20 caps. For India, Renuka Singh and Yastika Bhatia are making their first t20 international appearances. Richa Ghosh will keep wickets.

Australia have won the toss and they will bowl first.

The one thing that India need to maintain is their attacking content with the bat. Considering the firepower Australia posses in their ranks, the opening will be crucial for India as it will play a huge factor for Harmanpreet Kaur's side.

Hello and welcome to Outlook India live blog for the first T20 international between Australia Women and India Women in Carrara today. It's going to be an exciting contest considering the form India are in at the moment.

UpdateDue to relentless rain, India’s innings has been completed. Australia will commence their innings when play can be restarted and available overs is confirmed. Bad luck for Jemimah as she was one shy of a brilliant half century. India end their innings at 131/4 in 15.2 overs.