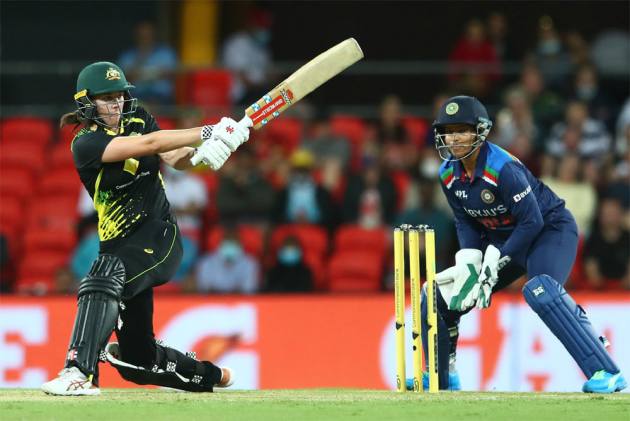 Australia captain Meg Lanning won the toss and put India in to bat first in the second T20I cricket match at Carrara Oval, Queensland on Saturday. After a poor start, India found late runs from Pooja Vastrakar (37) and Deepti Sharma (16 off 19) as they posted 118/9. Sophie Molineux (2/11 in four overs) and Tayla Vlaeminck (2/18 in three overs) were brilliant with the ball for Australia, taking a couple of wickets each. India gave themselves a good account in defence by getting early wickets, but a target of 119 was always going to a be tricky one against the world champions. Shikha Pandey gets the wicket of Alyssa Healy with the second ball of the innings, then Rajeshwari Gayakwad removed Meg Lanning in the seventh to keep India in the hunt. But Beth Mooney (34 off 36) and Tahlia McGrath (42 not out off 33) played crucial knocks to deny India a morale-boosting win. With that, Australia have sealed the multi-format series -- 2-1 in the ODIs, draw in lone Test, and 1-0 lead in the T20Is. Catch highlights and cricket scores of AUS-Women vs IND-women here.

Pooja Vastrakar on with the last over, and only the formalities left. Tahlia McGrath fittingly hit the winning run, a single. She remains unbeaten on 42 off 33. Australia win by four wickets with five balls to spare. And with that, the Southern Stars take a 1-0 lead. The series finale on Sunday, same time, same venue.

Renuka Singh returns for her final over. Tahlia McGrath hits fours off the first two deliveries to make it 6 off 10 for Australia. India need a wicket. A full toss and McGrath plays it to square leg for a couple. Now a hit away. A single, then another one. Aussies need 2 in 7 balls. Scores tied with a single.

Rajeshwari Gayakwad and Richa Ghosh again. Nicola Carey, coming down, misses the flight and the ball richocheted from Ghosh's pad and crashes into the stumps. Counts as stumping. Carey gone for 7 off 8. Georgia Wareham is the new batter. AUS - 94/6 (16.4)

Rajeshwari Gayakwad returns for her third over, and strikes with the first ball. Dangerous Beth Mooney (34 off 36) is stumped. Nice work behind the wickets by Richa Ghosh. Nicola Carey joins Tahlia McGrath in the middle. AUS - 71/5 (13.1)

India back in the game with three quick wickets. While Meg Lanning falls to Rajashwari Gayakwad, Harmanpreet Kaur picks up Ashleigh Gardner to give the hosts a setback. Deepti Sharma accounted for Ellyse Perry. Australia 51/4 after 9.1 overs.

Back in the business after a brief period, Shikha Pandey has struck in the second ball of the Australian innings.  India off to a fine start with dangerous Alyssa Healy back in the hut for just four. Skipper Meg Lanning (3*) and Beth Mooney (9*). Australia 16/1 after 4 overs

Three fours and two sixes in the last three overs from Pooja Vastrakar and some beautiful running between the wickets helped India post 119/9 at the end of 20 overs. At times, it looked like the visitors won't be crossing the 100-run mark but Vastrakar's late cameo of 26-ball 37 gave the Indian bowlers something to defend.

Two wickets in an over. After Deepti Sharma falls short of the crease for just16, Shikha Pandey comes and goes without troubling the scorers. India 78/8 after 16 overs.

Nothing going India's way today. The Indian batters have been faulty in playing rash shots today and Richa Ghosh joins the list. She glances down the track and swings the ball blindly to see her stumps disturbed. India 61/6 after 12 overs.

Disaster for India. The Women in Blue have their playing XI back in the hut with just 54 runs on board. Yastika Bhatia was run out of 8.

Harmanpreet Kaur decides to take the mantle. The Indian skipper dispatches Ellyse Perry for three fours in an over to ease out the pressure before being stumped for 28. India 50/4 after 8.5 overs.

Not a lucky day for Jemimah Rodrigues. The right-hander glances down the wicket and plays across the line, gets the time wrong to straight into the hands of Hannah Darlington. She goes for just 7 off Sophie Molineux. India 25/3 at the end of Powerplay.

India in trouble. After dismissing Smriti Mandhana in the first over, Tayla Vlaeminck sends back Shafali Verma in the hut too. Harmanpreet Kaur joins Jemimah Rodrigues in the middle. India 12/1 after 3 overs.

Tayla Vlaeminck Gives Australia the first breakthrough as she dismissed Smriti Mandhana for just one. Jemimah Rodrigues joins Shafali Verma in the middle. India 5/1 after 1 over.

Australia have won the toss and they will bowl first. Both teams are playing with the same XI.

Hello and welcome to another coverage of the Australia Women vs India Women. 2nd T20. Australia are 7-5 ahead in this multi-format series and a win today will confirm the series to them. Meanwhile, India who were 131/4 after 15 overs in the first match before the rain came down, aren't to be left out. Hopefully, rain gods stay away today so that we can have an exciting finish.