India were 276 for five when the match was halted on the second day. Catch Day 2 highlights and cricket scores of AUS Women vs IND Women, Day-Night Test here. 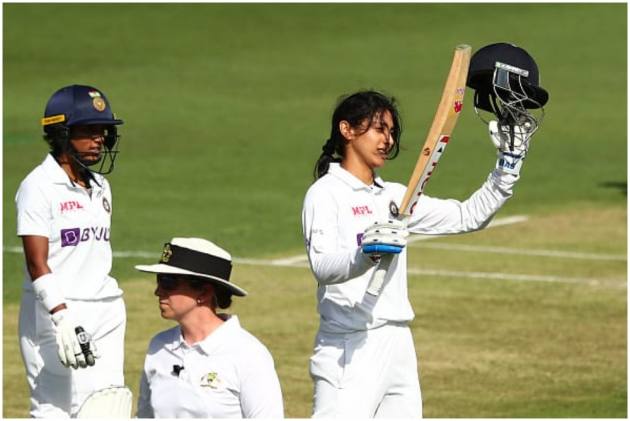 Lightning and rain forced early stumps on Day 2 of the one-off Day-Night Test between the Indian women's cricket team and Australia at Carrara Oval, Queensland Friday. India were 276 for five in 101.5 overs when the match was halted in the second session. Deepti Sharma was batting on 12 and Taniya Bhatia was yet to open her account as the players walked off the field and the covers were brought on. India lost two wickets in the session, including that of skipper Mithali Raj for 30 and debutant Yastika Bhatia for 19.  Earlier, flamboyant opener Smriti Mandhana shattered a few records en route to slamming a magnificent maiden Test century as India progressed to 231/3 at the dinner break. The 25-year-old Mandhana became the first Indian woman to hit a century in day-night Tests and also the first from the country to reach three figures in the game's traditional format on Australian soil. Mandhana made 127 off 216 balls with the help of 22 boundaries and a six at the Carrara Oval, and added an Indian record of 102 runs in Australia for the second wicket with Punam Raut (36), continuing the good work after putting on 93 with Shafali Verma on a rain-marred opening day. Action will resume 30 minutes early (9:30 AM IST) on Day 3, Saturday (October 2). The plan is to have 108 overs bowled on each of the last two days of this historic match. But considering the trends on the first two days, it's very unlikely. Catch highlights and cricket scores of Australian women vs Indian women here.

Play has been suspended for the day. It's stumps on Day 2.

That was the last official word shared by @AusWomenCricket on Twitter a while ago. Unfortunately, no signs of starting the match.

Play will resume when possible! https://t.co/ryyEQdgieM

Umpires are expected to have an inspection at 4:00 PM IST. There was a 'storm warning'.

Tea has been announced at the Carrara Oval. However, there are no signs of the stoppage of rain. Hopefully, it doesn't wash the day away. India 276/5.

Lightning strikes once again after Day 1. The players are off the field. It was expected to have thunderstorms at this time of the day. The pitch has been fully covered as a precaution. No rain till now. India 276/5 with Taniya Bhatia (0*) and Deepti Sharma (12*) batting.

Dinner break here at Queenstown. Two wickets have fallen for India in the first session, in the form of overnight batters in Smriti Mandhana and Punam Raut. India 231/3 after 84 overs.

Double century for India women. Punam Raut flicks Darcie Brown for a single to bring help India at 200/2.  Raut (33*) and Mithali Raj (1*) are currently at the crease.

Something to cheer about for Australia. Smriti Mandhana chips straight at the hands of Tahlia McGrath, off Ashleigh Gardner.  An exciting Smriti Mandhana departs for 127 from 216 balls. Skipper Mithali Raj joins Punam Raut in the middle. India 195/2.

Smriti Mandhana races her way to her maiden Test century in style. The opener pushes Ellyse Perry for a four to achieve the milestone. She also becomes the first Indian woman to hit a century in a pink ball Test. India 158/1. Smriti Mandhana is batting at 102 not out. Punam Raut giving company at 19 not out.

Early reprieve for Smriti Mandhana at the start of Day 2. The opener smacks directly at the hands of Beth Mooney at cover-point, but Ellyse Perry has overstepped. No Ball! Big moment in the match both for India and Australia.  India 135/1. Smriti Mandhana (81*) and Punam Raut (17*).

Straight drives don't get much better than that.