Pakistan chased down a paltry target of 109 runs with relative ease in the 2nd T20I against Bangladesh. Catch highlights of the BAN vs PAK cricket match here. 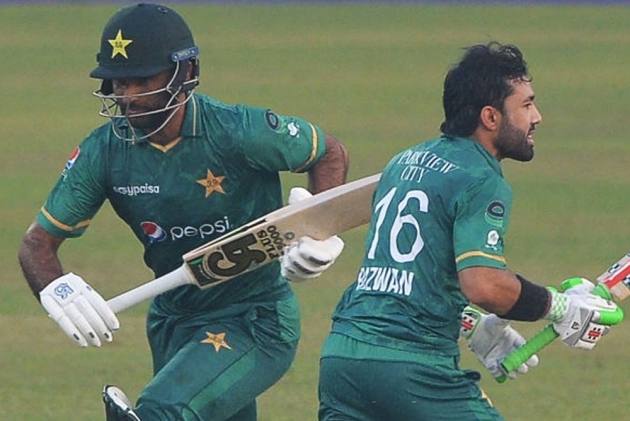 Two days, two easy wins. That's what Pakistan are doing in Bangladesh in their first tour in five years. After a four-wicket win in the tour opener on Friday, Pakistan produced yet another clinical performance to decimate a clueless Bangladesh side at Shere Bangla National Stadium, Dhaka on Saturday.

Bangladesh won the toss and opted to bat first again, and they failed miserably again -- posting only 108/7 despite a valiant knock from Najmul Hossain Shanto (40 off 30). For Pakistan, Shaheen Afridi and Shadab Khan got a couple of wickets each.

Pakistan captain Babar Azam could manage only a single off five balls, but Mohammad Rizwan (39 off 45) and Fakhar Zaman (57 not out off 51) added 85 runs in 78 balls to all but seal the win. Zaman won the player of the match award for his unbeaten knock. The third and final T20I will be played on Monday (November 22) at the same venue.  Catch highlights of the second BAN vs PAK, T20I match here:

Another part-timer on. Afif Hossain starts with a dot, then a four to backward point boundary as Haider Ali times it beautifully. A dot then a single. A single off the last and six from the over. Pakistan need 1 in 12. PAK - 108/2 (18)

Bangladesh have given up. Najmul Hossain Shanto on with his part-time spin. A single, then two dots to Haider Ali. And two wides. Two more dots to Fakhar Zaman. Three from the over. Pakistan need 7 runs in 18 balls. PAK - 102/2 (17)

Aminul Islam with his final over. Mohammad Rizwan gets a life off the first ball. Dropped. a single, then finally a wicket. Rizwan goes for 39 off 45, caught by Saif Hassan at backward point. Haider Ali is the new man. And with that 85-run stand is broken. Four runs from the over. Aminul Islam's figures: 1/30. Pakistan need 10 runs in 24 balls. PAK - 99/2 (16)

Mustafizur Rahman returns for his second over. But leaves the field after delivering the first ball. Shoriful Islam completes the over. 8 runs from the over, including a six, hit by Fakhar Zaman over third man. Mohammad Rizwan (36 off 41) and Fakhar Zaman (42 off 38) are in complete control. Pakistan need 26 runs in 36 balls. PAK - 83/1 (14)

Aminul Islam continues. He starts with a wide. Saif Hassan drops Fakhar Zaman at deep mid-wicket off the second and it goes for a four. Then, Mohammad Rizwan hits the fourth for a four, over extra cover. 13 runs from the over. Pakistan need 38 runs in 48 balls. Also fifty-run stand. PAK - 71/1 (12)

Aminul Islam with his second over. Mohammad Rizwan hits the second ball for a four. Nine from the over. Pakistan need 59 runs in 60 balls. PAK - 50/1 (10)

Six to finish the over. Fakhar Zaman rolls his bat over covers for a maximum off the bowling of Mustafiur Rahman. Pakistan 24/1 (5)

Mustafizur gives Bangladesh early breakthrough.  Babar Azam tries to drive a length ball but gets inside edge onto his stumps, bowled. Pakistan 12/1 (3)

Chasing a below-par 109, Pakistan have started it slowly with Babar Azam and Mohammad Rizwan taking their time in the middle. Pakistan 9/0 (2)

A strong bowling performance from Pakistan has restricted Bangladesh to 108/7 in 20 overs. Najmul Hossain Shanto top-scored for Bangladesh with 40 while for Pakistan Shaheen Afridi and Shadab Khan took two wickets each.

Pretty disappointing display from Bangladesh. The hosts lose their sixth with Mahedi Hasan, caught and bowled off  Mohammad Nawaz for three. Bangladesh 88/6 (15.3)

Pakistan bowlers have certainly choked the host's batsmen.  Mahedi Hasan (1*) and Nurul Hasan (2*) are currently at the crease. Bangladesh 85/5 (15)

Mahmudullah's rough patch with the bat continues. The Bangladesh skipper tries to play the ball cheekily opening the face of the bat but ends up giving a simple catch to wicketkeeper Mohammad Rizwan for just 12. Bangladesh 81/4 (13)

Seven runs to finish the 10 over as Bangladesh are 64/3 at the halfway stage. Mahmudullah (*2) and Najmul Hossain Shanto (34*) are currently at the crease.

Haris Rauf gets his first over. Najmul Hossain Shanto hits the last ball for a four. Six from the over. Shanto and Afif Hossain add 31 runs for the third wicket. BAN - 36/2 (6)

Bowling change. Shoaib Malik on. Najmul Hossain Shanto hits the third ball for a four, to square leg boundary. Seven from the over. BAN - 30/2 (5)

Mohammad Wasim Jr also strikes in his first over. Mohammad Naim (2 off 8), caught by Fakhar Zaman. Three runs and a wicket from the over. Afif Hossain is the new man. BAN - 5/2 (2)

And it takes five deliveries for Shaheen Afridi to strike. He traps Saif Hassan in front, for a first-ball duck. Bangladesh also lose the review. Najmul Hossain Shanto is the new man. BAN - 1/1 (0.5)

'We are playing on a new pitch... The grass is well rolled and the surface looks compact, should be good for batting,' Ed Rainsford with the pitch report a while ago.

Pakistan are unchanged. For Pakistan, Shaheen Afridi comes in for Hasan Ali.

Bangladesh would have discovered on Friday that Pakistan's famous top-order batting is not invincible. Pakistan may have two of the world's leading T20 batters in Mohammad Rizwan and captain Babar Azam but if the first Bangladesh vs Pakistan match was any indication, there is always an element of vulnerability that good bowlers can exploit.

Pacer Taskin Ahmed (2/31) did that to some extent but Bangladesh will need more discipline in the death overs to restrict Pakistan to a total that is chaseable or defendable. Bangladesh won the toss on Friday and decided to bat. It was a brave decision but they did not put up enough runs on the board. Mahedi Hasan's late blitz (unbeaten 30 off 20 balls) gave the innings some respectability after Bangladesh were 15 for three in the fifth over.

Pakistan collapsed to 24 for four chasing Bangladesh's 127 for seven. With three overs to go, the first T20 between BAN vs PAK was in balance till Shadab Khan and Mohammad Nawaz slammed two sixes each to take the game away from the hosts.

Bangladesh are still digesting the bitter taste of a horror T20 World Cup campaign where they lost all their five matches in the Super 12 stage. Bangladesh were stunned by Scotland in the qualifiers but still made it to the Super 12. Friday's loss was their seventh in eight games and Bangladesh need to turn around to keep the T20 series alive and then stay confident for the Test series that follows.