Bangladesh almost produced a stunning win in the third and final T20I match against Pakistan. Catch highlights of the BAN vs PAK cricket match 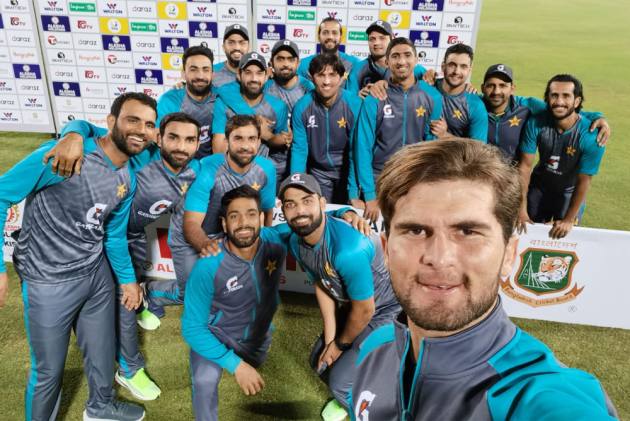 After 116 overs and three balls, Bangladesh finally found their window of opportunity to beat T20 World Cup semi-finalists in the three-match T20 International series with skipper Mahmudullah bravely introducing himself into the attack Monday evening in Dhaka. Pakistan, chasing yet another middling target of 125 runs, needed 8 from the last over to complete a 3-0 series sweep. Then drama unfolded.

Mahmudullah produced a dot, then forced come-back man Sarfaraz Ahmed to go for the glory shot, and is caught. Haider Ali, who's playing a fine innings (45 off 38) fell to the same play the very next ball. Then Iftikhar Ahmed launched a six, but holed out the next ball. And after some more drama involving a pull-out and stopping on the stride, Mohammad Nawaz hit a four.  A five-wicket win!

Earlier, Bangladesh won the toss and elected to bat first.  But they once again failed to post a big enough total to intimidate Pakistan. 127/7 in the tour opener and 108/7 in the second T20 International. And 124/7 today as Pakistan bowlers continued to produce the goods. Debutant Shahnawaz Dahani takes a wicket in his first over, then Mohammad Wasim Jr and Usman Qadir got a brace each. Opener Mohammad Naim top-scored for Bangladesh with a 50-ball 47. The two teams will now play a two-match Test series, starting November 26 in Chattogram. The second Test in Dhaka starts December 4. The series is a part of the ICC World Test Championship. Catch highlights and cricket scores of BAN vs PAK third T20I.

More drama. Batter not ready, apparently. Mohammad Nawaz pulls away at the last moment. Mahmudullah then stops in his delivery stride . And a four to long off as Nawaz seals the win. A last-ball thriller to end the series. Five wicket win for Pakistan and 3-0 to take home. PAK - 127/5 (20); BAN - 124/7 (20)

Iftikhar Ahmed hits the fourth ball for a six, over long off and Pakistan need two in two. And wicket. Iftikhar holes out at gully, caught by sub fielder Yasir Ali. He goes for 6 off 2. Pakistan need 2 runs in 1 ball. And Mohammad Nawaz is the new man.

Mahmudullah introduces himself into the attack with his part-time spin. Some challenge. A dot to Sarfaraz Ahmed, then the wicket. Slog sweep and caught by Mohammad Naim. Sarfaraz goes for 6 off 12. Iftikhar Ahmed is the new man. And another wicket. Same play, Haider Ali (45 off 38) caught by Shanto. Mahmudullah on a hat-trick. Khushdil Shah joins Iftikhar in the middle. Pakistan need 8 runs in 3 balls.

Shahidul Islam with the penultimate over. Good start. A dot then a single. Then a no ball for height. Ball slips and beamer to Sarfaraz Ahmed. Free hit. Haider Ali manages only a single, to
extra cover. A dot then and a single. A couple to long on. Seven from the over. Pakistan need 8 in the last over. Shahidul Islam's figures: 1/33 in 3.5 overs. PAK - 117/2 (19)

Shahidul Islam returns for his second over and he strikes. Mohammad Rizwan drags on. Maiden wicket fort Shahidul Islam. Rizwan goes for 40 off 43. Sarfaraz Ahmed is the new man. A leg bye for the new man, and Haider Ali launches the third for a six, over long on. A wide, then a dot. Ali hits another six, over long on. A couple to end the over. 16 from the over. Pakistan need 26 runs in 24 balls. PAK - 99/2 (16)

Nasum Ahmed completes his spell. Eight from his last over, including a four off the last ball, hit by Mohammad Rizwan. First for the Pakistan opener. Nasum's figures: 0/20. Pakistan need 79 runs in 60 balls. PAK - 46/1 (10)

Aminul Islam gets the big wicket of Babar Azam. Pakistan captain goes for a pull shot but finds Mohammad Naim. Azam goes for 19 off 25. Haider Ali is the new man. PAK 32/1 (7)

Shahidul Islam continues. Three singles from it. In the previous over, Babar Azam hit Nasum Ahmed for a four, off the second ball. So far, Bangladesh bowlers are keeping it tight. Pakistan need 97 runs in 84 balls. PAK - 28/0 (6)

Shohidul Islam with his first oveer. A single off the first ball, then two dots. Babar Azam hits the first boundary of the innings, a four to long on off the fourth ball. Eight from the over. In the previous over, Nasum Ahmed conceded two singles. PAK - 17/0 (4)

Mahedi Hasan with the first over. Mohammad Rizwan takes the strike. Two dots then a single to give the strike to Babar Azam. Three singles from the over. Target for Pakistan - 125 runs.

Haris Rauf with the final over. Bangladesh captain Mahmudullah launches the first, but finds Mohammad Wasim waiting at square leg. Mahmudullah goes for 13 off 14. Aminul Islam joins Mahedi Hasan in the middle. Hasan hits the fifth ball for a four, to third man. Freakish. Thickish edge. A run out to end the innings. Aminul Islam takes a suicidal second. Eight runs from the over. Rauf's figures: 1/32. 35 runs and four wickets in the last 30 balls. BAN - 124/7 (20)

Mohammad Wasim Jr breaks a 31-run stand. Mohammad Naim (47 off 50), caught and bowled off the third ball. Nurul Hasan joins Mahmudullah in the middle. Hasan finds a four off the fifth ball, a gentle flick to the fine leg. And Usman Qadir takes a fine diving catch at deep to end Hasan's little cameo. Six and two wickets in the over. Wasim's figures: 2/15. BAN - 116/5

Haris Rauf returns for his third over. Mahmudullah hits the fifth ball for a four, one bounce to fine leg boundary. Bangladesh clearly struggling to find boundaries. The last one, a six was in the 15th. 10 from the over. In the last over, Mohammad Wasim Jr leaked five runs, including one bye. And 36 runs in the last 30 balls. BAN - 110/3 (18)

Usman Qadir with his final over. A dot then the wicket of Afif Hossain. Bangladesh batter goes for a sweep but ends up getting caught a thick edge, and caught by the wicketkeeper. Hossain was involved in a 43-run stand with Mohammad Naim. Mahmudullah is the new man. Naim hits the fourth ball for a six, over mid-wicket. Nine from the over. Qadir's figures: 2/35. BAN - 89/3 (15)

Usman Qadir continues. Two dots, then a six over as Mohammad Naim pulls with come conviction. A dot then a four to square leg boundary. 10 from the over. BAN - 52/2 (10)

Mohammad Wasim Jr with his second over. Just two singles. In the previous over, Shahnawaz Dahani was hit for fours off the last two balls by Shamim Hossain. BAN - 25/1 (5)

Debutant Shahnawaz Dahani shares the new ball. Najmul Hossain Shanto hits the first ball for a four, a wide then a dot. And wicket. Shanto (5 off 5) is bowled. Shamim Hossain is the new man. Nine runs and a wicket from Dahani's first over in international cricket. BAN - 11/1 (2)

Mohammad Nawaz with the new over. Two singles. Mohammad Naim and Najmul Hossain Shanto are the openers for Bangladesh.

So the news from the middle is that Bangladesh have won the toss and elected to bat first in the third T20I against Pakistan. Shahidul Islam to debut for Bangladesh, while Shamim Hossain and Nasum Ahmed come in. Saif Hassan, Mustafizur Rahman and Shoriful Islam sit out. Mustafizur and Shoriful have a side strain and groin issue, respectively. Saif has been sent Saif to prepare for the first Test.

There is a news from the visiting Pakistan side. Shahnawaz Dahani to debut today. He said he hasn't slept the whole night. Big day for the 23-year-old pacer.

Hello and welcome to the third and final T20I between Bangladesh and Pakistan from Dhaka. Pakistan have already won the series and will look for a clean sweep. On the other hand, can Bangladesh avoid it and end their seven-match losing streak in T20Is? For that we have to wait and watch. Also, Pakistan's veteran Shoaib Malik has made himself unavailable for the match and departed for Dubai as his son is not well.

Nothing has gone right for Bangladesh in this home series. Fakhar Zaman hit 57 not out to guide Pakistan to an eight-wicket victory over Bangladesh that clinched the three-match Twenty20 series 2-0 on Saturday. Fakhar Zaman and opener Mohammad Rizwan put on an 85-run stand that was instrumental in overhauling Bangladesh’s paltry 108-7 with 11 balls to spare. Rizwan scored a patient 39 off 45 with four boundaries.

Pakistan have been just wonderful in this format of the game and with the next T20 World Cup in Australia a year away, the T20 World Cup 2021 semifinalists will have plenty of time to finetune themselves. The process could start from Monday itself with Pakistan testing their bench.

Bangladesh have a lot of work to do. They have looked out of depth starting from the Super-12 stage of the T20 World Cup. Minus Shakib Al Hasan, Tamim Iqbal and Mushfiqur Rahim, Bangladesh have looked a house in despair and much below par. They have do a lot to repose the faith in their fans.