After conceding a crucial 44-run lead in the first innings, Pakistan hit back and took four early wickets as Bangladesh found themselves tottering at 39/4. Catch Day 3 highlights and scores of the first BAN vs PAK Test. 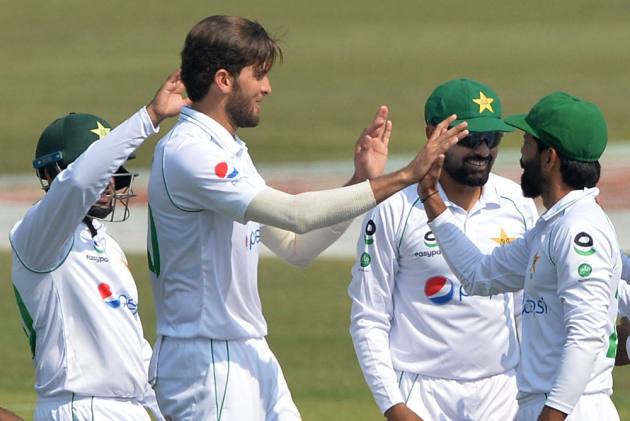 One fascinating day of Test cricket in Chattogram. 14 wickets on the day as Bangladesh and Pakistan continue to trade blows in the first Test. Pakistan, after that stupendous opening stand from Abid Ali (133) and Abdullah Shafique (52), looked prime to overtake Bangladesh's first innings total of 330 runs, but they ended up conceding a 44-run lead with left-arm spinner Taijul Islam claiming seven wickets. Then, Shaheen Afridi claimed three wickets early in Bangladesh's second innings to limit the damage. In fact, with the hosts tottering at 39/4, Pakistan will fancy their chances. At the close of play on Day 3, Bangladesh were 83 runs ahead with Mushfiqur Rahim and Yasir Ali unbeaten on 12 and 8 runs respectively. Catch Day 3 highlights and cricket scores of the first PAK vs BAN Test match.

Hasan Ali gets his first. Mominul Haque out for a two-ball duck, caught by Azhar Ali at short mid-wicket. Mushfiqur Rahim is the new batter. BAN 15/3 (6)

Shaheen Afridi gets both Shadman Islam (1 off 12) and Najmul Hossain Shanto (0 off 2). Skipper Mominul Haque joins Saif Hassan in the middle as Bangladesh look to set a big target for Pakistan. BAN - 14/2 (5) & 330

Bangladesh have come out to bat. Shadman Islam and Saif Hassan are in the middle. Bangladesh 14/0

And Taijul finishes it off for Bangladesh. He picks his seventh in the innings, dismisses Faheem Ashraf for 38, to register his career-best figures of 7/116 as Pakistan were all out for 286. Bangladesh take a crucial 44 run lead. Tea has been called.

Celebration time for Taijul Islam as he picks his fifth and soaks in the achievement. Hasan Ali, stumped by Liton Das for 12. Pakistan 233/7

Finally, the wicket Bangladesh have been looking for and it's none other than Taijul Islam as he traps Abid Ali in front for 133. Pakistan 218/6

Ebadot Hossain gets his first in the match, traps Mohammad Rizwan LBW for 5. Pakistan 207/5

It's lunch on Day 3 and Bangladesh have done everything right today. 31 overs were bowled in the morning session with 58 runs coming from Pakistan losing 4 wickets in the process. The only good thing that happened for Pakistan so far is Abid Ali's 4th Test ton.

Taijul Islam is in action again. He picks up his third wicket in the match, dismisses Fawad Alam for 8, caught by Liton Das.  Bangladesh on top at the moment. Pakistan 182/4

Another one bites the dust and this time it's captain Babar Azam. Mehidy Hasan bowls straight, Babar goes back, tries to edge it past slip, but the ball crashes onto the stumps. Babar goes for 10. Pakistan 169/3

Century No.4 for Abid Ali in Tests. He flicks Taijul Islam for a double past square-leg and then removes his helmet to soak in the appreciation.  Pakistan 157/2

Abid Ali is playing the cautious game here in Chattogram. The opener, starting on an overnight score of 95, has played 28 balls today for just three runs after Pakistan lost two wickets in the first over of the day. Pakistan 155/2

Bangladesh couldn't have asked for a better start to the day. Debutant Abdullah Shafique (52) and Azhar Ali are out in the first over, both LBW by Taijul Islam. Pakistan 146/2. Babar Azam comes in the middle

Day 2 on Saturday clearly belonged to Pakistan. Bangladesh batsmen ran out of gas after starting the day at 253 for four. Veteran batsman and former captain Mushfiqur Rahim, who started at 82, could not complete his century as Bangladesh suffered a middle-order collapse.

Mushfiqur (91) and Liton Das (who added just one run to his overnight 113) could not carry their partnership forward as Pakistan bowlers tested the Bangladesh batsmen by bowling in good areas. Bangladesh lost three wickets for 23 runs and only a defiant knock of 38 not out took the home team past the 300-mark.

Bangladesh’s hope of racking up a substantial total was dashed by fast bowler Hasan Ali, who took 5 for 51. Ali’s sixth five-for was well-complemented by his new-ball partner Shaheen Shah Afridi who returned figures of 2 for 70 and medium-pacer Faheem Ashraf, 2 for 54.

Pakistan openers Abid Ali and Abdullah Shafique, who were undefeated at stumps On Saturday, will have to be careful on Sunday morning. Ten wickets have fallen in morning sessions and if that period can be won, Pakistan, who trail by 185, can be in an advantageous position. Abid Ali is seven runs away from his fourth century.