After losing four wickets for 49 runs in 17 overs, Bangladesh reached 253/4 (85) at the close of play on Day 1 of the first Test against Pakistan in Chattogram. Catch highlights and cricket scores of the BAN vs PAK cricket match. 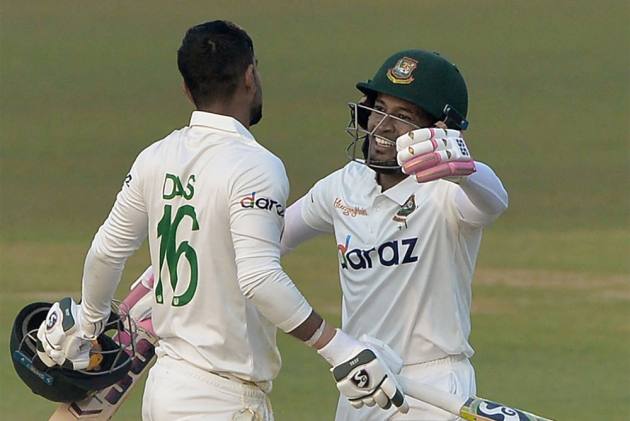 Former captain Mushfiqur Rahim and his wicket-keeping understudy, Liton Das stitched an unbeaten double-century stand to help Bangladesh fight back against Pakistan on Day 1 of the first Test at Zahur Ahmed Chowdhury Stadium, Chattogram Friday. Mominul Haque won the toss and opted to bat first, but Bangladesh lost the top four for just 49 runs inside the 17th over. Then Rahim and Das added 204 runs for the fifth wicket in 413 balls before bad light stopped play with five overs remaining in the day's play.

In the process, 27-year-old Das (113 off 225) completed his maiden Test ton. His previous best was 95 in the last match against Zimbabwe in Harare in July. Das already has over 1300 runs in 26 matches. Veteran Rahim, batting for the 139th time in 76 matches, was 18 runs away from his 8th century. For Pakistan, pacers Shaheen Afridi, Hasan Ali, Faheem Ashraf and offspinner Sajid Khan shared the four wickets. But the much-vaunted bowling attacked withered as the day progressed.

Bangladesh, who lost the preceding three-match T20Is 0-3, fielded a depleted side with star all-rounder Shakib Al Hasan and senior batter Tamim Iqbal missing due to injuries. Limited-overs captain Mahmudullah, who hit a 150 not out in Bangladesh's last Test against Zimbabwe, retired from Test cricket. Pakistan handed a Test debut to Abdullah Shafique, who scored two centuries in three First class matches.

Shaheen Afridi on with his 18th over. A single off the first ball as Mushfiqur Rahim negotiates the bouncer. And 200-run stand with Liton Das. Five from the over and 25 from the last ten. BAN - 253/4 (85).

Double century for Bangladesh. What a fightback it has been by the Liton Das and Mushfiqur Rahim. The duo has played a combined 309 balls bringing up their fifties in the process. Bangladesh 200/4, a partnership of 152 runs for the fifth wicket.

What a terrific session for the hosts. After being reduced to 49/4, Liton Das and Mushfiqur Rahim struck individual fifties to help Bangladesh 179/4

After Liton Das, Mushfiqur Rahim too notched up his half-century. Bangladesh 168/4

50 for Liton Das. What a fine knock he has played after Bangladesh were four down for 49. Bangladesh 144/4

Liton Das (45*) and Mushfiqur Rahim (40*) are doing the same what Joshua Da Silva and Nkrumah Bonner did for West Indies against Sri Lanka yesterday. Bangladesh 138/4

100 up for Bangladesh. Mushfiqur Rahim (20*) and Liton Das (30*) are currently battling out in the middle against Pakistan. Bangladesh 102/4

Mushfiqur Rahim and Liton Das have so far negated the Pakistan bowling attack. The duo has played a combined 108 balls for 38 runs. Bangladesh 90/4

11:30 AM IST: Ample opportunity for Liton

After an underwhelming performance in the T20 World Cup 2021, chance for Liton Das to stake a claim in the Test side and be in the reckoning. The right-hander has played 29 balls for his 10 not out. Bangladesh 69/4. Lunch has been taken.

Pakistan have brought Nauman Ali into the attack. He became the fourth oldest Test debutant for Pakistan when he played against South Africa in January this year.  Nauman also took a fifer on debut.

Bangladesh should learn from West Indies duo Joshua Da Silva and Nkrumah Bonner who played a combined 269 balls for a 100-run 7th wicket stand after being reduced to 18/6 against Sri Lanka. Hope Bangladesh players saw the Test match yesterday.

10:56 AM IST: Bangladesh in deep trouble

Bangladesh look to have not learnt from the mistakes in the T20 series. After Mominul Haque,  Najmul Hossain Shanto's brief resistance at the crease comes to an end, caught by  Sajid Khan, off Faheem Ashraf. Shanto goes for 14. Bangladesh 56/4

Bangladesh are in serious trouble here in  Chattogram. After the openers, Bangladesh have lost skipper Mominul Haque, caught behind by Mohammad Rizwan, off Sajid Khan. Mominul departs for 6. Bangladesh 47/3. Mushfiqur Rahim comes in the middle.

Excellent first hour of play by Pakistan. Hasan Ali and Shaheen Shah Afridi have been brilliant with the ball so far in the morning creating chances of dismissing both the openers cheaply. Drinks are on the field now. Bangladesh 43/2

Not the start Bangladesh wanted. The hosts lost both the openers Saif Hassan and Sadman Islam for identical scores of 14. Najmul Hossain Shanto and captain Mominul Haque are the two new batsmen at the crease. For Pakistan, Shaheen Shah Afridi and Hasan Ali took wickets. Bangladesh 34/2

The outfield looks beautiful and the weather is perfect for the players too.  The pitch looks great for batting and there will be a lot of runs, says Ed Rainsford.

Meanwhile, former Australia Test captain Tim Paine has decided to step away from all forms of cricket for the time being.

Bangladesh have won the toss and they will bat first.

No Shakib Al Hasan, no Tamm Iqbal, no Taskin Ahmed and no Mahmudullah, Bangladesh are looking up to their next-generation cricketers in this Test series against Pakistan. Injuries and retirements are part of a journey and Bangladesh are facing both as they play their first match in the new ICC World Test Championship cycle. Captain Mominul Haque said the young players in the team are motivated enough to fill the seniors’ shoes. “We have to play with whatever resources we have,” Mominul said. “There’s no point of thinking who is in the team and who is not. These seniors had a lot of contributions for Bangladesh cricket. But life goes on.” Bangladesh’s Test record this year also is unconvincing. It lost two home Tests against the West Indies from favorable positions. A two-Test series in Sri Lanka was lost 1-0, then it beat Zimbabwe by 220 runs. Babar Azam-led Pakistan, fresh from a 3-0 win in the T20 series against Bangladesh, have the resources, experience and momentum going into the Test series versus Bangladesh. Pakistan won series against South Africa and Zimbabwe at home before drawing with the West Indies, which was their first series in the new WTC cycle