Catch Day 5 highlights and cricket scores of the first Test between Bangladesh vs Pakistan in Chattogram. A dominant Pakistan beat Bangladesh by eight wickets to take 1-0 lead. 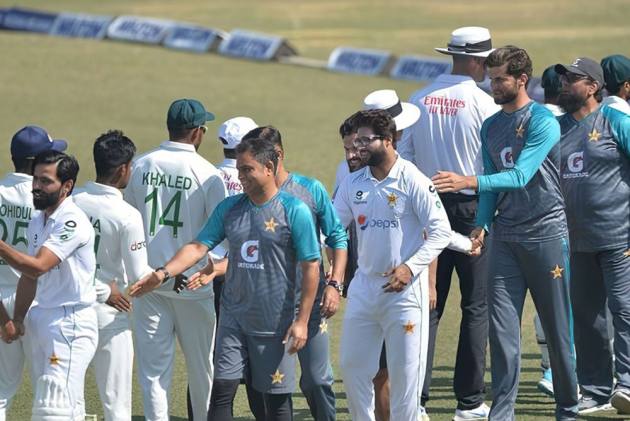 Pakistan completed an emphatic 8-wicket win in the first Test against Bangladesh in Chattogram on Tuesday. Chasing a target of 202 runs, Pakistan resumed the final day of the match on 109 for no loss. The visitors lost both the openers, Abdullah Shafique (73) and Abid Ali (91), then Azhar Ali and Babar Azam added 32 runs for the third wicket to seal the win. The win helped Pakistan leapfrog India to the second spot in the ICC World Test Championship points table with 66.00 PCT (%). Check the latest standings HERE.  Catch Day 5 highlights and scores of BAN vs PAK first Test.

Despite the defeat, Bangladesh will take heart from the fact that a depleted side managed to dominate the visitors for the most part of the match. Liton Das and Mushfiqur Rahim, as always, were brilliant. Taijul Islam also got his share of the limelight with a seven-wicket haul. In fact, they lost the game on Day 4 after managing just 157 in the second innings. And triggering the collapse was Shaheen Afridi. For the visitors, the new opening pair of Abid Ali and Abdullah Shafique were the stand-out batters, stitching hundred-run stands in both innings. Abid Ali is the player of the match for his 133 and 91. The second and final match is scheduled to be played in Dhaka, starting December 4.

Pakistan skipper Babar Azam is all praise for his openers. "I am happy the way he (Abid Ali) built his innings and he will only keep improving, also the way Abdullah played, they will make a good opening pair."

Bangladesh captain claims that their strong suit is batting, and blamed "the first one hour in the first innings and second innings as well."

Abid Ali hails his new opening partner, Abdullah Shafique. "He played really well, I was praying for him and hopefully he keeps batting like this. And I am happy that Pakistan won the game."

Pakistan openers are in a hurry. Abid Ali hits Taijul Islam for three back-to-back fours to end the 39th over. In the previous over, Abdullah Shafique gets his first with Ebadot Hossain overpitching the third ball. Pakistan need 70 runs. PAK - 132/0 (39)

Meanwhile, here's all you need to know about Indian Premier League retention. The deadline to retain players is Tuesday.

One Day 4, Shaheen Afridi toyed with Bangladesh and the hosts were all out for 157 in 56.2 overs. The penultimate day's play ended with Pakistan openers Abid Ali and Abdullah Shafique unbeaten on 56 and 53 runs respectively.

Pakistan are clearly riding some solid batting by their openers. Abid Ali and Abdullah Shafique posted their second century-stand on Monday to put Pakistan in a commanding position in the Chattogram Test.

This is only the second time when a pair of Pakistani openers have stitched century stands in both innings of a Test match. Taufeeq Umar and Imran Farhat did so against South Africa in October 2003 in Lahore. Pakistan won that match by eight wickets.

With 93 required with three full sessions remaining, Pakistan will have all the time in the world to cruise to a comfortable win. Bangladesh will need a miracle to win the first Test against Pakistan. The visitors deserve to win the Test especially after Shaheen Shah Afridi's marvellous bowling feat on Monday.

Afridi’s fourth five-wicket haul (5 for 32) in Tests wrapped up Bangladesh’s second innings for 157 on Day 4, setting Pakistan a 202-run target to win.

After Afridi, it was a Abid Ali-Abdullah Shafique show. Ali, who scored 133 in the first innings, was on 56 and debutant Shafique was unbeaten on 53 when bad light ended play early for the fourth consecutive day.

A win will ensure 12 points ICC ICC World Test Championship points for Pakistan. They already have 12 points (50%).  Bangladesh are yet to open their account for the 2021-12 WTC cycle.