Day 2 of the second Pakistan vs Bangladesh Test on Sunday was hit by rain once again. Pakistan started the day at 161 for 2 and when stumps were drawn early, the visitors were 188/2. Get here highlights of BAN vs PAK Test in Dhaka. 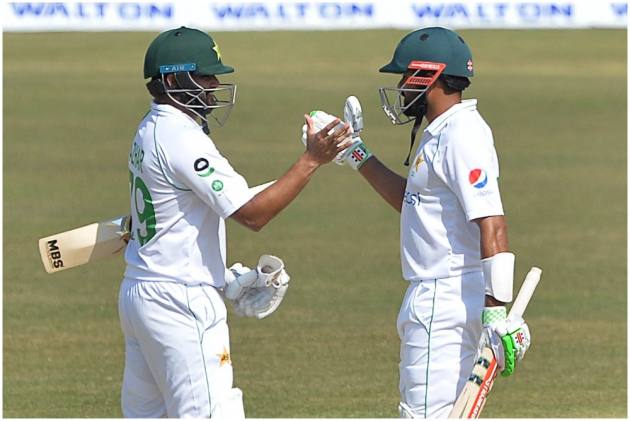 Unseasonal rains continued to pour water on Bangladesh's hopes to square the Test series against Pakistan. More than a session was lost on the opening day of second Bangladesh vs Pakistan Test in Dhaka on Saturday and it was no different on Sunday. Pakistan, 1-0 up after their eight-wicket win in Chattogram, did well to end the day at 161 for two wickets. The visitors were 188 for 2 when play was called off on Day 2. Pakistan have never lost a Test match against Bangladesh. Here are the Day 2 (Sunday) highlights of BAN vs PAK.

14:53 PM IST: Play has been called off due to rain and bad light. This has been a disappointing two days of the second and final BAN vs PAK Test. Pakistan are 188 for 2 at close. Babar Azam is on 71 and Azhar Ali on 52.

Rain is back again in Dhaka. Earlier, only 6.2 overs were possible for play. In the meantime, Azhar Ali completed his fifty. He is batting on 52 while captain Babar Azam is unbeaten on 71.

66 overs to be bowled. A twenty-minute session from 12.50 to 1.10pm, after which they will take tea. And then the final session of play will be four hours long, starting at 1.30pm local.

Rains playing hide and seek. A few minutes ago there was a slight drizzle and now the rains have disappeared. The umpires are going out to inspect. The weather looks really gloomy.

Lunch has been taken in Mirpur, Dhaka. Gives umpires some extra time.

Rains continue in Dhaka. Inspection has been cancelled and the covers are on. Bad news for Bangladesh looking for World Test Championship points

The umpires will be inspecting the pitch soon as the majority of the covers have gone out. The rain has stopped.

Good news is that the light has improved and the covers have started to come out.

Hello everyone. The scenes aren't great in Dhaka as there is a light drizzle and the covers are in place. It's going to be a delayed start to Day 2.

It was not surprising to see Bangladesh introduce their two left-arm spinners early in the first session. Shakib Al Hasan, who returned to the BAN side after an injury break, and Taijul Islam had an almost immediate impact. Taijul Islam (2 for 49) was more effective as he sent back both the Pakistani openers before lunch.

The second session saw some fine contest between bat and ball. Babar Azam and Azhar Ali survived several tricky moments at the outset of their innings, particularly against Taijul.
When bad light finally ended play, Babar Azam was batting on 60 and former Test captain Azhar Ali was on 36. The duo has already produced 91 runs for the third wicket.

Bangladesh could have swung the momentum had Khaled Ahmed not put down a tough chance, offered by Babar on 39 off left-arm spinner Shakib Al Hasan’s bowling.
Babar Azam then guided a length delivery of off-spinner Mehidy Hasan for a couple to reach his 19th Test 50 off 75 balls.