Pakistan have never lost a Test match against Bangladesh. Catch Day 1 highlights and scores of BAN vs PAK, second Test in Dhaka. Pakistan won the first Test at Chattogram. 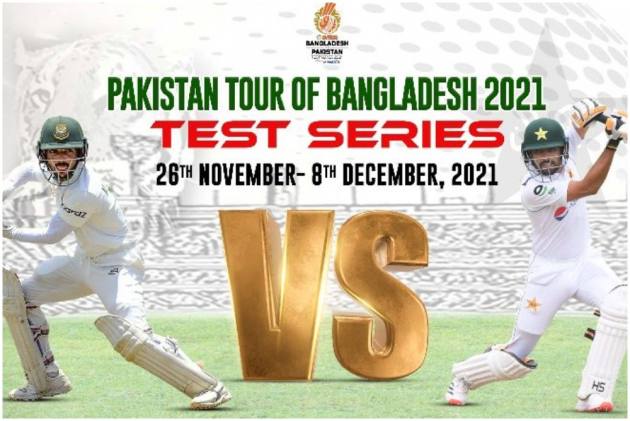 Pakistan and Bangladesh shared honours on Day 1 of the second Test in Dhaka with bad light forcing early stumps. Pakistan, chasing a 2-0 clean sweep, won the toss and opted to bat first. Abid Ali and Abdullah Shafique stitched an opening stand of 59 runs before becoming Taijul Islam's victims. At the close of play on Saturday, skipper Babar Azam (60) and Azhar Ali (36) were unbeaten. Pakistan were 161/2 in 57 overs. Catch Day 1 highlights of the second BAN vs PAK Test match:

Bad light stops play in Dhaka. The floodlights have been out on. The umpires are taking the light reading. Looks like there is going to be a deay.

Pakistan have full control here in Dhaka at Tea.  The duo of Azhar Ali and Babar Azam has played the spinners well. Pakistan  161/2

Play has resumed and Pakistan are going on a steady note. Babar Azam (54) and Azhar Ali (29) are currently in the middle. Pakistan 146/3

Rain halts play in Dhaka. After a brief drizzle, the rain has stopped. Covers are being removed. Play to resumes shortly.

It's been a mixed bag in this session. While Pakistan openers enjoyed the first hour beautifully, Taijul Islam brought Bangladesh back removing both Abdullah Shafique and Abid Ali. Pakistan 78/2

Bangladesh have got the first breakthrough in the session. Abdullah Shafique, clean bowled by Taijul Islam. Pakistan 59/1

Both the openers have got starts for Pakistan. It is now up to Abid Ali (34*) and Abdullah Shafique (23*) to capitalise on the starts and score big. Pakistan 57/0

The Pakistan openers have so far paced their innings beautifully. Bangladesh need to break this partnership. Pakistan 54/0

The pair of Abdullah Shafique and Abid Ali has been the backbone of this Pakistan batting line-up. They registered century partnerships in both the innings of the first Test in Chattogram and will aim to do so here also. Slow and steady. Pakistan 9/0

A beautiful boundary by Abid Ali in the first over from Ebadot Hossain to start the proceedings. Pakistan 4/0

The pitch looks nice and pretty rolled out. Due to overcast conditions, there is a bit of moisture in the wicket. Rains expected on Day 3 and 4," says Athar Ali Khan.

Pakistan have won the toss and they will bat first.

Shakib Al Hasan and Taskin Ahmed's return to the Bangladesh national cricket team has been the perfect boost for the hosts but if the Tigers want a favourable result against a red-hot Pakistan tea, they have to play a solid team game.

Bangladesh lost the first Test in Chattogram by eight wickets primarily because of inconsistency. There were some superb performances both with bat (Liton Das' 114 and Mushfiqur Rahim's 91) and ball (Taijul Islam's 7/116) but they were like stray incidents that finally did not hurt the Pakistan team.

Having a Shakib Al Hasan gives a team a lot of confidence and belief but in a Test match, it is suicidal to bank on one or two players. More importantly, skipper Mominul Haque (6, 0) will have to bat well and hold the top and middle order together.

Bangladesh’s top order faltered in both innings of the first Test, being reduced to 49 for 4 and 39 for 4, which also played a key role in the loss. Shakib Al Hasan will have his task cut out in that position.

“For me, as a captain, everything gets easier when Shakib is around,” Bangladesh skipper Mominul Haque said.

“Everything is fine with him at this moment. You know he is a player with two in one. He (Shakib) is such a player who can give us the combination we are comfortable with. We now can return to our traditional combination of four bowlers and seven batsmen.”