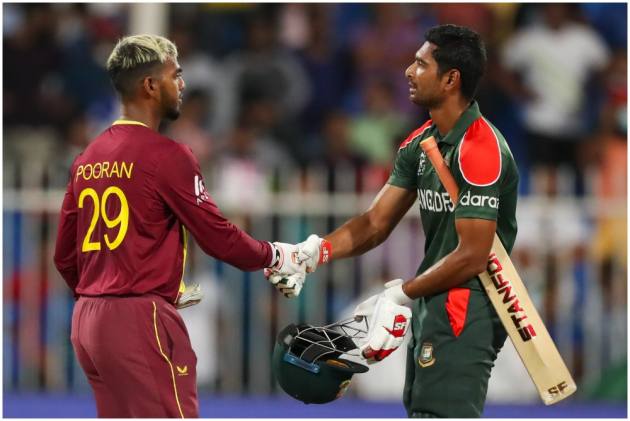 Defending champions West Indies defeated Bangladesh in the must-win game to keep their hope alive to qualify for the ICC Men's T20 World Cup semi-finals at Sharjah Cricket Stadium on Friday. The Caribbean side struggled with the bat on the sluggish surface after disciplined Bangladesh bowlers bowled according to the conditions. The tables turned when Nicholas Pooran came in to bat at No.7. The wicketkeeper-batter smashed Bangladesh bowlers, scoring 40 off 22 balls which included four sixes. Jason Holder, too, hammered two sixes to help West Indies post 142 for 7. Bangladesh openers Shakib Al Hasan and Mohammad Naim’s stay at the crease was cut short before Liton Das brought the run rate to almost run-a-ball. However, the experienced Dwayne Bravo dismissed Das on the last ball of the penultimate over. With 13 runs needed off 6 balls, Andre Russell restricted Bangladesh to 139/5, virtually ending Bangladesh’s survival in the tournament.

19:40 PM IST: Nicholas Pooran is the Player of the Match

Pooran, whose cameo dragged West Indies to a moderate total, is adjudged Player of the Match. Talking about coming down the order, he says it was a "tactical move". He goes on, "We talk about batsmen taking responsibility and doing what's needed for the team. The batting hasn't clicked yet and we needed to put our hands up. I felt as a cricketer and a batsman I needed to put my hand up. We were missing Polly too. I have been working very very hard for the last couple of months, things just hadn't gone my way. I hadn't been doing myself justice, giving away my wicket. I'm always confident and positive about my attitude and skills."

Meanwhile, the other match of the night is between Pakistan and Afghanistan. Read the live blog and follow the preview.

Just when it seemed the game was in Bangladesh's control, Dwayne Bravo tilted the match in his team's favour. Bravo removed Liton Das for 44 as the set batter was caught by Jason Holder at long-on. Bangladesh needed 13 off 6 balls but Andre Russell restricted the opposition team on the last ball. Bangladesh 142/7 (20)

Bangladesh need 33 runs off 24 balls. The experience of Liton Das has come in handy for Bangladesh on their do-or-die day. He is keeping the scoreboard ticking, with regular boundaries. West Indies under pressure again. Bangladesh 110/4 (16)

West Indies pulls another one back. Ravi Rampaul shatters the stumps of Mushfiqur Rahim. But Litan Das is keeping the scoreboard ticking. Bangladesh need 50 off 36 balls. Bangladesh 93/4 (14)

Akeal Hosein joins the party and takes the wicket of Soumya Sarkar. The brilliance of Chris Gayle sends the third Bangladesh batter back to the dugout as he takes a diving catch at short third. Is Bangladesh in trouble? Bangladesh 60/3 (10.4)

After losing both the openers, Bangladesh's Soumya Sarkar and Liton Das keep the chase on track, by stealing singles and doubles. Bangladesh 55/2 (10)

Both the openers of Bangladesh fall inside powerplay. Holder gets the set batter, Mohammad Naim. Naim tries to drive the ball to point but ends up getting an inside edge onto the stumps. Big celebration for West Indies. Bangladesh 29/2 (6)

Shakib Al Hasan tries to swing the ball down the ground but gets a leading edge and Jason Holder catches the ball at mid-off. Early breakthrough for West Indies. Bangladesh 26/1 (5)

Mohammad Naim and Shakib Al Hasan are in the middle. Ravi Rampaul with the new ball. Brilliant start for West Indies as Rampaul concedes only four runs. Bangladesh 4/0 (1)

Nicholas Pooran says that it is not a 170-run track, adding it is tough to hit cross-batted shots to back-of-length balls. Talking about his sixes he says, "That's just my talent!" He heaped praises on Bangladesh bowlers and said they bowled really well, adding, "We could have taken the straighter option, used our feet a bit more to the spinners, maybe to the pacers too. This 142 is like 160. I'm very happy with the total from where we were."

Pooran and Jason Holder, who came in as a replacement player, ignited the West innings on a sluggish pitch. Pooran came in at a time when West Indies were struggling to even reach the 100-run-mark. But his four maximums before Holder 15 off five balls have given West Indies bowlers something to defend. West Indies 142/7 (20)

Pooran swings the ball for a maximum off Shakib Al Hasan. This is the first six of the West Indies innings. Pooran goes big again. The much-needed runs are coming way too late in the innings. West Indies 99/4 (16)

West Indies skipper Pollard walks off the ground. Looks like he is retiring hurt. Russell is the new man in. But Russell departs without facing a ball. He is run out at the non-striker's end. Chase tried to drive the ball back but bowler Taskin got his right boot to it. West Indies 64/5 (13)

Pollard and Chase continue to struggle on a sluggish pitch. The ball is not coming on to bat as Bangladesh are bowling well according to the conditions.

Bangladesh go for an lbw review. Pollard survives as the impact was outside the line. West Indies 61/3 (13)

Bangladesh bowlers are just brilliant with their line and length, keeping things tight for West Indies. Two new batters - skipper Kieron Pollard and Roston Chase - are in the middle struggling to drive the ball down the ground, thanks to Taskin Ahmed, Shoriful Islam, and Shakib Al Hasan. West Indies 48/3 (10)

West Indies batting is not looking good yet again. Bangladesh gave early dents to the defending champions, removing both the openers Chris Gayle and Evin Lewis. West Indies promoted Shimron Hetmyer to No.4 but he departs soon after the power play.

Hasan dropped Hetmyer on a return catch but dismissed him on the next ball.  Hetmyer tried to go down the ground but Soumya Sarkar caught him in the deep. West Indies 32/3 (6.4)

Bangladesh misses a golden opportunity to run-out Gayle. Had there been a direct hit at the keeper's end, Gayle would have returned to the dugout. Mustafizur, however, pulls one back as he dismisses Lewis for 6. West Indies 12/1 (3)

Chris Gayle and Evin Lewis are at the crease. Mahedi Hasan starts with a wide ball against power-hitter Gayle. Only four runs in the first over. Decent start for Bangladesh. West Indies 4/0 (1)

West Indies will be itching to fire. And now that power-hitter Chris Gayle will be opening, the team will be expecting a change of fortune. While Bangladesh This is the third successive game West Indies are batting first in this tournament.

For Bangladesh, this is their second game at Sharjah this tournament. The last time when they batted their 171 score was not sufficient against Sri Lanka. Further, batting again first against England didn't help. They would be hoping bowling first this time help them.

West Indies skipper Kieron Pollard admits it is a do-or-die match. He confirms Chris Gayle is going to open the batting. Roston Chase makes his international debut and replaces Simmons. While Jason Holder comes in place of Hayden Walsh.

Bangladesh captain Mahmudullah says that his team needs to restrict West Indies to a decent total and try to chase it down. Two changes for Bangladesh. Soumya Sarkar comes in for Nurul and Taskin Ahmed replaces Nasum.

Bangladesh have won the toss and chose to bowl.

The defending champions West Indies enjoy a 6-5 head-to-head record against an inconsistent Bangladesh.

Hello and welcome to another T20 World Cup 2021 live coverage, this time it is a must-win game between the defending champions West Indies and Bangladesh at Sharjah on Friday.