A record 140-run opening stand between KL Rahul and Rohit Sharma put India on path to a 66-run win vs Afghanistan. Highlights of IND vs AFG here. 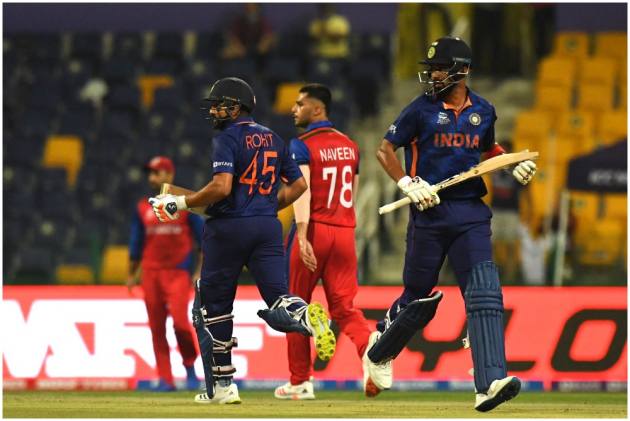 On Choti Diwali on Wednesday, entire India will be praying that Virat Kohli and his team play true to their reputation in a crucial T20 World Cup Group 2 match against Afghanistan in Abu Dhabi. With Pakistan already in the semifinals from this group, India, New Zealand and Afghanistan all have a chance to make the last four and each one of them will be gunning for two full points and nothing less. In this format of the game, no team is a favourite and when a playing XI has three world-class spinners, they can never be ignored. Indian batsmen will brace for some spin test against Afghanistan's troika of Rashid Khan, Mujeeb Ur Rahman and captain Mohammad Nabi. Batsmen like KL Rahul, who don't have a great record against Rashid Khan, will have to dig deep into their IPL knowledge to score their runs against the Afghans, who have four points from three matches and a very healthy nett run rate of 3.097. It is thus imperative that India, who have lost to Pakistan and New Zealand by big margins, must not only win but emerge victorious by a handsome margin so as to take care of their -1.609 run rate. The experiment to open with Ishan Kishan is likely to end with Rohit Sharma expected to go back to his usual position. But it's not about position, dew or other external factors that will matter tonight. India need to show their hunger and shun indiscretion against a dangerous opponent. India have never lost a T20 international against Afghanistan but that's history. Indians simply need to fire so that cricket fans can enjoy Diwali on Thursday. Follow here live cricket scores and live updates of IND vs AFG.

Rohit Sharma (Player of the Match): It was a good pitch to bat on and the idea was pretty simple to go after. Rahul was brilliant with the bat too. The NRR was in the back of our mind so we had to win big.

By the virtue of this win, India have entered positive territory in the net run rate and climbed up in the fourth spot with +0.073. Pakistan, with four wins, remain on top qualified. Both Afghanistan and New Zealand have four points each but the former sit in second with a better run rate. India have two games left against Scotland and Namibia.  (Report)

It's all over here in Abu Dhabi. Karim Janat hits a six off the final ball bowled by Hardik Pandya, but India take the match by 66 runs.

Two wickets for Shami. Shami bowls a slower and Mohammad Nabi goes for the big hit, only to be caught by Ravindra Jadeja for  35. He dismisses Rashid Khan for a first-ball duck, thanks to a running catch from Hardik Pandya.  Afghanistan 127/7 (18.4)

What a brilliant first over from Shardul Thakur. Just five runs from it. Afghanistan 66/4 (11)

Fourth one goes down for Afghanistan. And it's comeback man Ravi Ashwin in the middle. He traps Gulabdin Naib in front. Afghanistan in trouble, 59/4 (9.4)

Deployed spin for the first time in the innings, Ravindra Jadeja picks up dangerous Rahmanullah Gurbaz for 19, thanks to a brilliant catch by Hardik on the boundary. Afghanistan 49/3 (7). Najibullah Zadran is the new batsman in the middle.

Young Rahmanullah Gurbaz dispatches Mohammed Shami for 6, 6 and 4 in the final three balls of the over to take 21 from it. Afghanistan 38/2 (5)

Jasprit Bumrah joins the party. Hazratullah Zazai gets a top edge, only to be caught by Shardul Thakur. Two down for Afghans. Zazai goes for unlucky 13. Afghanistan 13/2 (3.1)

And Mohammed Shami gives India first breakthrough. Shami bowls a slower, Mohammad Shahzad, gets a leading edge only for Ravi Ashwin to take a simple catch at mid-off. Shahzad goes for 0. Afghanistan 13/1 (3).

India, whose net run rate is -0.161, need to restrict Afghanistan to 99 or less to go above Afghanistan and New Zealand in terms of NRR.

So far Diwali has been bright for Indian fans back home. First, former India captain Rahul Dravid was appointed as the new head coach and secondly, the Men in Blue returning to their mojo with a sensational 210/2 against Afghanistan.

KL Rahul goes across the line in an attempt to scoop towards fine leg boundary and clean bowled. Gulbadin Naib with a perfect delivery. Rahul goes for 69. India 148/2 (16.4)

Meanwhile, the biggest news of the day has come in. Rahul Dravid has been named as the head coach of the Indian men's senior national team.

First success for Afghanistan today. Rohit Sharma hits straight into the hands of Mohammad Nabi, off Karim Janat. he goes for 74. Rishabh Pant walks in at No.3. India 142/1 (15)

Another good over by the Indian openers. A four to start and a four to end off the bowling of Gulbadin Naib. India 119/0 (13)

Fifty for Rohit Sharma with a four, his 23rd in the format. Naveen-Ul-Haq bowls slower outside the off-stump and Rohit cuts it away. KL Rahul is also not too far behind as he brings his with a six. 100 up for India. India 107/0 (12)

One thing that impressed the most today was KL Rahul and Rohit Sharma rotating the strike consistently unlike the previous two matches where they were in a hurry to score boundaries. Both the openers have got the gaps quite brilliantly. Had India approached the previous games like today, the scenario could have been different. India  85/0 (10)

Not the best to finish the powerplay, just one run off the sixth over. But India will take the fact that they have best start in this T20 World Cup. India 53/0 (6)

Rohit Sharma is in his element today.  Goes behind the ball and bangs for a six off Naveen-ul-haq.  Two more fours from him in the over too. India bring up fifty in style. India 52/0 (%)

This is the first time Ravichandran Ashwin is playing a white-ball match for India after 2017.

This is a kind of start India were missing in the last two matches. After a steady first over, India get two fours and a six, including the biggie for KL Rahul in the second over bowled by Sharafuddin Ashraf.  India 23/0 (2)

For the record, Virat Kohli has lost three consecutive tosses in as many matches.  With Suryakumar back in the side, he will bat at his designated No.3 spot which means Rohit Sharma will once again open with KL Rahul. Ashwin's inclusion means the team management opted for experience in this crunch match.

India have a couple of changes in the playing XI. Ravi Ashwin comes in in place of Varun Chakravarthy and Suryakumar Yadav is back in place of Ishan Kishan.

Afghanistan have won the toss and they will bowl first.

The pitch in Abu Dhabi has assisted spinners so far in this tournament and Wednesday will be no change. Afghanistan, who are heavily loaded with spinners like Rashid Khan, Mujeeb Ur Rahman would like to exploit the conditions. On the other hand, it would be interesting to see whether Ravi Ashwin replaces an unfit Hardik Pandya and how Varun Chakravarthy displays his skills. Ravindra Jadeja will also play a part.

ICYMI, New Zealand's Martin Guptill missed on a well-deserved century after he was dismissed for 93 runs against Scotland. Had he scored those seven runs, Guptill would have scored this tournament's second ton after Jos Buttler's 101 not out against Sri Lanka.

As things stand currently, Pakistan have already made it to the semis. Afghanistan with two wins are in the second spot while New Zealand, who are playing Scotland now, are third. A win against Scotland will make New Zealand equal with Afghans with four points.  If Afghanistan manage to beat India, they go one step further for their first semifinal spot in any ICC tournament.

Hello and welcome to another Outlook India coverage in the ongoing T20 World Cup, this time it's India playing against Afghanistan. Mind you, if Afghanistan win today, it's curtains for India.