India started their T20 World Cup journey with a fluent seven-wicket win in a warm-up match against England after Mohammed Shami starred with the ball. 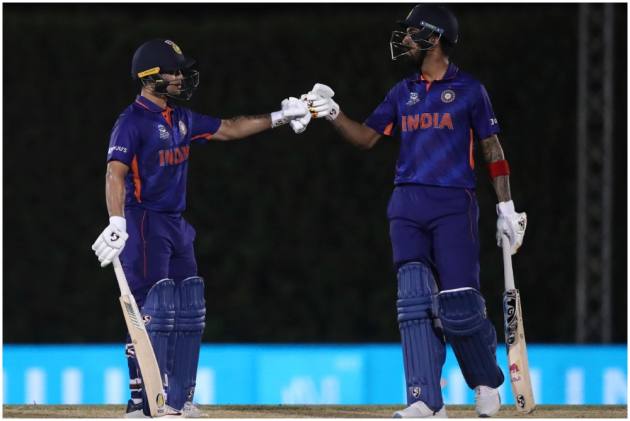 Fresh from the Indian Premier League (IPL) 2021, Indian players will be at 'home' in Dubai on Monday night when they play England in a T20 World Cup 2021 warm-up match. India and England are in different groups in the ICC men's T20 World Cup in the UAE and Oman but have a great chance to clash in the knockout rounds. Rival captains Virat Kohli and Eoin Morgan will like to utilise the practice game to score some much-needed runs. Morgan was in horror for in IPL 2021 and his repeated failures cost Kolkata Knight Riders the trophy against Chennai Super Kings in the IPL final in Dubai on October 15. Kohli was relatively better but not his usual self. India and England clashed in a T20 series in March this year. India won the series 3-2 at home. While the entire Indian team is ready for the T20 World Cup after the UAE leg of the IPL, England players were involved in 'The Hundred' earlier in the season. England's top players like Jonny Bairstow and Jos Buttler, who gave Part 2 of IPL 2021 a skip, will be fresh for the World Cup. But all eyes will be on the in-form Moeen Ali, who played a crucial role in CSK's title win in IPL 2021. Follow live cricket scores of India vs England warm-up match here.

Three fours from Hardik Pandya in the 19th over wins it for India against England today. Chris Jordan misses the trick completely, bowls two no-balls along with the dew factor that came into play.  Rishabh Pant finishes with a huge six. India win by seven wickets.

Suryakumar Yadav's poor form with the bat continues. He goes for 8, caught by Jos Buttler off David Willey. India 169/3 after 18 overs, need 20 off 12 balls.

Ishan Kishan walks off the field despite being dropped by Liam Livingstone for a well-made 70. Kishan had a very good practice and makes way for Suryakumar Yadav. SKY joins Rishabh Pant (17) in the middle. India 154/2 after 16 overs.

The brief chat with Virat Kohli during theIPL 2021 is reaping fruits for Ishan Kishan as the India opener is back in form with an unbeaten 61. After finishing the IPL 2021 with two good scores, Kishan brings up his fifty in India colours. India 126/2 after 13 overs. Virat Kohli is the last man out for 11.

Rahul departs, but not before registering his fifty with a four off Mark Wood.  The Indian opener slices it straight towards cover at the hands of Moeen Ali for 51. India 85/1 after 9 overs.

KL Rahul and Ishan Kishan have given India a rocking start as the Men in Blue raced to 78 runs without loss in eight overs. While Rahul is batting at 47, Kishan is playing second fiddle with 30 not out. India still need 111 runs in 12 overs.

Two sixes and a four in the last over by Moeen Ali helps England to 188/5 after 20 overs. Earlier Jonny Bairstow fell just a run short of his fifty. For India, Shami took three wickets while Jasprit Bumrah and Rahul Chahar picked one each.

Mohammed Shami is having his day. Wicket No.3 for the Indian pacer as he dismisses Liam Livingstone for 30. England 137/4 after 16 overs. Jonny Bairstow (44*) and Mooen Ali (2*) are in the middle.

Indian bowlers are finding it clueless against Liam Livingstone as the left-hander is smashing them all over the park. Already four fours and a six in his 18-ball 29. Jonny Bairstow (31*). England 118/3 after 14 overs.

Chahar joins the party. Dawid Malan fails to judge the googly and gets clean bowled for 18. England 77/3 after 10 overs.  Jonny Bairstow (21*) and Liam Livingstone (1*).

Mohammed Shami adds another to his tally today as Jason Roy gives a simple catch to Jasprit Bumrah at short fine leg for 17.  England 51/2 after 6 overs.

England opening duo Jos Buttler (18) and Jason Roy (16*) were dealing in boundaries before the former was undone by a Mohammed Shami slower delivery. England lose their first. Dawid Malan joins Roy in the middle. England 37/1 after 4 overs.

India have won the toss and will bowl first.