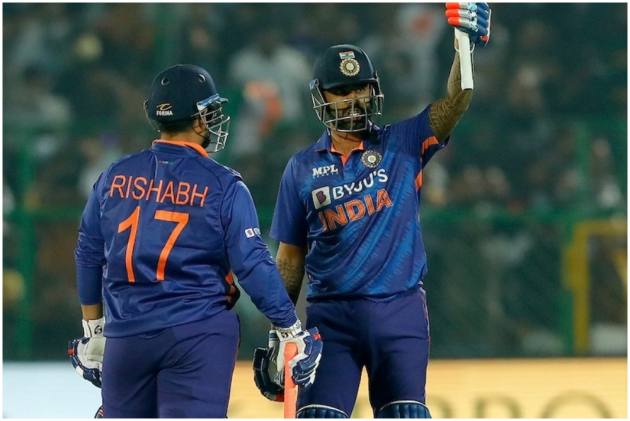 Less than 72 hours after suffering a defeat in the final of the T20 World Cup in Dubai against Australia, New Zealand lost another, this time a five-wicket defeat at the hands of India in the T20 series opener in Jaipur.  Such is the modern cricket calendar which is relentless and challenging to both mind and body.

Batting first at the Sawai Mansingh Stadium, New Zealand had a disastrous start losing Daryl Mitchell in the first ball itself. But Mark Chapman and Martin Guptill stitched a 100-run partnership to steady the ship. Ravi Ashwin pulled things back for India with two wickets in an over as the Kiwis finished at 164/6 in 20 overs.

In reply, India made a blistering start with Rohit Sharma hitting the opposition bowlers at will. With KL Rahul back in the hut for 15, Rohit and Suryakumar Yadav joined hands to steady the ship. Rohit got out for 48 but Suryakumar continued in his usual self for a 40-ball 62 before being dismissed.

With 10 needing off the final over, debutant Venkatesh Iyer hit a four to bring the equation to five runs from five balls before Rishabh Pant finished the game with a four.

I bat the same way in the nets and replicate the same in the middle. The ball was coming on nicely with the dew coming in and later on it became really slow but in the end happy to be on the winning side.

Tim Southee (NZ): You always want to come out on the right side of the result. We played our best cricket and took it deep. Mark Chapman hasn’t played a lot of cricket of late, and to play the way he played was very pleasing to the side.

Ravi Ashwin: It was a slightly under-par score and we discusses 170-180 would be par before the game. We thought we would cruise home around the 15th over, but that's T20 cricket for you. I bowled the first over in the powerplay, and figuring out the pace to bowl is important and it took me some time to figure that out.

This was India's ninth win in 18 T20Is against New Zealand. India take 1-0 lead in the three-match series.

Bowling the last over, Daryl Mitchell starts off with a wide. Venkatesh Iyer pulls away Mitchell for a four in the first ball to bring down the equation for 5 from 5 balls. Iyer departs in the next ball trying to go over short third man. But Rishabh Pant finishes off with a four to win by five wickets.

Tim Southee dismisses Shreyas Iyer in the last ball of 19th over. Debutant Iyer in the middle. India need 10 from last six balls.

India look to finish the game early. Suryakumar Yadav continues his free-flowing batting with a couple of fours while Rishabh Pant also got one as Indian reach 142/2 (16)

Suryakumar Yadav is slowly picking up the pace. The Mumbaikar just uses his feet to hit Todd Astle out of the park in the first ball before hitting another four two balls later. India bring up hundred in 12 overs. India 102/1 (12)

Despite KL Rahul's dismissal early, the Indians have kept the scoreboard ticking. While Rohit Sharma is nearing another fifty, Suryakumar Yadav is playing the second fiddle. Wonder why India don't play like this in ICC tournaments. India 85/1 (10)

Rohit Sharma is at his marauding best. The India opener whacks his Mumbai Indians teammate Trent Boult for 4, 4, 6 to take 21 runs in the over. KL Rahul started the onslaught with a six off the first ball. 50 up for India in five overs.

Rohit Sharma is back at his best. The new India T20 captain nearly hits back-to-back sixes before huge six off the final to set the tone for India. India 24/0 (3)

The Indian openers are taking it slow and steady and taking their time. After seven runs from the first over, the duo take only two in the second. India 9/0 (2)

A good first over by India as they take seven runs from ut. Rohit Sharma and KL Rahul are in the middle. India 7/0 (1)

Wicket! Bhuvneshwar Kumar bowls a slower delivery, Tim Sieferr goes for a six on the off-side, hits the toe end of the bat and ends up giving a simple catch to Suryakumar Yadav. New Zealand 153/5 (18.2)

Deepak Chahar with a wicket. After hitting the Indian for a 93m six in the first ball, Martin Guptill goes for a biggie once again but ends up holing out to Shreyas Iyer at the boundary. New Zealand 150/4 (17.2)

Martin Guptill is simply unstoppable. The right-hander, standing on his knee,  hits a sensational six off Bhuvneswar Kumar. Meanwhile, Axar Patel drops Tim Siefert in the final ball over the over. New Zealand 144/3 (17)

As expected, Martin Guptill brings up his first fifty against Indian with a huge six off Mohd Siraj. New Zealand 123/3 (15).

Just what India wanted at this point in time.  Ravi Ashwin completely deceives a set Mark Chapman to give India the much-needed breakthrough. He has got another in the over, traps Glenn Phillips for a three-ball duck.  Chapman goes for 63. New Zealand 110/3 (14)

Mark Chapman brings up his first T20 fifty for New Zealand with a huge six off Axar Patel. He had one with Hong Kong. New Zealand 96/1 (12)

Martin Guptill joins the party. The right-hander has opened his arms against Mohd Siraj as he bludgeoned for a stunning six and a four in the over. New Zealand 81/1 (11). Martin Guptill (34*) and Mark Chapman (43*).

Mark Chapman (20*) has clearly led New Zealand's batting from the front. The right-hander has looked really well so far with his copybook shots against the Indian bowlers and is slowly moving towards his fifty.  New Zealand 55/1 (8)

A four by Mark Chapman to finish the over from Ravi Ashwin. New Zealand 48/1 (7)

Looks like Mark Chapman is targeting Deepak Chahar. The left-hander just hit the Indian pacer for two fours and a six to take 15 runs from the over. New Zealand 41/1 (6)

India have so far managed to hold New Zealand with their tight bowling. Mark Chapman (20*) and Martin Guptill (4*) have struggled against the Indian bowlers, sans Deepak Chahar, depending on ones and twos. New Zealand 26/1 (5)

After the dismissal of Daryl Mitchell, Mark Chapman and Martin Guptill have played some cautious shots in the next two including two fours. Deepak Chahar gave away nine runs in his first while Bhuvneshwar gave only a four in his second. New Zealand 15/1 (3)

Venkatesh Iyer: Everyone aspires to play cricket for the country. Feels good to play under Rahul (Dravid) sir, I'm really excited and looking forward to it. It's wonderful to play in front of the (Indian) crowd, it's great to have them back.

Tim Southee (NZ):  We would have bowled as well. Sad we could not win the T20 World Cup in Dubai, but this is a great place to play cricket and the team is looking forward to it.

Rohit Sharma (IND):  We will bowl first. The dew will play a big role here. Shreyas Iyer is back in the squad, Venkatesh is making his debut. Bhuvneshwar, Mohd Siraj and Deepak Chahar are back.

India have won the toss and they have decided to bowl first.

The pitch looks decent and has some grass on it. The ball is expected to come onto the bat easily and the batsmen find it easier to bat on as the match progresses. Dew is going to play a big factor at this venue.

Venkatesh Iyer has been handed his maiden international cap for India by none other than legendary Rahul Dravid. What a journey for this 26-year-old from Indore in the last couple of months.

Road to ICC T20 World Cup 2022 begins with this India vs New Zealand match in Jaipur. FYI, regular New Zealand skipper Kane Williamson and Kyle Jamieson have opted out of the T20 series and concentrate more on the two-match Test series.

The last time an international match was hosted at this venue was in 2013 when India defeated Australia in an ODI. The wicket at the Sawai Mansingh Stadium generally helps batsmen and today is not going to be any different. In IPL 2019, out of seven matches at the venue, six were won by sides chasing.

Hello and welcome from Sawai Mansingh Stadium in Jaipur. This is a big occasion for the Rajasthan Cricket Association as they are going to host their first-ever T20 international at the venue and what a match to start with.

Cricketers today have little time to recover and reflect. Under the circumstances, the odds are stacked against the New Zealanders. A defeat in a World Cup can be frustrating and more devastating for a team that was consistent and deserving.

The Kiwis have to quickly move on to this current series in India. The three T20s are followed by a two-Test series and New Zealand will be keener to defend their tag as the ICC World Test champions. In summer this year at Southampton, New Zealand edged out India in a rain-hit match but the upcoming Test series will be a huge test for them.

Kane Williamson pulled out on the eve of the first T20 in Jaipur and Kyle Jamieson follow suit. Both want rest for the Test series. The good news for the Kiwis is that Jimmy Neesham is fit to play. New Zealand are without Tim Southee and Devon Conway (injured) but have enough batting in Martin Guptill and the i-form Daryl Mitchell to challenge the Indian bowlers.

Having lost to New Zealand in the T20 World Cup, India will be hungry for revenge. India have had a change in personnel. This is first series for Rohit Sharma and Rahul Dravid as captain and head coach of the senior Indian men's team. The Indian team is brimming with talent. Several IPL top performers like Venkatesh Iyer, Ruturaj Gaikwad and Harshal Patel are waiting to shine on the international stage.