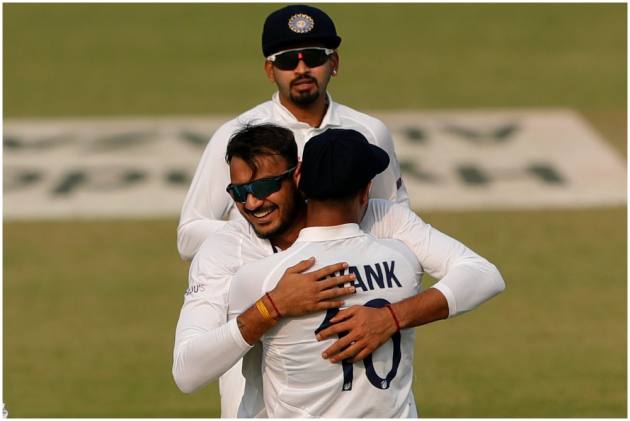 When New Zealand finished Day 2 at 129/0, many thought the Indians will have to toil hard for wickets against such a strong Kiwi batting line-up. But once the opening stand was broken by Ravi Ashwin, there was no looking back for India. If the first session went to New Zealand, the next two belonged to the hosts, led by Axar Patel, who claimed his fifth five-wicket haul in seven innings as the Kiwis lost 9 wickets for 99 runs, New Zealand were bowled out for 296 in reply to India's first inning total of 345. However, the only thing that went against the Indians on the day was Shubman Gill's wicket in the second innings before bad light stopped play. India start Day 4 with a lead of 63 runs.

The umpires checked the light metres again and its stumps on Day 3. Shubman Gill's wicket is the only good thing that happened for New Zealand on the day. India close the day at 14/1 with a lead of 63 runs.

Lightmeter is out. Kyle Jamieson continues. Thick outside edge off the last ball and Cheteshwar Pujara gets his second four. India lead by 59 runs. At least three more overs to go. IND - 10/1 (4) & 345

Ravichandran Ashwin cleans up William Somerville (6 off 52) to bowl out New Zealand for 296. Three for Aswhin, five for Axar Patel as Indian spinners go through the Kiwis. India lead by 49 runs. NZ - 296 (142.3)

India innings to follow. Four overs left in the day, to the scheduled close of play.

Ravichandran Ashwin gets his second. Kyle Jamieson's vigil comes to an end. The Kiwi all-rounder miscues and holes out, caught by Axar Patel at deep midwicket. He goes for 23 off 75. Ajaz Patel is the new man. New Zealand trail by 61 runs. NZ - 284/9 (139)

Axar strikes again after Tea. The ball keeps low for Tom Blundell as he falls for LBW. Blundell departs for unlucky 13. New Zealand 258/7

Ravindra Jadeja gets his first in the match. New man Rachin Ravindra, clean bowled, through the gates for unlucky 13. New Zealand 241/6

Axar is roaring in Kanpur at the moment. The left-arm spinner adds a third to his tally, and what a big fish this is for India. Tom Latham is stumped by KS Bharat for 95. New Zealand 227/5

After Ros Taylor, Axar Patel picks Henry Nicholls, plumb in front. The last few overs have been good from India's point of view. India slowly getting back in the game. Nicholls departs for 2. Tom Blundell in the crease. New Zealand 218/4

Another one bites the dust.  Ross Taylor tries to defend an Axar Patel delivery, gets an edge and KS Bharat does well to take a lovely catch. Taylor goes for 11. New Zealand 215/3

14 runs so far since the lunch break. Ross Taylor has joined Tom Latham in the middle. Latha (88*) inching towards another fine century. New Zealand 213/2

Big wicket for India just before lunch break. Kane Williamson fails to judge a Umesh Yadav delivery with the ball hitting the back pad. Williamson goes for 64-ball 18. India get rid of big fish. New Zealand 197/2

Looks like New Zealand are set to bat the whole day. Tom Latham has entered the 80s playing more than 230 balls so far while skipper Kane Williamson continues to frustrate the Indian bowlers with his defensive approach.

Ravichandran Ashwin is making all sorts of trouble for the New Zealand batsmen, but without wickets. Tom Latham (72*) and Kane Williamson (15*). New Zealand 184/1

Captain Kane Williamson joins the party. The New Zealand skipper is slowly opening his arms pushing Ravindra Jadeja for a couple of boundaries.

Finally the much-needed breakthrough for the Indians. Ravi Ashwin sends back Will Young for 89, caught behind by Bharat. Kane Williamson comes to the crease. New Zealand 151/1.

Wriddhiman Saha hasn't taken the field because of a neck issue. KS Bharat is keeping the wickets in place of Saha.

9:40 AM IST: News from the match officials

Hello and welcome to the third morning of the India vs New Zealand first Test here in Kanpur.  New Zealand still train India by 216 runs with Will Young and Tom Latham to start the proceedings. The Latham-Young opening stand is also the third-highest partnership by a NZ pair in India.

It's been an even contest at Green Park. If centurion Shreyas Iyer and Ravindra Jadeja's partnership stood out on Day 1 on Wednesday, New Zealand showed their character on Friday, shining both with ball and then with the bat.

In the absence of Trent Boult, Tim Southee showed why is still a force to reckon with. His second five-wicket haul against India gave the Kiwis a massive breakthrough on Friday and then the Kiwi openers responded perfectly on a good batting track at Green Park.

Day 3 of a Test match usually lends a direction and if India have to protect their formidable record in Kanpur, the bowlers need to do their job. Early. The ball is 59 overs old and with three specialist spinners in the team, it is no brainer that stand-in captain Ajinkya Rahane will look up to his lead spinners Ravichandran Ashwin and Ravindra Jadeja to strike quickly and regularly.

Latham (50) and Young (75) produced the first century opening partnership by a visiting team on Indian soil in five years. They looked solid, used their footwork well against the spinners, profited from the DRS but showed fine temperament in front of boisterous Kanpur fans.

Young played more attacking cricket as he finished the day with 12 boundaries. His second half-century came off 88 deliveries. Theirs is the highest opening stand by New Zealand in India in 17 years.