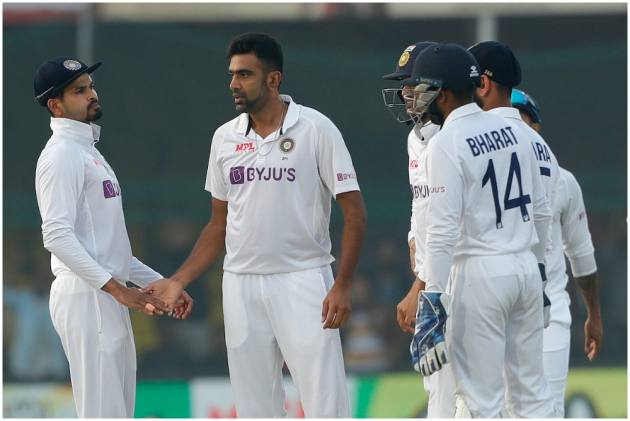 Against New Zealand, India started Day 4 of the first Test on Sunday with a lead of 63 runs. On a Green Park pitch aiding spinners, New Zealand used the conditions well picking up four quick wickets as India were tottering at 51/5. However, it was first-innings centurion Shreyas Iyer (65) and Wriddhiman Saha (64*) who revived India to declare at 234/7 setting New Zealand a target of 284 runs to win. In reply, the Kiwis have already lost Will Young in their chase. No overseas team have chased down more than 276 in India in the second innings. With Ravi Ashwin, Ravindra Jadeja and Axar Patel in the ranks, India have the upper hand going into the final day. Catch the highlights of Day 4 of India vs New Zealand first Test.

It's all for the day in Kanpur. First Shreyas Iyer and Wriddhiman Saha brought India back in the game with respective half-centuries before Ravi Ashwin picked up a Will Young's wicket as New Zealand go into the final day with nine wickets in hand and 280 more runs to win.

And a wicket straight away. Ravi Ashwin with the magic fingers. Will Young is back in the hut, LBW for 2. New Zealand 4/1, more 280 to win

Kiwi openers Tom Latham and Will Young are in the middle. Ravichandran Ashwin with the new ball. New Zealand had chased 317 against Bangladesh in Chittagong more than a decade ago. But no team has chased down more than 276 in India.

If Shreyas Iyer has revived India in this Test match in both the innings, Wriddhiman Saha has been the man to keep India in the game so far. Carrying a neck stiffness, the Bengal boy has survived 85 balls so far for his 35 under pressure to extend India's lead. India 191/7

Wicket for New Zealand. Good innings comes to an end for Shreyas Iyer. Pitched short by Tim Southee, Iyer goes for the pull, down the leg side and gets a nick to the keeper. Iyer goes for 65. India 167/7. Tea announced

50 for Shreyas Iyer. What a match the Mumbaikar is having. He thus becomes the only Indian to score a 100 and a 50 on debut in Tests. India's lead reaches 200. Wriddhiman Saha is giving him able support from the other end.  India 151/6

A four and a six from Wriddhiman Saha, off Will Somerville to ease the pressure. India 130/6

More misery for India as Ravi Ashwin is clean bowled by Kyle Jamieson for 32. Wriddiman Saha, who didn't take the field on Day 3 due to a stiff neck, is out in the middle. India 107/6

Lunch has been taken on Day 4 and it's New Zealand who are on top.  Starting the day at 14/1, India have lot four more wickets to slip down the barrel. Shreyas Iyer and Ravi Ashwin are currently at the crease. India 84/5

Two in an over for Tim Southee. After Mayank Agarwal, Southee dismisses Ravindra Jadeja, plumb in front for a duck. Ravi Ashwin comes in the middle. India 51/5

Ohh no no! New Zealand on top in this Test match. India lose their third wicket in the morning with Mayank Agarwal, caught by Tom Latham, off Tim Southee for 17. India 51/4

The onus is on Mayank Agarwal and Shreyas Iyer to steer Indian from here on. The stage is set for the duo. They just need to accelerate. 50 up for India. India 51/3

Trouble for India as they lose captain Ajinky Rahane for just 4. Ajaz Patel gets the wicket First inning centurion Shreyas Iyer comes to the crease. Can he replicate his form? India 41/3

Two fours to start the day with for India, Cheteshwar Pujara and Mayank Agarwal are currently at the crease.  Bat deep, score as much as you can - Motto for India today. India 23/1

Ravichandran Ashwin is just a wicket away from matching veteran Harbhajan Singh's tally of 417 wickets. Ashwin surpassed Wasim Akram (414) yesterday. As it looks, India are going to bat the full day leaving the visitors with a mountain of runs on the final day to achieve. In that case, Ashwin surpassing Bhajji can be seen only on Monday.

Hello and welcome to the fourth day of the ongoing first Test between India and New Zealand.

Axar Patel has spun India's fortunes on Day 3 of the first Test in Kanpur. The lanky left-arm spinner took his fifth five-wicket haul to help India bowl out New Zealand for 296 after the visitors made a promising start.

Green Park has always been a spinners' paradise and it was not surprising to see Patel, Ravindra Jadeja and Ravichandran Ashwin sharing the spoils as New Zealand kept losing wickets regularly on Saturday.

New Zealand lost four wickets on each side of the tea break and thus crashed from 197 for 2 in 85.3 overs to 296 all out in 142.3 overs. The biggest blow came when Tom Latham was stumped off Patel in the 103rd over. The New Zealand opener fell five runs short of his century after a lengthy innings.

He top-scored with 95 runs, facing 282 balls and hit 10 fours. New Zealand lost their last eight wickets for 82 runs in the first innings as Patel’s fiery 5/62 put India in command. Axar Patel bowled Tim Southee to pick up his fifth wicket and became the first left-arm spinner in Indian cricket to pick five five-wicket hauls in a calendar year. He has achieved this feat in seven Test innings in 2021.