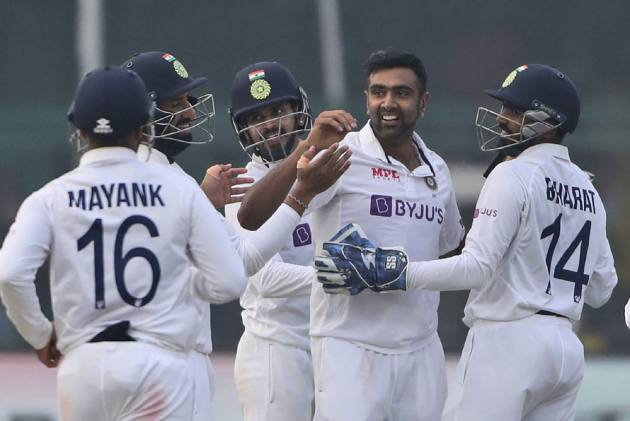 India almost got their revenge. The last time they met New Zealand in a Test match, it lasted six days in England with rain playing its part. But in Kanpur, with the onset of winter, there's no rain, only dust and fog. And Indian spinners almost did the work. The trio of Ravichandran Ashwin, Ravindra Jadeja and Axar Patel were brilliant but not good enough, as it proved rather disappointingly. The Kiwis survived the final session of play under the fading light to share the first Test honours at Green Park. Catch highlights and cricket scores of IND vs NZ.

The finalists of the inaugural ICC World Test Championship edition traded blows for five days only to in a draw, fittingly. But the visitors have their moral victory. Needing another 280 runs on the final day, the Kiwis reached 79/1 in 35 overs at Lunch, and 125/4 in 63.1 overs at Tea with Kane Williamson becoming the latest wicket. Then, five quick wickets and an unbeaten 52-ball final wicket stand from Rachin Ravindra and Ajaz Patel to spoil India's party. Ravindra faced 91 balls for his 18. The result means that India have lost crucial ICC Test Championship points at home.

Ravindra Jadeja to Axar Patel and another maiden. And with that mandatory overs completed. Another round of conference in Kanpur and umpires with the big decision. Bad light stops play, and India and New Zealand share the honours. It's a draw.

Gone... Another one. Tom Blundell plays on to his stumps and Ravi Ashwin has got another. New Zealand 138/7. India need three more wickets to win the match. Kyle Jamieson in the middle.

It's raining wickets here in Kanpur. Ravindra Jadeja strikes once again, this time he has dismissed Kane Williamson, LBW for 24. New Zealand 128/6

Axar comes to the party. Wickets before and after Tea. India on the up. Axar traps henry Nicholls for LBW for just 1. New Zealand 128/5

Out. India have the much-needed breakthrough with Tom Latham chopping on a Ravi Ashwin delivery.  Latham departs for 52. Can India turn it on?

100 up for New Zealand. Fifty for Tom Latham. This is the second time Latham has crossed the 50-run mark in this Test match. New Zealand 111/2

What a start for India after lunch. Umesh Yadav strikes on the first ball after lunch, Will Somerville pulls, Shubman Gill takes an excellent catch. India get the breakthrough. New Zealand 84/2. Somerville goes for 36.

Will Somerville (36*), Tom Latham (35*) frustrate India on the final day. The hosts are still in search for a breakthrough. New Zealand 79/1 at lunch

Coming as nightwatchman yesterday after the departure of Will Young, Will Somerville is playing some serious cricket in Kanpur today. The right-hander has so far played around 100 balls for his 28. Tom Latham is not out at 30 at the other end. New Zealand 64/1

Ishant is back and running. India still in search of that breakthrough. New Zealand 52/1

India's Day 4 hero, wicketkeeper Wriddhiman Saha will not take the field on the final day, due to his neck stiffness, BCCI said. "Wriddhiman Saha felt stiffness in his neck while keeping in the second innings. It was affecting his movement while wicket-keeping. KS Bharat will keep wickets in his absence on Day 5," BCCI said.

William Somerville (18*) and Tom Latham (10*) seem to have taken on the Indian bowlers. For India, it's all about one wicket, that could change the course of the game.  New Zealand 32/1

Bad news coming from the India camp as it looks like Ishant Sharma has dislocated his finger while trying to stop the ball. Ishant is in pain and is being taken out off the field. Suryakumar Yadav is the substitute fielder. New Zealand 5/1

Hello and welcome to the final day of the interesting Test match between India and New Zealand. The scales are in India's favour. Can New Zealand do the unthinkable?

The Kanpur Test has been a fantastic advertisement for the longest form of the game. The twists and turns every day have provided classy entertainment to fans who love the purest form of the game. It is only in the fitness of things that the India vs New Zealand contest is all set for a thrilling finish.

New Zealand may have lost the promising Will Young in the final session of play on Sunday, but the Blackcaps have batsmen like Tom Latham Kane Williamson and Ross Taylor, who have the pedigree to play and win matches in challenging conditions.

But it will easier said than done for the New Zealanders as the Green Park pitch is expected to favour India's spinners, who have taken 10 of the 11 New Zealand wickets to have fallen so far.

India did all the hard work on Sunday. Shreyas Iyer has been the standout batsman for the home team. Iyer became only the third Indian batsman after Lala Amarnath and Dilawar Hussain, to top score for India in both innings on his Test debut.

Who would have imagined that India will stage such a superb turnaround after being 51 for five in their second innings?

It was Shreyas Iyer who featured in two 50-plus stands that bailed out India. Ravichandran Ashwin and Iyer added 52 runs for the sixth wicket and then Iyer put on 64 runs for the seventh wicket with Wriddhiman Saha.

The Indian innings got a further boost when Saha and Axar Patel shared an unbroken stand for 67 for the eighth wicket. India declared at 234 for seven, leaving the Kiwis with a target of 284 in a little over three sessions.

Axar, who took five wickets in the first innings, and Ashwin, who took three, will be India's go-to men on Day 5.