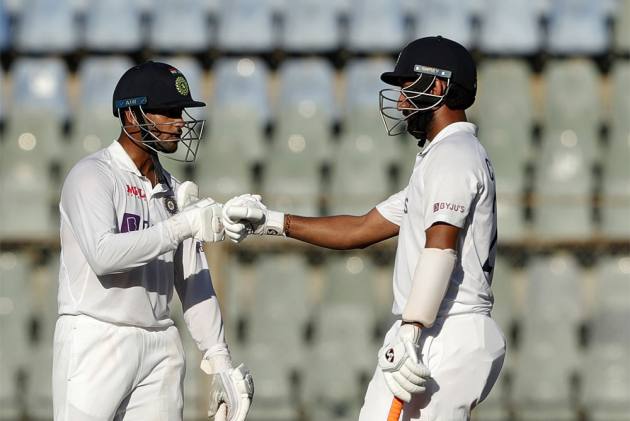 India extended their overall lead to 332 runs after bowling out New Zealand for 62 in their first innings of the second Test in Mumbai on Saturday. At stumps on the second day, India were 69 for no loss in their second innings. Mayank Agarwal and Cheteshwar Pujara were batting on 38 and 29, respectively after India decided against enforcing follow-on despite taking a huge first-innings lead of 263 runs. Catch Day 2 highlights and cricket scores of the second India vs New Zealand Test match.

Earlier in the day, New Zealand left-arm spinner Ajaz Patel became only the third player in Test cricket to pick all 10 wickets in an innings in India's first innings total of 325 all out. Opener Mayank Agarwal top-scored for the home team with a fine 150, hitting 17 boundaries and four sixes during his long stay in the middle. Axar Patel contributed 52 runs down the order as India crossed 300 before Ajaz wrapped up the innings to finish with incredible figures of 10/119 in 47.5 overs. The Indian bowlers hit back in style to bundle out the visitors for just 62 for a massive lead.

William Somerville with his second over. Six from it, including a four off the fourth, hit by Mayank Agarwal. And stumps. India lead by 332 runs. IND - 69/0 (21)

Kyle Jamieson with his third over. Mayank Agarwal pulls the fourth ball for a four to bring up a fifty-run stand with Cheteshwar Pujara. In the previous over, Pujara survived a sure LBW off the last ball. Ajaz Patel unlucky. India lead by 313 runs. IND - 50/0 (15)

India will bat for the second time after taking a 263-run lead. Cheetshwar Pujara to open with Mayank Agarwal. Shubman Gill, who was hit on the elbow earlier in the day, is not fit to bat.

Shreyas Iyer takes a stunning catch to wrap up the New Zealand first innings. And the second wicket for Axar Patel. Kyle Jamieson out for 17 off 36. India take a 263-run first innings lead. NZ - 62 all out (28.1)

Ashwin gets his fourth. He gets Will Somerville, caught by Mohd Siraj for 26-ball duck. New Zealand 62/9

Has the pitch deteriorated completely? Ravi Ashwin now has two wickets in an over as New Zealand are 54/8. Ashwin dismisses Tom Blundell for 8 before removing Tim Southee for a duck.

Jayant Yadav also has one now. He dismisses Rachin Ravindra for 4. New Zealand 38/6

What a delivery from Ravi Ashwin first up. Henry Nicholls tries to play for the turn, misses it completely to see his timbers shattered. Nicholls goes for 7. New Zealand in major trouble, 31/5 in reply to India's 321

Axar joins the party. It's been raining wickets here in Mumbai today. Axar traps Daryl Mitchell plumb in front. New Zealand 27/4. So far 10 wickets have fallen on the day.

Another one bites the dust for New Zealand and it's Mohammed Siraj again. He cleans up Ross Taylor for 1.

Two in an over for Siraj. What a start he has given to India. After Will Young, Siraj sends Tom Latham packing for 10. New Zealand 15/2

Will Young and Tom Latham start the batting for New Zealand. Kiwis 10/0

Ajaz Patel dismisses Jayant Yadav and Mohammed Siraj to get all the 10 Indian wickets in Mumbai. India all out for 321. Ajaz joins the elite company of  Jim Laker and Anil Kumble to take all the 10 wickets in an innings in Tests.

Wicket No.8 for Ajaz Patel. Axar Patel's fine knock of 52 comes to an end, LBW. Ajaz needs just two more to catch Anil Kumble in taking all 10 wickets in a Test match innings.

Gone! Mayank Agarwal, who just reached 150 with a four off Ajaz Patel is out on the next ball, caught behind by Tom Blundell. Mayank departs for 151. Ajaz gets another. Can he finish with 10 wickets?  India 291/7

It's been session India barring the two wickets of Wriddhiman Saha and Ravi Ashwin. Mayank Agarwal has been rock solid during his stay while Axar Patel is batting at 32 off 98 balls.

Axar Patel (22*) has provided India with the much-needed batting option down the order. He played a perfect second fiddle in the last Test. He is doing it here too. Inda 258/6. Mayank Agarwal still batting at 133.

250 comes up for India with a flick from Azar Patel off Tim Southee. A second new ball has been taken. India 251/6

Ajaz Patel becomes the first New Zealand spinner to register a fifer in the first innings of a Test match in India. The previous best was Jeetan Patel's 4/100 in Hyderabad in 2012.

A maiden over to start the day from Tim Southee. Meanwhile, the weather looks clear with blue skies overhead. India 221/4

Hello and welcome to the Day 2 of the second and final Test match between India and New Zealand in Mumbai. Day 1 belonged to Mayank Agarwal and the right-hander will aim to build on the momentum. A total of 98 overs to be bowled on the day.

It was quite a dramatic first day in Mumbai on Friday. Rain robbed the entire first session and then when India batted after winning the toss against New Zealand, the hosts suffered a top order meltdown, Virat Kohli's dismissal generated some controversy and Mayank Agarwal's century finally cooled nerves in the Wankhede dressing room.

The suspense over who will make way for Kohli in the Indian playing XI proved to be a damp squib. The BCCI released a press statement in the morning saying Ajinkya Rahane, Ravindra Jadeja and Ishant Sharma were injured and would miss the Mumbai Test. What took BCCI so long to communicate this is another question.

Mayank Agarwal took full advantage of this opportunity. The opener rescued India from a precarious position (80 for 3) as India reached 221 for 4 at stumps.

Ending a 13-innings streak of poor form, Agarwal finished the day at 120 not out, while Wriddhiman Saha was unbeaten on 25. Their fifth-wicket partnership was worth 61 runs and was looking good for more when bad light ended play.

Ajaz Patel took 4 for 73 in 29 overs to put a dent in the Indian top-order, with Cheteshwar Pujara and Virat Kohli both falling for ducks.