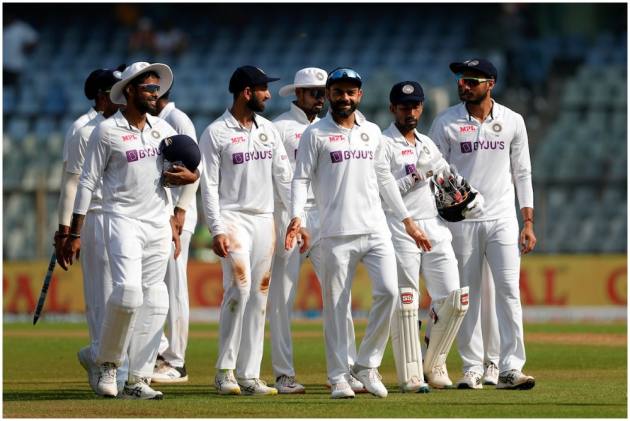 India defeated New Zealand by 372 runs in the second Test at Mumbai's Wankhede Stadium. With their top five already down at the end of Day 3, it was just a matter of time for India win the game on Monday. As said, the Indians were right on the money on Monday morning as Jayant Yadav's 4/34 ensured the hosts to complete the victory within an hour. Henry Nicholls did provide some resistance with a patient 44 but missed support at the other end. Earlier, batting first, India put on 321 with Ajaz Patel taking all the Indian wickets. In reply, New Zealand were bowled out for a paltry 62 runs. Mayank Agarwal scored 150 for India in the first innings. Mayank once again starred for India with a 62 in the second innings as the hosts declared at 276/7 giving New Zealand 540 runs to win. Catch the highlights of India vs New Zealand second Test match here.

Virat Kohli (IND): It's always good to win. The New Zealand batsmen batted well in Kanpur for a draw. Here, the wicket had more bounce which helped the pacers as well so it gave us a better chance to win the match. South Africa will be a tough challenge and we want to give it all there for a win.

Tom Latham (NZ): We are disappointed with the performance. When you are 62 all out, it's always a setback. It was a special game for Ajaz Patel. Time for us to go home and start preparing for the Bangladesh series as soon as possible.

11:05 AM IST: Ravichandran Ashwin is the Player of the Series

I think I've got 10 (Player of the Series awards now). I have always enjoyed playing here honestly. I also congratulate Ajaz Patel for his wonderful performance. Jayant and I share a good bond for long as we have trained together before. He flew to Chennai from Haryana in 2014 to pick my mind.

10:58 AM IST: Mayank Agarwal is the Player of the Match

This knock here in Mumbai is special for me. After the Kanpur Test, I didn't change anything but had the mental discipline and determination. Rahul (Dravid) bhai's advice not to tinker with the technique mid-series helped. Sunny (Sunil Gavaskar) sir said I should keep my bat low early on in the innings and open up my left shoulder.

# The 372-run win over New Zealand here in Mumbai is India's largest victory in terms of runs. The last time India won a Test match by a 300-plus margin was in 2015 when they defeated  South Africa by 337 runs in Delhi.

# The loss in Mumbai was New Zealand's biggest loss in terms of runs (372).

# This victory was India's fifth-largest win over New Zealand in Tests.

# Ravichandran Ashwin is now second on the list of most Test wickets at home with 300 scalps. Anil Kumble leads the table with 350 wickets.

It's good to finish the series on a winning note. Unlucky, we couldn't take the final wicket in the last match. The whole credit goes to the players. They have pulled themselves back from tour positions. A lot of players in the team don't get to play a lot of Test cricket. It's nice to see the likes of Shreyas Iyer, Mayank Agarwal, Axar Patel and Jayant Yadav step up when given an opportuity.

Ajaz Patel (NZ): I have worked hard doing before going into this Test match. Have spent several days in isolation but now time to recover and spend some quality time with the family back home. Feel lucky to have achieved something special in this Test match.

Jayant Yadav (IND): There was moisture in the pitch and it helped. The only thing we had to do was to bowl in the right areas and it helped.  Yes, I may have missed a fifer but helped in the team's cause.

Ravichandran Ashwin and Jayant Yadav clean up the tail as India win the match by 372 runs and also the series.

Out! And once again it's Jayant Yadav, traps Kyle Jamieson in front. Jamieson goes for a last-second review but it goes in favour of India. He gets another in the over. Tim Southee dances down the track, is beaten by spin and gets bowled for a duck. The hosts are two wickets away from a series victory. New Zealand 165/8.

India have struck early in the morning. Jayant Yadav with the breakthrough. Rachin Ravindra goes forward to defend, gets an outside edge to Cheteshwar Pujara for 18. new Zealand 162/6

First runs in the morning from the bat of Rachin Ravindra, a four off Jayant Yadav. New Zealand 144/5.

Hello and welcome to Day 4 of the second and final India vs New Zealand Test match in Mumbai. The equation is simple. New Zealand need a whopping 400 runs, India require just five wickets. This could also be the last day in this Test match.

A combination of poor application and low morale have left New Zealand reeling in the Mumbai Test against India. The hosts have batted and bowled New Zealand out of this match and it will need more than a miracle for New Zealand (140 for five at stumps on Day 3) to get another 400 runs with half the team back in the pavilion.

India's bowlers have complimented their batsmen perfectly. Ravichandran Ashwin (3 for 27) has used the new ball and the old ball with his customary guile and it was this veteran off-spinner who left the Kiwi top order all at sea on Day 3 on Sunday.

Axar Patel has played a wonderful supporting role and Virat Kohli will look up to his spin troika -- Jayant Yadav is the third spinner -- to finish off the match with more than a day to spare.

For New Zealand, Mumbai-born left-arm spinner Ajaz Patel has been the only talking point. Ajaz Patel finished with match figures of 14 wickets for 225 runs for the best match haul in Test cricket for any visiting bowler in India. The previous best was Englishman Ian Botham’s 13 wickets for 106 runs in 1980, also in Mumbai.