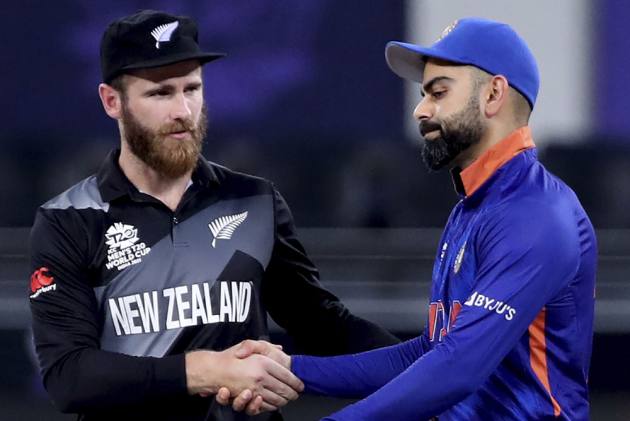 Another humiliating defeat for India as New Zealand thrashed a clueless Virat Kohli & Co by eight wickets with 33 balls to spare in their second Super 12 match of ICC T20 World Cup 2021. Seven days after suffering a 10-wicket hammering at the hands of arch-rivals in Dubai, a reluctant, hesitant India lost the plot against the Kiwis at the same venue on Sunday for a second straight defeat. Meaning, India's chances of making the last four now are out of their hands. India lost the toss, then struggled to score runs freely. Ravindra Jadeja top-scored for India with a 19-ball 26. Trent Boult (3/20) led the Kiwi attack with a brilliant spell of pace bowling. Then, Martin Guptill (20 off 17), Daryl Mitchell (49 off 35) and Kane Williamson (33 not out off 31) played good knocks. India made a couple of changes, bringing in flamboyant Ishan Kishan for unfit Suryakumar Yadav and 'on-demand'  Shardul Thakur of Bhuvneshwar Kumar. But nothing worked for the Men in Blue, even with Hardik Pandya playing as a pure all-rounder. India will now take on Afghanistan (November 3), Scotland (November 5) and Namibia (November 8) -- all minnows, and they can still have six points to push for a semi-final spot. But the Kiwis are also playing the same three. They next face Scotland on November 3. In fact, New Zealand are not out of the wood yet. Afghanistan, who earlier in the day, hammered debutants Namibia, will be difficult to contain. They face off on November 7. For the record, India have lost all three T20 World Cup matches against New Zealand. And in ICC events, it's 1-8. May be, some 'mauka' is here. Catch highlights and cricket scores of IND vs NZ, T20 World Cup match here:

10:40 PM IST:  Virat Kohli sums up India's performance. And it's brutal. "I don't think we were brave enough with bat, ball, or our body language."

Hardik Pandya with his second over. Kane Williamson plays a sensational ramp shot, over Rishabh Pant off the fourth ball, and four to fine leg. A wide, then a four, through cover. Four needed. A single to end the over. 12 from the over. New Zealand need three in 36. NZ - 108/2 (14)

Jasprit Bumrah with his final over. And second wicket for him tonight. Daryl Mitchell, on 49, goes for the glory shot but ends up offering an easy catch for KL Rahul at long on. Devon Conway is the new man. NZ - 96/2 (12.4)

Ravindra Jadeja continues. A single off the first, then Kane Williamson delicately guides the second for a four to third man. Nine from the over. NZ - 64/1 (8)

Bowling change. Mohammed Shami on. Two singles, then a wide. Kane Williamson takes a single to cover. A dot, then Daryl Mitchell hits the fifth ball for a six, over square leg boundary. A single to end the over. 11 from the over. NZ - 55/1 (7)

Bowling change. Ravindra Jadeja on. A single, then Daryl Mitchell connects the second for a six, over long-on. A dot, then a four to mid-wicket. Another four, this time to sweeper cover. 14 from the over. NZ - 44/1 (6)

Varun Chakaravarthy continues. A dot to Kane Williamson, then a single to short third man. Another dot, then a single, to long on as Daryl Mitchell rotates the strike. To dots to the Kiwi skipper. Two runs from the over. NZ - 30/1 (5)

Jasprit Bumrah continues. Two wides, down the leg. Two dots, then a four to log-off as Martin Guptill plays a lofted drive over Hardik Pandya at mid-off. Bumrah gives India the breakthrough. Mistime shot from Guptil and Shardul Thakur takes the catch at mid-on. Guptil goes for 20 off 17. Kane Williamson is the new man. NZ - 24/1 (3.4)

Varun Chakaravarthy continues. A dot, then Martin Guptill hits the next two balls for fours. 12 from the over. NZ - 18/0 (3)

Jasprit Bumrah shares the new ball. A single, off the fourth, as Martin Guptill plays it to mid on. Two dots to Daryl Mitchell. NZ - 6/0 (2)

Varun Chakaravarthy with the first over. Martin Guptill takes a double off the first ball, square leg. Two singles and one leg bye. Five from the over. Target for New Zealand - 111 runs.

Tim Southee on with the final over. Ravindra Jadeja hits the third ball for a six, over mid-wicket boundary. 11 from the over. Southee's figures: 1/26. Trent Boult conceded five runs, including a four off the fourth ball, for two wickets in the previous over. His figures: 3/20. 37 runs in the last five overs. IND - 110/7 (20)

Adam Milne returns for his final over. Ravindra Jadeja takes a single, then a dot to Hardik Pandya. Three singles, all to long on. A four, through the cordon as Jadeja delicately guides it. Or, a fine nick. Eight from the over. Milne's figures: 1/30. 32 runs in the last five. IND - 94/5 (18).

Trent Boult returns. Hardik Pandya takes a single. Swing and miss from Ravindra Jadeja. A single to long on. Two more singles. A short and wide delivery and Pandya slaps it over backward point. A welcome boundary. Eight runs from the over. IND - 86/5 (17)

New man Ravindra Jadeja survives. Hit bove the knee roll but the Kiwis take the review, only to lose it. Six from Adam Milne's third over. IND - 73/5 (15)

Adam Milne back for his third. Two singles, then a wide. Then timbers. One expansive swing and Rishabh Pant is gone. Bowled. He goes for 12 off 19. Ravindra Jadeja is the new batter. IND - 70/5 (14.3)

Ish Sodhi returns. A single to long on. And Jimmy Neesham converts a certain six to a single with a flying effort at deep backward square after Hardik Pandya gets a huge top-edge. A dot, then two singles. One leg bye to end the over. Five from the over. IND - 67/4 (14)

Tim Southee with his third over. Four singles. Rishabh Pant and Hardik Pandya not taking risks. 21 runs in the last five overs. No boundaries in the last six overs. IND - 62/4 (13)

Mitchell Santner with his final over. Another quiet one. Six from it. His figures: 0/15. In the previous over, Ish Sodhi conceded four singles for Virat Kohli's wicket. IND - 58/4 (12)

Ish Sodhi on with his second. Virat Kohli goes for a biggie, but ends up offering a catch to Trent Boult at long on. And Boult accepts gleefully. Kohli goes for 9 off 17. Hardik Pandya is the new man. IND - 48/4 (10.1)

Mitchell Santner with his third over. Two dots to Virat Kohli, then two singles. Kohli plays the fifth ball to sweeper cover. A single to end the over. Five from it. 29 runs in the first five overs, and 19 in the next five. IND - 48/3 (10)

Bowling change. Ish Sodhi on. Virat Kohli takes a single off the first, to long on. A single, then a dot to Rohit Sharma. Rohit goes big but ends up giving a catch to Martin Guptill at long on. Rohit goes for 14 off 14. Rishabh Pant is the new man. IND - 40/3 (7.4)

Another tidy over from Mitchell Santner. Two singles, off the first and last. IND - 37/2 (7)

Tim Southee returns for his second over. KL Rahul welcomes back him with a four, to fine leg. But Southee exacts his revenge. Rahul holes out at deep square leg with Daryl Mitchell taking another catch. Rahul goes for 18 off 16. Virat Kohli is the new man. IND - 35/2 (5.5)

Bowling change. Mitchell Santner on. And singles off the second and third balls. IND - 14/1 (4)

Two in two, almost, for Trent Boult. Rohit Sharma takes on his Mumbai Indians team-mate but he hits straight to Adam Milne at long on. And dropped. A sitter. Six runs and a wicket from the over. IND - 12/1 (3)

Trent Boult continues. Ishan Kishan hits the second ball for a four, but the Kiwi pacer gets him. Kishan (4 off 8) holes out at deep, caught by Daryl Mitchell. IND - 11/1 (2.5)

Tim Southee shares the new ball with Trent Boult. Three dots, then KL Rahul beats mid-on fielder with a lofted drive for a four. Five from the over. IND - 6/0 (2)

A single off the second ball, and Ishan Kishan survives a LBW shout off the fourth.

Players take the knee and KL Rahul to take the strike. His opening partner is Ishan Kishan. Trent Boult with the new ball.

One change for New Zealand. Adam Milne comes in for Tim Seifert, and Devon Conway will keep for the Kiwis. A couple of changes for India. Virat Kohli reveals that Suryakumar Yadav is having a back spasm. In comes Ishan Kishan. Also, Shardul Thakur replaces Bhuvneshwar Kumar. Meaning, Hardik Pandya starts.

Kohli not happy with the scheduling though. Says "it's ridiculous, we are playing twice in 10 days. too long a break."

New Zealand win the toss and bowl first against India. Kane Williamson says, because of the dew factor.

On this day, 34 years ago, Chetan Sharma took a hat-trick against New Zealand in Nagpur during a 1987 World Cup group match. Same opponents tonight, and India need a win to keep their hopes alive.

But he had been this close to not even making it to the India squad because of a finger injury!

The T20 rivalry started with their first-ever meeting in the 2007 World Cup. New Zealand won by 10 wickets at Wanderers. It took nearly a decade and six matches for India to taste a win against the Kiwis. But, India are on a roll in this fixture, winning the last five, including two Super Overs. Tonight, they are meeting for the 17th time, and the head-to-head record is inseparable: 8-8. Then again, the Kiwis have a 2-0 in the World Cups. India lost the Nagpur clash by 47 runs in the 2016 World Cup.