A clinical India beat Pakistan 3-1 to consolidate their position at the top of the 2021 Men's Asian Champions Trophy competition. Harmanpreet Singh scored a brace. Catch highlights of India vs Pakistan hockey match. 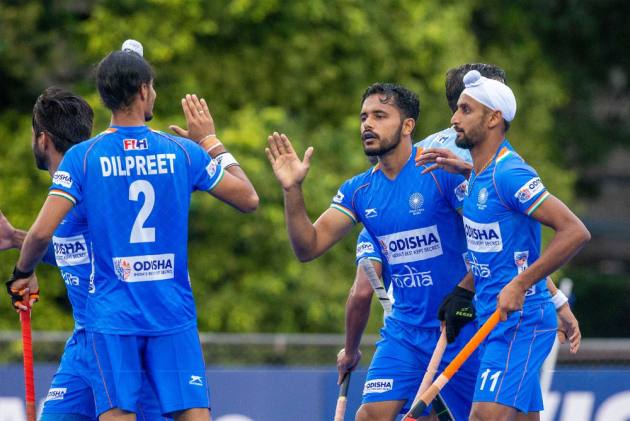 In a replay of the last edition's final, which never happened due to heavy rain in Muscat, India dominated the proceedings but Pakistan created their own chances without really threatening to score. India, who had earlier drawn 2-2 with South Korea in the tournament opener, currently lead the standings with seven points from three games. Pakistan, still winless, have one point from two games. They were held to a goalless draw Japan on Tuesday. India will play Japan in their last match on Sunday before the knock-outs.

Seven points will be more than enough for three-time winners India to make the semis in the five-team tournament. South Korea and Japan are currently second and third respectively with two points each from two draws. Hosts Bangladesh are fifth with one defeat. Malaysia pulled out of the tournament. Catch highlights of the IND vs PAK hockey match:

And the final hooter goes. India beat Pakistan. An error-strewn performance but still good enough for the Olympic bronze medallists.

Abdul Rana on a spell. He beats the Indian trap and almost make it a second for Pakistan. But Indian defence up to the mark. Now dying seconds...

Less than a couple of minutes remaining in the match. Pakistan win the possession back. Sumit does the dirty work for India, and a counter from the right.

Hardik injects and Manpreet stops, then Varun Kumar goes for the ball. And Ali Mubashar defends. Another referral for India as Manpreet thinks is not a long corner. A foot or not? And it's a stick, not the foot. India lose the referral but win a long corner.

A push from Abu Mahmood to Shamsher Singh inside the Pakistan D and India asking for a review. And it's PC for India in the dying minutes.

A rare mistake from India to concede possession inside the defensive third. But they recover well to launch an attack. Shilanand Lakra goes for a tomahawk but the referee catches his reverse stick. And Pakistan on the attack from the following play. And they miss a chance.

Umar Bhutta at the receiving after a collision with Shilanand Lakra in the midfield. Nice gestures all around. Pakistan, then, win a PC. India not challenging. Late tackle. Another block from Suraj Karkera. And Jarmanpreet Singh on the attack. End to end stuff. No breather. This is like a 100m dash from either end.

Crazy game now. Ali Mubashar goes for the goal from the PC and Suraj Karkera blocks, and India launch a counter. And they win a PC. For stick check, just like the one committed by Nilam. And another Harmanpreet Singh clean strike. Second for him. India now lead 3-1.

Pakistan takes the referral to challenge the PC. And they keep it. An aerial ball inside the D, and the ball touches the stick of an Indian player. On the counter, Pakistan get their PC. Stick check from Nilam Sanjeep Xess. Also a green card.

Manpreet Singh takes a breather as India use subs generously. Akashdeep gets feed with a brilliant long ball. He just needs to make a contact. What a chance for India. Sumit is having a brilliant game. Even to pick Akashdeep inside the D, what a vision.

Last 15 minutes. Frentic start to the quarter and Ajaz Ahmad forces India to scamper. A review for a PC. And it's PC. And India take their review. Manpreet's foot in play here.

GOAL! Pakistan are back. Junaid Manzoor flicks one past Krishan Bahadur Pathak to pull one back. A nice move from the left flank and a heavy deflection beats Indian markers. Nice skills from Manzoor to beat the onrushing Pathak.

GOAL! Akashdeep Singh slides and slots one. Second for India. Sumit starts the move with a brilliant pass to Shilanand Lakra, who breaches the Pakistan defence from the left. And Akashdeep just needs to slot. Easy as it comes.

Green card for Muhammad Hammadudin. India reassess their game-plan. Start from the back, switching flanks.

India relentless. A long ball and out of play. Pakistan having a rare spell. Mandeep Mor almost gives away a pass in the defensive third. Lucky for him that Abdul Rana fails to keep the ball.

Mandeep Mor waiting for a feed but Ali Mubashar clears the line for Pakistan. India still having a dominant possession.

A strong start from India in the third quarter. Umpire warns both teams to play it clean.

What a counterattack from India. Manpreet Singh bosses the midfield then links up with Lalit, but the final attempt lets down.

Players are back. Pakistan head coach Siegfried Aikman not happy with some of the decisions in the first half.

3:47 PM IST: The key so far has been India's tidy defensive work rather than the attack. Allowing only four circle entries in the first half is simply brilliant. And of course, a lethal Harmanpreet bang on target as India convert from the lone PC of the match so far.

Muhammad Hammadudin starts a move, and a circle entry but India launch an counterattack with Shamsher Singh on the ball. And it's half time.

A slender lead for India and they are pushing for more. India win a long corner from yet another move from the left. Manpreet Singh on the ball and gets a run in inside the D, but Ali Mubashar checks again.

The contest in Dhaka is fizzling out. Both sides happy rolling the ball around. Shilanand Lakra gets a free run inside the attacking third Ali Mubashar tracks him down and completes a squeaky clean tackle. Brilliant play.

Brilliant run down the left flank from young Afraz. He has the body and strength. But again, India on the mend. Nice defensive play from India. Nilam Sanjeep Xess gets a green card, though.

Mazhar Abbas lucky not to get overrun by Harmanpreet Singh in the middle. Pakistan, from the following play, get a move with Ali Shan. But the forward fails to make the circle entry. One of those plays again for Pakistan. Lacking that final touch.

After initial possession, a fleeting one, Pakistan lose possession. India launch an attack from the left with Jarmanpreet Singh on the move. And a loose cross. Suraj Karkera is now under the bar for India.

India take their chance and it's the difference now. One PC and one goal. Pakistan, always a better PC handling side, are yet to get one in this tournament.

Muhammad Hammadudin running like a lone raider. He fails to link up but India tidy at the back. Jarmanpreet Sing switches flanks, now operating from left. And hooter.

Harmanpreet Singh starts a move inside the attacking third and skipper Manpreet Singh takes over, feeding the ball to Shamsher Singh, who goes for a reverse. But Pakistan goalie makes a sensational block.

India change the gears. A diving Sumit takes control of the ball and sends in a cross but neither of the two Indian players at the second post manages to make contact. Golden chance to make it 2-0.

Umar Bhutta is back after serving his twp-minute suspension.

This Pakistan side is a different one from the ones that we have seen in the last few years. Disciplined one would say. Meanwhile, Sumit makes a good interception and helps launch an attack.

GOAL! And from the resulting PC, India draw first blood. Harmanpreet Singh makes it one. Nice injection and stop.

Pakistan captain Umar Bhutta and Ajaz Ahmad having some nice runs, laced with trickery. But India do well to win the ball in their half and happy to wait for their moment. It's a mid-field clash sp far.

Brilliant check from Muhammad Hammadudin to block Lalit Kumar Upadhyay just inside the D. India the dominant side so far.

India start the proceedings, right to left on your screen. Cagey start. India trying to make inroads from the left flank. Akashdeep gets a green card early in the match.

3:07 PM IST: India in their traditional blues, while Pakistan are wearing whites today.

2:56 PM IST: This will be a repeat of the last edition's final, which didn't happen after rain lashed Muscat. Here in Dhaka, chances of rain spoiling a hockey game is almost impossible.  Get ready for a wild ride.

India and Pakistan are unbeaten in the Asian Champions Trophy hockey competition in Dhaka so far. While India have split points with Korea, Manpreet Singh's team smashed hosts Bangladesh 9-0 in their second round-robin league match. A win on Friday will assure India a semifinal spot in ACT 2021.

Pakistan have so far played one match. They drew 0-0 against Japan. Bangladesh play Korea in Friday's other match.

The Asian Champions Trophy 2021 tournament is a five-nation, single-pool tournament. Malaysia were the sixth team in the championship but withdrew due to COVID-related issues.

India and Pakistan are the defending champions of the Asian Champions Trophy. In 2018, the arch-rivals shared the title after rain washed out the final in Muscat, Oman.

India won the bronze medal in Tokyo Olympics and will have some reputation to defend. Former Olympic and world champions Pakistan did not qualify for Tokyo 2020 and the Green Shirts are looking at redemption.

The last time India and Pakistan played each other was in the league stages of the ACT in 2018 where India won 3-1.