With this win, India have improved their NRR. The New Zealand vs Afghanistan match will decide which team joins Pakistan from the group in semis. 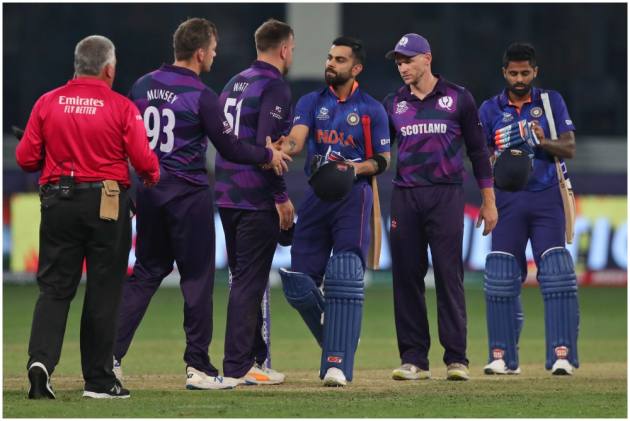 "Coming up against a side like India maybe just throws things into a new level, perhaps," said Kyle Coetzer, the Scotland captain. "The opportunity to try to test yourself against some of the best players in the world is really important for us, it's an important time for us, a phase in the Cricket Scotland journey, in terms of how we show what we do and show what we're capable of." These are dangerous words from an Indian point of view. Having given New Zealand a scare - they lost by 16 runs -- Scotland is keen to slug it out against India, whose tournament hopes are hanging by a thread. Virat Kohli's men not only have to win their remaining matches, but emerge victorious in such a way so that their net run-rate (NRR) stay right up there in case there is a tie on points. India need to chase Scotland's total in 8.5 overs to go past New Zealand's net run rate, and in 7.1 overs to go past Afghanistan's. India are fourth in the points table. They defeated Afghanistan in their last match after the humiliation against Pakistan and New Zealand. Indian openers KL Rahul and Rohit Sharma came good against Afghanistan, who looked out of sorts with their bowling. India are unlikely to tamper with their playing XI after Ravichandran Ashwin assured that he was the man for the occasion ahead of an injured Varun Chakravarthy. India have batted first in all of their games so far, and had the worst of the dew while bowling in the second innings. The dew factor could come into play again in Dubai tonight. It's Virat Kohli's birthday today and he has lost 13 out of last 14 tosses for India. This is the first T20 international between India and Scotland. Follow live scores of IND vs SCO here.

Virat Kohli (IND): It will be interesting to what happens on 7th (November). We went inside with a mindset of restricting them for 110-120 max. The bowlers did well and then KL and Rohit batted like no other.

Ravindra Jadeja (Player of the Match): The first wicket was special. Whenever you get a batsman out with a turning ball, that's always special. Everybody knew we had to win big to up our net run-rate. One more game to go and hopefully we play like this.

For India to go into the last four stage, they need a favour from Afghanistan. Afghanistan (4 points) will need to beat New Zealand (8 points) and India must win against Namibia to see Virat Kohli's men join Pakistan from the group into the knockouts.

With this win, India rise to the third spot with an NRR of +1.619. Both New Zealand (+1.277) and Afghanistan (+1.481) have NRRs below India. It all boils down to the match between Afghanistan and New Zealand on Sunday which will determine the second team from the group to semifinals.

And it's all over in Dubai. India chase down Scotland's target of 86 in 6.3 overs, to improve their NRR. Suryakumar Yadav finishes with a big six.

KL Rahul departs but not before hitting the fastest fifty of the tournament in 18 balls. India 82/2 (6)

Wonder where was this Indian batting against Pakistan and New Zealand! Two more fours and six in the fifth over. Meanwhile, Rohit is out, LBW.  KL Rahul (39*) and Rohit Sharma (30). India 70/1 (5)

Fifty up for India with two fours and six off Saafyan Sharif in the fourth over. This is the quickest India have reached 50 runs in a T20 international.  India 53/0 (4)

Huge over for India as KL Rahul means business from the word go. He hits Bradley Wheal for three boundaries in an over to take India to a brisk start. KL Rahul (15*) and Rohit Sharma (7*). India 23/0 (2)

A four in the first over from Rohit Sharma to start the proceedings. India 8/0 (1)

What India need to do for better NRR?

That's it. Scotland are bowled out for just 85 in 17.4 overs. Jasprit Bumrah finishes off in style with the wicket of Mark Watt, clean bowled for 14. Bumrah also becomes India's highest wicket-taker in T20 internationals. He gets past Yuzvendra Chahal's tally of 63.

Another one goes down for Scotland. Shami shatters Callum MacLeod's stumps with a perfect yorker. He departs for 16. India get another in the next ball as Safyaan Shari is run out first ball.  Wait Wait! There is another. Shami clean bowled Alasdair Evans with a toe crusher. Three wickets in three balls for India. Scotland 81/9 (16.3)

Unlike the previous matches, Scotland's approach against India have been pretty positive. The batters didn't capitalise on the starts but the aggressiveness stood out for them. Scotland 81/6 (16).

Another success for India as Chris Greaves hits straight to the hands of Hardik Pandya at long-off. Ravi Ashwin is the lucky bowler. Scotland 64/6 (14)

And the big man is gone. Ravindra Jadeja comes into attack against and traps Michael Leask in front for 21. Huge breakthrough for India. Scotland 58/5 (11.2)

Continuing his form from the last match, Michael Leask hits Mohammed Shami for a boundary and a six to take 13 runs off the over. Scotland 57/4 (11).

Some tight bowling from the Indian spinners. 15 runs coming in the last three overs as Scotland reach 44/4 after 10 overs. Calum MacLeod (6*) and Michael Leask (10*) are currently at the crease.

Two in an over for Ravindra Jadeja. He clean bowled Richie Berrington first before trapping Matthew Cross in front for an LBW. Scotland in trouble. Scotland 29/4 (7)

A wicket maiden to start for Mohammed Shami. He sends Munsey back before almost getting another in the final ball. Scotland finish the powerplay at 27/2. Incidentally, the other scalp was also wicket maiden from Jasprit Bumrah.

Shami does the trick for India. He forces George Munsey to hit straight to Hardik Pandya at mid-on. Scotland 27/2 (5.2). Munsey goes for 29.

Geroge Munsey is taking on the Indian bowlers. The left-hander hits three back-to-back boundaries off Ravi Ashwin to set the pace for Scotland.  Scotland 25/1 (4)

The wicket that India wanted. Jasprit Bumrah bowls full and slow, Kyle Coetzer tries to drive the ball only to drag it onto his stumps.  Scotland 13/1 (3). Wicket maiden for Bumrah.

Munsey is playing some serious cricket against India. The left-handed opener hits another four off Varun Chakravarthy to give Scotland a good start.  Scotland 13/0 (2)

What a shot that was from George Munsey. Jasprit Bumrah bowls in his legs and Munsey flicks for a huge six. Top class! Scotland 8/0 (1)

India have made one change in their side. Shardul Thakur misses today's game and is replaced by Varun Chakravarthy. Scotland go unchanged.

India have won the toss and will bowl first. Some luck for the birthday boy.

In case Afghanistan beat New Zealand on Sunday and India win both against Namibia and Scotland, it will have three teams -- India, New Zealand and Afghanistan -- on six points each. The NRR will then decide who makes it alongside Pakistan in the semifinals.

With New Zealand winning against Namibia, the Kiwis move to second spot above Afghanistan with six points. Even if India win today against Scotland, they need to win big to topple Afghanistan to third spot bettering their NRR. In that case, the New Zealand vs Afghanistan encounter on Sunday will be the most-awaited match in the competition that decide who goes to semifinals.

Hello and welcome to this crucial India vs Scotland Super 12 encounter in the T20 World Cup. It's a must-win match for India after having lost their first two games to Pakistan and New Zealand. Although they won against Afghanistan, chances of India making the semifinals are very rare.