After restricting Ireland to 125/8, Namibia chased down the target in 18.23 overs. Catch highlights of ICC T20 World Cup, NAM vs IRE Group A match. 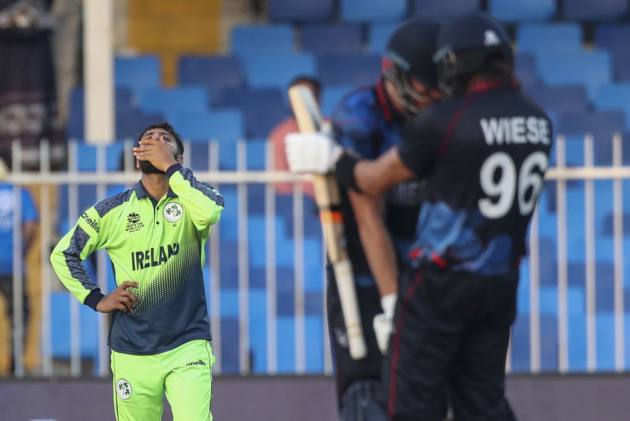 Namibia on Friday became the 12th and final team to book a Super 12 spot of the ICC T20 World Cup 2021 with a big win against Ireland. In their final first-round, Group A match, Namibia chased down a target of 126 runs in 18.3 overs to register an eight-wicket win in Sharjah, UAE. Namibia thus joined Bangladesh, Scotland and Sri Lanka from the first round to Super 12. Man of the match, David Wiese hit the winning runs, a four to Craig Young to send his teammates to a frenzy. He remained unbeaten on 28 off 14, and was involved in an unbeaten 53-run stand with skipper Gerhard Erasmus, who played a captain's knock (53 not out off 49). Earlier, Ireland skipper Andrew Balbirnie won the toss and elected to bat. But, despite a good start from openers Paul Stirling (38 off 24) and Kevin O Brien (25 off 24), they managed only 125/8. Jan Frylinck took three wickets for Namibia. Former champions Sri Lanka became the first team to qualify for the tournament proper from the group. They take on an already eliminated Netherlands in the final first-round match. Catch highlights and cricket scores of the NAM vs IRE match here:

Craig Young with the penultimate over. Gerhard Erasmus hits the first ball for a four, and fifty for the skipper in 48 balls. A single, then David Wiese hits a four to wrap up. An eight-wicket win and Namibia complete the Super 12.

What an over. Ball travelling at 128 km per hour and it doesn't do anything. Well, Ireland take a review for caught behind. Last resort! Nothing, only the spike of ball brushing the wicket. David Wiese survives. Before that Wiese hits Craig Young for two sixes off the second and third balls. 16 from the over. NAM - 93/2 (15)

Mark Adair fails to complete his second over after the fourth over. Cramp. Kevin O Brien takes over. Six from the over as Zane Green hits the fifth for a four. NAM - 33/1 (7)

Stunning catch. A leaping Kevin O Brien takes a beauty at mid-on to send Craig Williams (15 off 16) back. Wicket for Curtis Campher. Gerhard Erasmus is the new batter. NAM - 25/1 (5.1).

Joshua Little continues. Six from the over, including two wides. In the previous over, Craig Young conceded four runs, a boundary hit by Craig Williams off the fourth. NAM - 11/0 (3)

Joshua Little with the first over. Craig Williams takes the strike. Three dots, then a single to third man. Then two more dots to Zane Green. One from the over. Target - 126.

Another good over for Namibia. Ruben Trumpelmann with his third and six from it. In the previous over, David Wiese leaked only one. IRE - 101/3 (16)

JJ Smit with his third over. Two singles and a double from it. Andrew Balbirnie and Gareth Delany struggling to score freely. IRE - 88/2 (13)

Pikky Ya France on with his first over. Just three runs, including a wide. Five runs in two overs. 28 runs and two wickets in the last five as Namibia pull things back against Ireland in Sharjah. IRE - 71/2 (10)

Bernard Scholtz on with his second over. And he gets the big wicket of Paul Stirling (38 off 24), caught at long on by a sliding Nicol Loftie-Eaton. Andrew Balbirnie is the new batter. IRE - 62/1 (7.2)

Jan Frylinck gets his first over. 12 from it with Kevin O Brien hitting the first and fourth balls for fours. IRE - 55/0 (6)

JJ Smit with this first over.  Paul Stirling hits the second ball for a six, over long on. 11 from the over. In the previous over, David Wiese conceded six, including a four off the fourth ball, hit by Stirling. IRE - 20/0 (3)

Ruben Trumpelmann with the first over. Paul Stirling takes a single off the first ball. Two dots to Kevin O Brien. A single, and a wide, then another dot to end the over. Three from it.

Ireland win the toss and they will bat first against Namibia.