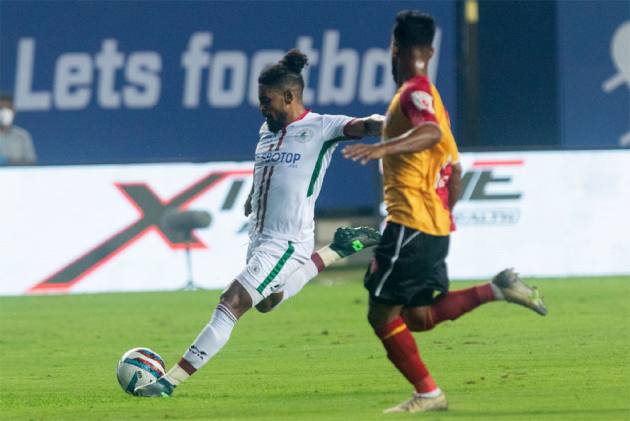 It proved to be yet another one-sided Kolkata derby. ATK Mohun Bagan produced a clinical performance to humble their eternal rivals East Bengal 3-0 at Tilak Maidan, Vasco on Saturday. The win helped Antonio Habas' men set the early pace in the Indian Super League (ISL) 2021-22. Two wins in two, with seven goals. Roy Krishna, Manvir Singh and Liston Colaco scored three goals in the first half and defended vigorously towards the end to take all three points. Catch highlights of the East Bengal vs ATK Mohun Bagan match here:

90+4' - Manvir Singh gets a free run on the right flank and he releases one for David Williams and the Aussie hits wide. That's the last action of the match.

88' - Another sub for ATK Mohun Bagan. Ashutosh Mehta in for limping Deepak Tangri.

87' - Back-to-back chances for ATK Mohun Bagan. Roy Krishna gets a run but is Adil Khan reads it. A quick corner and Krishna feeds Joni Kauko, but the Finn shoots wide.

85' - Antonio Perosevic in action. The Croatian wins the ball and sends in one for Daniel Chima Chukwu. But the Nigerian misses it.

83' - Silly yellow card for Antonio Perosevic. East Bengal frontman fails to break the off-side trap and kicks the ball away in frustration. And is booked.

80' - A rare loose ball from Joni Kauko. He floats one and lands deep inside East Bengal box. From the following play, a sliding Pritam Kotal beats Antonio Perosevic to the ball. Throw in for East Bengal.

77' - Liston Colaco out and Prabir Das in for ATK Mohun Bagan. Soon after the restart, ATKMB win a corner and East Bengal goalie Suvam Sen clashes with one of his defenders.

73' - Deepak Tangri is struggling. Hobbling and waiting for the ref to allow him to join the play. Meanwhile, a decent press from ATKMB but David Williams ends the move with a skier.

71' - New man David Williams is caught off-side on the counter. And another move for East Bengal. A long ball and Antonio Perosevic fails to keep the ball in play. Goal-kick for ATKMB.

69' - Nice little spell for East Bengal. A cross from left fank and Md Rafique tries to be cute with his right foot but misses the near upright. But still a fine team play from East Bengal.

67' - East Bengal win a free-kick in the attacking third. Amrinder Singh does well to punch away the ball. And first sub for ATK Mohun Bagan. David Williams in for Hugo Boumous.

64' - A defense splitting pass and Roy Krishna gets a run. He's beaten by onrushing Suvam Sen to the ball.

60' - In a bid to win a high ball against Amarjit Kiya, Deepak Tangri leaps high and takes a nasty tumble. He's getting medical attention.

Moments ago, East Bengal made another sub. Daniel Chukwu is for Darren Sidoel.

58' - A crossfield ball and Manvir Singh goes for the far post from the left, and he misses. He's not happy for some reason.

54' - A decent move from East Bengal with Bikash Jairu releasing a teasing cross. But easy for Amrinder Singh under the bar. And Raju Gaikwad needs a breather. He is replaced by Adil Khan.

49' - Dutchman Darren Sidoel wins one on one in the attacking third but fails to keep the ball in play. Rare move from East Bengal wasted. Moments ago, Roy Krishna released one for Manvir Singh, but the Indian overcooked his move.

46' - Substitution during the break. Tomislav Mrcela makes way for Amir Dervisevic as East Bengal look for a new man upfront.

8:35 PM IST: Players are back for the second half. East Bengal need a miracle to overturn the three-goal deficit.

Three goals in 11 minutes, including a gift from Arindam Bhattacharya, means East Bengal are playing a chasing game against a dominant ATK Mohun Bagan side in the season's first Kolkata derby. Roy Krishna opened the scoring in the 12th minute with a confident finish, then Manvir Singh doubled it in the 14th minute. Liston Colaco made it 3-0 in the 23rd minute thanks to a goal-keeping error. Antonio Lopez Habas' men, as always, gave little importance to ball possession and at times even resorted to long balls. In fact, one such long ball forced Arindam Bhattacharya to make an error resulting in the third goal. To their credit, Manolo Diaz's East Bengal started the match sprightly, but they somehow failed to keep the momentum. Joni Kauko ran the show with some brilliant moves in the midfield. The experienced Finn got ample support from Hugo Boumous, who looked more than happy to play a supporting role to goal-hungry Roy Krishna. Also, Subhasish Bose and Pritam Kotal were brilliant on the flanks.

45+6' - East Bengal enjoying a little spell towards the end. Antonio Perosevic goes for a left-footed drill but is sails over the bar. That's the final play of the half.

44' - Subhasish Bose is having a free run. He sends one for Roy Krishna. But the Fijian fails to shoot after chesting the ball. Four minutes added on.

41' - ATK Mohun Bagan using the full width to launch attacks from the back. East Bengal doing very little to challenge the ATKMB play. Out of moves, out of means.

38' - Another long ball and brilliant control from Hugo Boumous to keep the ball on the run. The Frenchman however fails to link up with another ATK Mohun Bagan player and sends his cross wide. Joni Kauko little slow to make the move.

28' - A flurry of attempts from ATK Mohun Bagan. Roy Krishna goes for another goal and this time Arindam Bhattacharya is up to the challenge. Seconds later Joni Kauko goes for the right side and misses the target.

26' - Another yellow card for East Bengal. Darren Sidoel is booked for a late challenge on Hugo Boumous.

23' - GOAL! Horror show from Arindam Bhattacharya and East Bengal. A long ball on the left flank and Arindam leaves his line going for the ball but loses the fight to Liston Colaco. And easy for Colaco. A fine finish. Colaco first keeps the ball in control on the byline and slots in from a very tight angle.

18' - It's one-way traffic. ATK Mohun Bagan toying with East Bengal. Another move and appeal for a penalty. But Rahul Kumar Gupta sees no foul inside the East Bengal box. Joyner Lourenco lucky not to concede one after bringing down Liston Colaco. It would have been a soft one though.

14' - GOAL! Two in two minutes for ATK Mohun Bagan. Joni Kauko releases a brilliant through ball and Manvir Singh produces a fine finish to beat Arindam Bhattacharya. A right-footed drill from just inside the box.

12' - GOAL! And that man does it again. Lovely team goal. Pritam Kotal gets a free run on the right flank and sends in a cross for Roy Krishna, who beats Arindam with a fine flick. It's ATK Mohun Bagan lead.

10' - First real chance of the game. Roy Krishna goes for a long ranger and is blocked by Arindam Bhattacharya.

6' - First booking of the match. Sliding tackle with a very high boot from East Bengal's Lalrinliana Hnamte. Lucky to get only a yellow card.

National anthem done. ATK Mohun Bagan captain Pritam Kotal wins the toss and chooses the side. East Bengal, in red and gold, will start. They will attack from the left. Bagan are in all whites.

ATK Mohun Bagan started the season with a 4-2 win against Kerala Blasters. Hugo Boumous scored a brace while Roy Krishna and Liston Colaco scored a goal each. East Bengal played out a 1-1 draw with Hyderabad FC.

East Bengal look to put their ISL 2021-22 campaign back on track and the motivation to do better than last year can start with the famous Kolkata derby against ATK Mohun Bagan tonight.

East Bengal suffered from administrative issues last season and even Liverpool legend Robbie Fowler's presence as head coach had no impact on the team's performance. East Bengal have a new coach this season but they have been below par.

No wins in their last five competitive matches is a fair indication of East Bengal's predicament and it remains to be seen if the red and golds find some extra motivation in a match where results are not only dependent on skills but also the mental toughness of the players.

Last year's runners-up ATK Mohun Bagan look settled and they have started with a win in the ISL this season. ATKMB have won three out of their last five matches. This includes the AFC Cup 2021 and the only defeat came against Uzbek team Nasaf FC, a vastly superior professional side.

Mohun Bagan started with an emphatic 4-2 win against Kerala Blasters this ISL season. East Bengal drew 1-1 with Jamshedpur FC. But like all Kolkata derbies, the past will have no impact on the present and the EB vs ATKMB clash promises to be a thriller.