Indian women declared their second Innings at 135/3 to force a decision on the fourth and final day of the one-off Test. Follow live cricket scores of AUS-W vs IND-W. 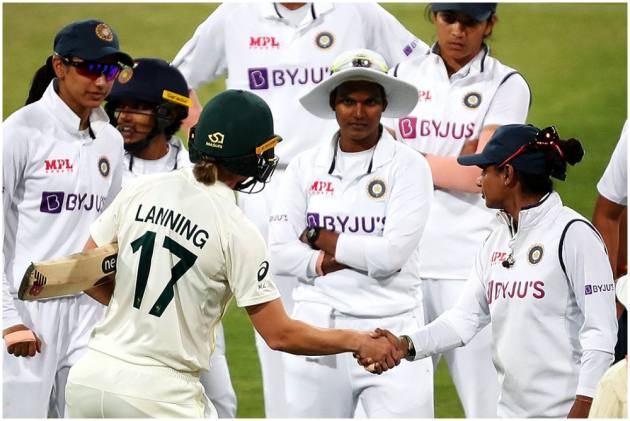 The one-off pink ball Test between Australian women vs Indian women at Gold Coast may be heading for a draw but India have definitely looked the better side in this historic game. Smriti Mandhana's century enabled India to declare the innings at 377 for eight, the highest by a touring team in Australia. And then by close of play on Day 3 on Saturday, the hosts had lost four wickets for 143, still needing another 85 runs to avoid the follow-on target of 228. Indian women can claim to be the moral victors of this Test match where much of it was lost to the Queensland weather. A result is unlikely on the fourth and final day and although more than 100 overs are scheduled, the hosts will ensure they don't lose 16 wickets on a pitch that looks good for batting. India's aggressive intent was impressive as pacers Jhulan Goswami and Pooja Vastrakar picked up two wickets apiece on Day 3. They have to show the same intent again as India look to extend their unbeaten streak in Tests to six. Follow live cricket scores of AUS Women vs IND Women here.

Meg Lanning (AUS): The weather played the s\poilsport. Had there been no rains we would have got a result. I think India played really well. We fielded every day of this Test, so we spent a bit of time out there.

Mithali Raj (IND): Had we got four more wickets we would have gone for fa ew more overs. Jhulan has always been my best bowler for so many years. Smriti Mandhana played brilliantly, really impressed with Yastika in the series.

Smriti Mandhana (PoM): This hundred will remain in the top three. It's our first time playing in a Day-Night Test match and I am really happy that I gave good pace (start) to the team. Was Lucky with that no ball on 80 on the second day.  We just have three days before the T20s. Rest for a day and get back to business with the T20s coming up.

The match will be remembered for Smriti Mandhana's Test century in the first innings and Jhulan Goswami with the ball. There were others who also chipped in.  For Australia, it has to be Ellyse Perry rescuing them with the bat. Smriti Mandhana has been named as Player of the Match. Since the game ended in a draw - both teams get two points each. So in this multi-format series, Australia lead India 6-4 at the moment.

That's the end. The historic one-off pink-ball Test match between India women and Australia women ends in a draw, thank to rain Gods in the first two days. Mithali Raj and Meg Lanning have a chat and players shake hands. Two legends of the game - Ellyse Perry and Jhulan Goswami have a long chat.

Goswami strikes. Like in the first innings, the veteran pacer once again dismisses Alyssa Healy, this time for just 6. Beth Mooney and Meg Lanning are batting at 5 each. Australia 16/1.

There is the declaration from  India. Mithali Raj declares with India at 135/3. Australia need 272 runs to win in 34 overs. Nice gesture from Ellyse Perry too as she gives the match ball to Georgia Wareham to keep as a souvenir for her first Test wicket.

Final session play is going on. Once again it's young Shafali Verma and Smriti Mandhana who forged a 70-run opening wicket partnership. Shafali departed for a well-made half-century (52), Smriti Mandhana managed to get 31. Debutant Yastika Bhatia (3) was the third India batter to be dismissed. Deepti Sharma and Punam Raut at the crease. India 129/3, leading by 265 runs.

Just like in the first innings, Indian openers Shafali Verma (18*) and Smriti Mandhana (16*) started on a strong note with a flurry of boundaries in the second innings. Both batters are hitting the ball well. India 38/0, lead by 174 runs.

Message in from the skipper, Meg Lanning declares with Australia at 241/9. Dinner has also been announced. India take 136 run lead.

Australia lose two more wickets in the form of Georgia Wareham and Sophie Molineux. Debutant Darcie Brown is in the middle with Ellyse Perry. Meanwhile, Australia have reached the follow-on mark of 228 runs. India will have to bat again. Australia 230/8, trail by 147 runs.

India have finally broken the partnership with Deepti Sharma accounting for Ashleigh Gardner (51) soon after the Australian brought up her half-century. Ellyse Perry too notched up her third Test fifty. A new ball has been taken. Australia 210/5, still trail by 167 runs.

With no proper result likely in the one-off historic day-night pink ball Test match, the Australians would like to make most of the pitch conditions and bat as long as possible. Ellyse Perry, who became the only woman to have 300 wickets and 5000 runs at the international level on Saturday, is also expected to push hard for her third Test century on Sunday.

The Australians are looking in good nick with both overnight batters Ellyse Perry (45*) and Ashleigh Gardner (35*) Tahlia McGrath negating the Indian attack. Like Day 3, the weather looks clear on the final day today and fans can expect a full day here at the Carrara Oval. Australia  183/4, trail by 194 runs.