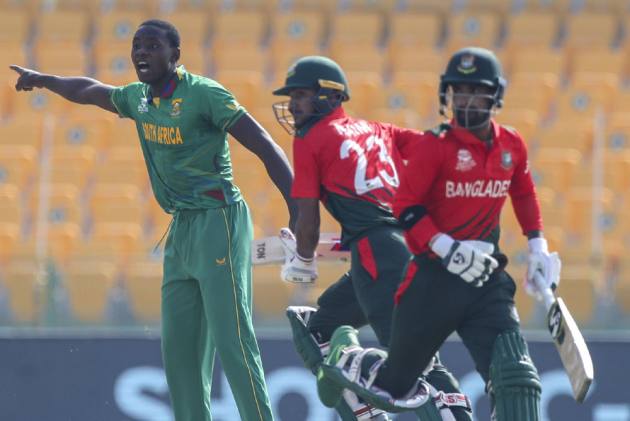 South Africa hammered Bangladesh by six wickets with 39 balls to spare in their Super 12 match of the ICC Men's T20 World Cup 2021 match in Abu Dhabi, UAE on Tuesday. The win, third in four outings, kept Temba Bavuma & Co in contention for a semi-final place. The Proteas are now second in Group 1 behind pace-setters England, who have won their four matches so far. Australia, with two wins in three, are third. Bangladesh are out of the tournament. Bavuma won the toss and opted to bowl first. And his pacers set the stage on fire with Kagiso Rabada (3/20) and Anrich Nortje (3/8) taking three wickets each. Mahedi Hasan (27 off 25) top-scored for the Tigers. Chasing a paltry target of 85, South Africa lost Reeza Hendricks in the first over to Taskin Ahmed, then Quinton de Kock to Mahedi Hasan. Bangladesh, giving their best, got another, with Taskin removing Aiden Markram for a duck. But  Bavuma played a measured knock of 31 off 28 to take the Proteas home in 13.3 overs. South Africa take on England in their final group match in Sharjah on November 6. Winless Bangladesh play their final match on November 4, against Australia in Dubai. Catch highlights of South Africa vs Bangladesh here:

Taskin Ahmed completes his spell. Three dots to Temba Bavuma, then a four off the fourth through cover. And to more dots. Ahmed's figures: 2/18. SA - 41/3 (8)

Taskin Ahmed on with his third over. Four byes off the fourth ball, then the wicket. Edge and is taken by Mohammad Naim at slip. Markram goes for a four-ball duck. Temba Bavuma is the new man. SA - 33/3 (6)

Mahedi Hasan gets his first over. Quinton de Kock hits back-to-back fours off the second and third balls. Hasan then responds in style. Cleans up the left-handed batter. De Kock goes for 16 off 15. And the 22-run stand is broken. SA - 28/2 (4.5)

Taskin Ahmed with the new ball. A wide to start, then a single. Two dots, then Reeza Hendricks dismisses the overpitched delivery for a four, through extra cover. A dot, then LBW. Hendricks goes for 4 off 5. SA - 6/1

Anrich Nortje on with his final over. And his second wicket. Mahedi Hasan (27 off 25), who hit the first six of the innings in the previous over, is out, caught & bowled. Shoriful Islam is the new man. And Nortje cleans up the last man, Nasum Ahmed (hit wicket). Nortje's unfinished spell read: 3/8 in 3.2 overs. Bangladesh all out for 84 in 18.2 overs.

And there's a run out too. Taskin Ahmed plays the second ball to extra-cover and sets off for a suicidal run. Temba Bavuma hits the target at the bowler's end. Ahmed goes for 3 off 5. BAN - 77/8 (17.2)

Tabraiz Shamsi returns for his third over. Shamim Hossain takes a couple off the first ball, and holes out next. Keshav Maharaj takes an easy catch at long-on. Hossain goes for 11 0ff 20. Taskin Ahmed is the new man. BAN - 64/7 (15.2)

Dwaine Pretorius on with his second over. Four from it. 16 runs in the last 30 balls, and no boundaries in the last seven overs for Bangladesh. BAN - 40/5 (10)

Anrich Nortje gets his first. A well-directed bouncer to Mahmudullah and the Bangladesh skipper fails to fend off. Caught at point by Aiden Markram. Mahmudullah reviews and is wasted. He goes for 3 off 9. BAN - 34/4 (8)

Kagiso Rabada misses out on a hat-trick, but gets his third wicket in five balls. Mushfiqur Rahim (0 off 3) caught by Reeza Hendricks. Some juggling at the slip, but a clean one. Mahmudullah is the new man for Bangladesh, and he joins Liton Das in the middle. 24/3 (5.3)

Two in two for Kagiso Rabada. Mohammad Naim (9 off 11), caught by Reeza Hendricks at midwicket off the fifth ball. And the pacer traps the new man, Soumya Sarkar in front for a first-ball duck. BAN - 22/2 (4)

Keshav Maharaj with the new ball. Mohammad Naim takes a single off the second ball, then a double off the fourth as Liton Das plays it to mid-on. A single to end the over. Four from it.

South Africa are unchanged. A couple of changes for Bangladesh. Shamim Hossain in for injured Shakib Al Hasan, and Nasum Ahmed in for Mustafizur Rahman.

South Africa win the toss and they will bowl first against Bangladesh.