Tom Latham (50 not out) and Will Young (75 not out) showed great courage to not lose a wicket against a formidable Indian bowling attack in reply host's 345 all out in the first innings in Kanpur. 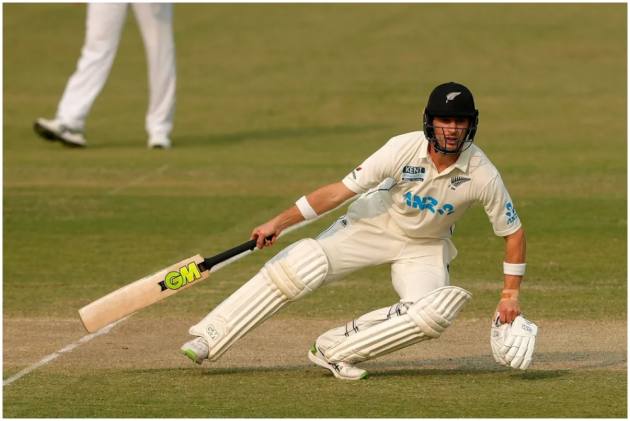 Day 1 of the first Test between India vs New Zealand belonged to Shreyas Iyer. The Mumbai man did complete justice to his Test debut and took India to the shores of safety after the hosts suffered a mini-collapse of sorts after opting to bat at Kanpur's Green Park. Day 2 belonged to Iyer, Tim Southee, Will Young and Tom Latham. Starting on overnight 258/4, Iyer's maiden century and a useful 38 from Ravi Ashwin helped India finish at 345 all out, thanks to Tim Southee's 5/69. He also became the first overseas player since 1980 to take a fifer at Kanpur. Thereafter it was all Young and Latham. Not only they negate the Indian bowling attack but also made sure New Zealand don't lose a wicket on the day as the Kiwis finished at 129 without loss.  For India, they need to break this partnership as soon as possible on Day 3 to have a chance in the match

If Tim Southee's fifer and Shreyas Iyer's maiden Test century hogged the limelight in the morning session, it was Will Young and Tom Latham for the rest of the day. Young and Latham will start Day 3 on individual scores 75* and 50* respectively. Bad light stopped play on Day 2.

50 from Tom Latham. Absolute class from the left-hander. His 21st fifty comes in 157 balls.

Ravichandran Ashwin replaces Ishant Sharma. In the previous over, Tom Latham hit Ravindra Jadeja for a four off the third to complete a century opening stand (101 off 238) for Will Young (64 off 131) and Latham (34 off 112),  first for a visiting team in India since Eglish openers Alastair Cook and Haseeb Hameed in 2016. New Zealand trail by 243 runs. NZ 102/0 (40)

Will Young gets a thick edge off Umesh Yadav for his fifty. Spectacular display by the Kiwi. New Zealand 89/0

Tea break. New Zealand have been brilliant so far. Will Young and Tom Latham have negated the Indian bowling attack very well so far with occasional boundaries to keep the run flow in check. New Zealand 72/0

The Indians have been on the money right from the start of the New Zealand innings. While Ishant Sharma and Umesh Yadav kept things tight, Ravi Ashwin and Ravindra Jadeja are doing the job currently. Will Young and Tom Latham are currently batting 23 and 10 respectively. New Zealand 35/0

Tom Latham hits the first boundary for New Zealand, hits towards the backward point for a boundary, off Ishant Sharma. NZ 8/0

Ajaz Patel polishes of the tail as India are all out for 345. Patel dismisses Ravi Ashwin and Ishant Sharma. Ashwin scored 38.

At lunch, India are 339/8 with Ravi Ashwin batting on an unbeaten 38. Umesh Yadav is not out on 4. Tim Southee takes a fifer.

Everybody knows what Ravi Ashwin can do with the bat lower down the order and that is simply what the Tamil Nadu spinner is currently doing against New Zealand. Ashwin also has two Test centuries to his name. India 321/8. Umesh Yadav should try to give Ashwin (31*) as much strike as possible

Tim Southee becomes the first visiting bowler to take a fifer at Kanpur since Jan 1980, when he dismisses Axar Patel for just 3. India 313/8

Shreyas Iyer's beautiful innings comes to an end. Looking to drive on the up, swinging delivery from Tim Southee, Iyer hits straight at the hands of Will Young at the cover for 105. India 313/8

Another one goes down for India. Wriddhiman Saha's bad patch with the bat at the international level continues as he departs for 1. Ravi Ashwin joins Iyer in the middle. India 301/6

Maiden Test century for Shreyas Iyer. He pushes Kyle Jamieson for a two and raises his hands in celebration. The right-hander, starting the day on 75, has already hit five fours in the morning. What a game he is having.

New Zealand gets the breakthrough with Tim Southee doing the magic. Ravindra Jadeja chops onto his own stumps without adding to his overnight score. He departs for 50. India 266/5

Meanwhile, former Australia Test captain Tim Paine has decided to step away from all forms of cricket for the time being.

Tim Southee starts the proceedings for New Zealand on Day 2. New Zealand have an LBW review for Ravindra Jadeja but height proved to be the factor. Maiden over to start the day.  India 258/4

The unbeaten 113-run fifth-wicket partnership between Shreyas Iyer and Ravindra Jadeja is India's fifth-best in Test cricket against New Zealand. Interestingly, the highest fifth-wicket stand for India against the Kiwis is between Rahul Dravid and Sourav Ganguly. They scored 182 runs in the 2003-04 series in Ahmedabad.

Today, Dravid is the head coach of the Indian national cricket team and Ganguly is the BCCI president. Iyer and Jadeja will be hungry to surpass the legendary duo at Green Park, which has been a fortress for Team India for over six decades. India will start day 2 on Friday at 258 for four wickets.

Shreyas Iyer and Ravindra Jadeja came together at a crucial time for India. India were reduced to 145 for four wickets halfway through the middle session but Iyer progressed to 75 not out and Jadeja was 50 not out. Play was called off owing to bad light with six overs remaining.

Most of New Zealand’s workload was shared in 45 wicketless overs by left-arm spinner Ajaz Patel, playing his 10th Test, and off-spinner William Somerville, playing his fifth. The debutant, batting allrounder Rachin Ravindra, bowled seven overs of left-arm spin. India are playing three specialist spinners (Jadeja, Axar Patel and Ravichandran Ashwin) and anything around 400 will be a formidable score.