Catch the highlights of the BWF World Tour Finals 2021 match between India's PV Sindhu and Korea's Au Seyoung in Bali, Indonesia. This was Sindhu's third final in this year-ending event. 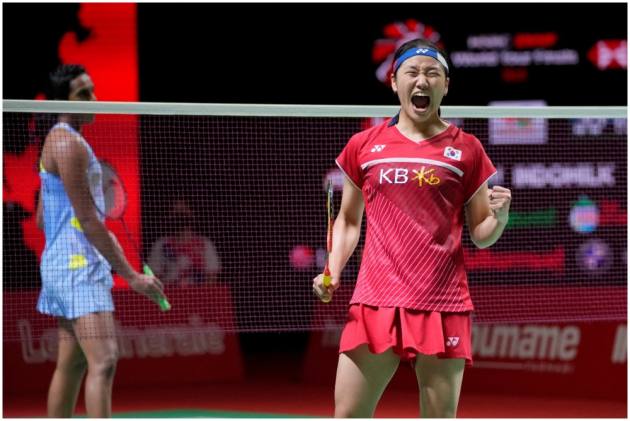 Another event and another runner-up finish for India's badminton queen Pusarla Venkata Sindhu. The Tokyo Olympics bronze medallist lost to Korean An Seyoung 21-16, 21-12 in 39 minutes in the summit clash of the BWF World Tour Finals 2021 in Bali. (More Badminton News)

The Korean was dominant from the word go and played with aggression in both games.  Sindhu on the other hand was a stark contrast to what she was while beating Akane Yamaguchi in the semis. Sindhu looked tired to be very honest. That aggression when she screams while winning a point went missing during the whole 39 minutes. Catch the highlights of the Sindhu vs Seyoung final encounter here. (Report)

An Seyoung has gotten better in the last three weeks. She has got better quality shots compared to before and looks all set to claim the title here. If she wins today, it will be three singles titles for the Korean in three weeks.

How on earth one can stop An Seyoung. She is fast, she is quick, she is technically right and she is young. Sindhu is having a hard time finding winners against the Korean.

Sindhu wins one and loses one in the challenge. Only one remaining for Sindhu. Scores level at 6-6.

A couple of nettings gives An Seyoung the lead in second game. Sindhu started the gam with two straight points.

Superb angled attack by Sindhu. Her height also gives her an advantage over the Koreas.

The Korean An Seyoung is unstoppable. She gets her reflexes on point and in total balance.

Two quick points fr Sindhu. But she is guilty of making unforced errors.

An Seyoung is clearly giving a hard time to Sindhu. The Korean has kept Sndhu busy with long rallies. Four straight points for An Seyoung. Sindhu needs to come back soon in the match.

What a start by the teenager. The Korean takes a 4-1 lead straightaway

Both players are ready. An Seyoung (in red) won the toss and she choose the far end of the court. An Seyoung to serve

Here comes PV Sindhu of India and An Seyoung from Korea. Play to start soon.

In mixed doubles, the Thai pair of Dechapol Puavaranukroh and Sapsiree Taerattanachai beat Japanese Yuta Watanabe and Arisa Higashino 21-19, 21-7 in the final.

Meanwhile, in women’s doubles, Koreans Kim Soyeong and Kong Heeyong beat Japanese pair of Nami Matsuyama and Chiharu Shida 21-14, 21-14 in the first match of the day.

Thailand Open – Round of 32

Hello and welcome to the live coverage of the  PV Sindhu vs Au Seyoung women's singles summit clash on the BWF World Tour Finals 2021 in Bali. It's a big say for the Indian and the World No. 7 is yet to win a title this year, baring Olympic bronze in Tokyo.

PV Sindhu is in good form at the Bali tournament. The top players in the world can beat each other any day. A lot depends on how they play on that particular day and how they react to situations. Sindhu has shown both skills and mental strength in Indonesia.

Sindhu's clinched a tough semifinal match against Japanese Akane Yamaguchi in the BWF World Tour 2021 Finals. Sindhu, the reigning world champion and two-time Olympic medallist, beat Yamaguchi 21-15 15-21 21-19 in a contest that lasted an hour and 10 minutes.

It remains to be seen how quickly Sindhu recovers from this semifinal played on Saturday and stays in shape for Sunday's final clash.

PV Sindhu's opponent on Sunday is an exciting Korean. An Seyoung is ranked sixth in the world (Sindhu is No. 7) and has a 2-0 win-loss record against Sindhu. In the semifinals in Bali, An Seyoung defeated Pornpawee Chochuwong of Thailand 25-23, 21-17.

In both previous encounters, An Seyoung has beaten Sindhu in straight games. Their most recent match was in the Denmark Open in October. The Korean girl beat Sindhu 21-11, 21-12. In the same tournament in 2019, Seyoung beat Sindhu 21-14 and 21-17.

So Sunday's match will be a grudge match for PV Sindhu, who win the BWF World Tour Finals title in 2018.