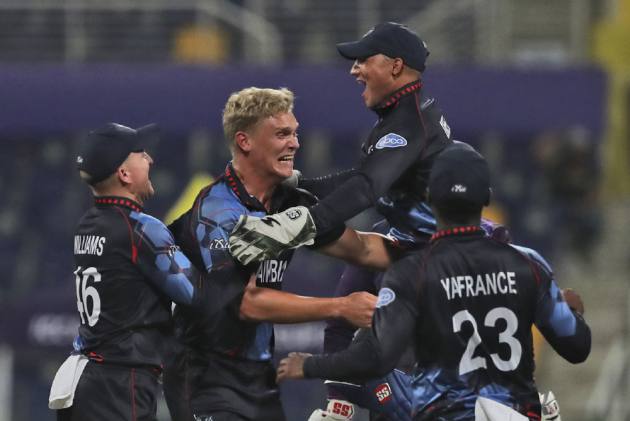 Namibia continued their dream run in the ICC Men's T20 World Cup 2021 with another thrilling win, this time against fellow Associate rivals, Scotland on Wednesday.  Playing their first Super 12 match, Namibia first restricted Scotland to 109/8 with Ruben Trumpelmann taking three wickets in the first over itself at Sheikh Zayed Stadium, Abu Dhabi. He was backed by fellow pacer Jan Frylinck, who took a couple of wickets for 10 runs. For Scotland, Michael Leask top-scored with 44 off 27. Namibia endured a wobble before reaching the target with five balls to spare. JJ Smit played an unbeaten knock of 32 off 23.  The win helped Namibia move to third place in Group 2, behind Pakistan and Afghanistan. India and New Zealand are the other teams in the group. Namibia next play Afghanistan on October 31, while Scotland face the Kiwis on November 3. Catch highlights and cricket scores of Namibia vs Scotland, Super 12 match here.

Bradley Wheal with the penultimate over. Jan Frylinck takes a single. Namibia, one hit away. A four for JJ Smit to deep extra cover. Two more. A single to mid on. Scores tied. And Frylinck hits straight to MacLeod at midwicket He goes for 2. Pikky Ya France is the new man. Two dots. Six runs from the over. Namibia need 1. NAM - 109/6 (19)

Mark Watt on with his third over. A dot, then a double to point. And one smart stumping by Matthew Cross to end Craig Williams' knock. Watt fires down the leg but Cross produces a neat work. JJ Smit joins David Wiese. NAM - 67/4 (12.3)

Mark Watt, left arm spinner, gets his first over. A dot, then a review for LBW against Zane Green. Another dot. Then, a double to deep wicket midwicket with George Munsey saving a boundary. A wide, then a single. Watt launches the last ball for a six, over long on. And fifty. Namibia need 60 runs in 66 balls. NAM - 50/1 (9)

Chris Greaves, legbreak, on with his first over. Zane Green scoops the first for a four, to fine leg boundary. And a huge shout for LBW against Craig Williams off the last ball. Decide not to take the review. Seven from the over. NAM - 40/1 (8)

Josh Davey with his second over. Craig Williams takes a single, then two dots. Michael van Lingen hits the next two for fours, to deep mid-wicket and long on respectively. 10 from the over. NAM - 26/0 (5)

Bowling change. Safyaan Sharif, right arm pacer, on. A shout for LBW against Michael van Lingen off the third, but ends up conceding one leg bye. Three runs from the over. NAM - 16/0 (4)

A single off the first, then four byes. One more single, off the fourth. Six from the first over.

Jan Frylinck with the penultimate over. He strikes first ball, Mark Watt (3 off 6), caught by Erasmus at long on. Josh Davey joins Chris Greaves. Three singles from the over. Frylinck's figures: 2/10. SCO - 102/7 (19)

David Wiese returns for his third over. Two singles, then a dot to Mark Wyatt. Three singles from it. Earlier, JJ Smit completed his spell for figures or 1/20. SCO - 99/6 (18)

Pikky Ya France, off-spinner, gets his first over. Michael Leask hits the fifth ball for a four to backward square leg boundary. A double to end the 8-run over. SCO - 92/5 (16)

Ruben Trumpelmann returns for final over. Chris Greaves hits the first ball a for a four, to square leg boundary. Two dots, then a run out chance. Direct hit from backward point, but Michael Leask survives at the striker's end. Six from the over. SCO - 84/5 (15)

Bernard Scholtz returns for his second over. Busy one. Chris Greaves sweeps the fifth for a four. 10 from the over. 39 runs and one wicket in the last five overs. SCO - 78/5 (14)

Bowling change. And Michael van Lingen concedes 14 in his first over, including a four and six off the last two balls, hit by Michael Leask. SCO - 57/4 (11)

David Wiese with his second over. A single, then Michael Leask hits the second ball for a four to mid-wicket boundary. Matthew Cross survives a LBW shout off the fourth. Seven runs from the over. SCO - 39/4 (9)

Bernard Scholtz, left arm spinner, on. Two singles, then a dot to Michael Leask. Another single, then a double to long on. A single to end the over. Six from it. SCO - 32/4 (8)

JJ Smit returns for his second over. A dot to Matthew Cross, then four singles. And a dot to end the over. In the previous over, new man Michael Leask hits David Wiese for a four off the fifth ball. SCO - 26/4 (7)

Ruben Trumpelmann continues. And first boundary of the match, to third man. Outside edge of Matthew Cross' bat and it beats the first slip. And three runs off the last ball as Cross plays it square, with some conviction. Eight runs from the over. SCO - 16/3 (5)

Ruben Trumpelmann continues. Four dots to Craig Wallace, then a single to square leg for his second run in nine balls. One leg bye to end the over. SCO - 6/3 (3)

Jan Frylinck, left arm pacer, shares the new ball with Ruben Trumpelmann. Craig Wallace survives a run out off the fourth ball. Two runs from the over. SCO - 4/3 (2)

What a start. Two wides later, Ruben Trumpelmann gets another. Two-ball duck for Calum MacLeod, caught by Zane Green. SCO 2/2 (0.3)

Namibia are unchanged. And one forced change for Scotland. Craig Wallace comes in for injured Kyle Coetzer (finger). Richie Berrington is leading Scotland today. Here are the playing XIs -

Namibia win the toss, and they will bowl first against Scotland.