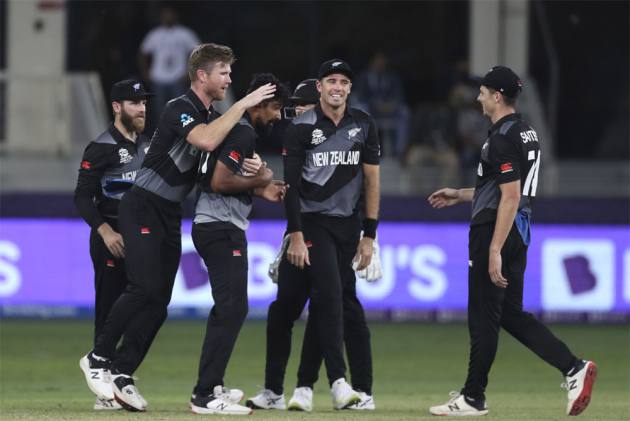 New Zealand did just enough to beat a spirited Scotland by 16 runs in their Super 12 match of ICC Men's T20 World Cup 2021 in Dubai, UAE on Wednesday. The win helped the Kiwis keep their semi-final hopes alive and they are now third in Group 2 table, behind already qualified Pakistan and Afghanistan, who are taking on India in the second match today. Afghanistan, India and New Zealand are in a direct fight for the second semis spot from the group, and the Kiwi win has put more pressure on Virat Kohli & Co. Kyle Coetzer returned to lead Scotland, and he opted to bowl first against unchanged New Zealand. But they ended up conceding 172 runs with Martin Guptill hitting 93 in 56 balls, with the help of seven sixes. Kiwis were struggling at 52/3 in 6.1 overs, but Guptill and Glenn Phillips (33 off 37) stitched a century stand to deflate the Scots. In reply, the Associate team got off to a decent start, but the lack of a big knock proved detrimental. Michael Leask played an unbeaten knock of 42 off 22 towards the end to keep their faint hopes alive. They ended up 16 runs short. Scotland are yet to win a Super 12 match. Kiwis next play Namibia in Sharjah on November 5, then Afghanistan in Abu Dhabi two days later. Scotland face India in Dubai on November 5, and Pakistan in Sharjah on November 7. Catch highlights of NZ vs SCO, T20 World Cup 2021 match here:

Ish Sodhi gets his second wicket. Richie Berrington gets a top edge off the fourth and is caught at short third man by Devon Conway. Easy take. Chris Greaves joins Michael Leask. Five runs from the over. Scotland need 65 runs in 24 balls. SCO - 108/5 (16)

Ish Sodhi continues. Five from his second over. In the previous over, his spin partner Mitchell Santner conceded four singles. SCO - 76/2 (10)

Ish Sodhi on with his first over. George Munsey hits back-to-back sixes off the third and fourth. Then holes fails to clear long-on with Tim Southee taking a brilliant catch. Richie Berrington is the new man and he takes a single. 16 from the over. SCO - 67/2 (8)

Adam Milne continues. Matthew Cross hits four fours on the trot. One more. And a dot. 20 from the over. Milne delivered a maiden over to Cross early. SCO - 48/1 (6)

Trent Boult continues. Kyle Coetzer hits the second ball for a four, through cover. A dot, then the wicket. A leading-edge and Coetzer is caught at mid on by Tim Southee. Scotland skipper goes for 17 off 11. Matthew Cross is the new batter. Eight from the over, including a four off the last ball, hit by George Munsey. SCO - 25/1

Trent Boult with the new ball. Kyle Coetzer hits the third and sixth deliveries for fours. Nine from the over. Target for Scotland - 173

Bradley Wheal on with the penultimate over. Wickets of successive deliveries. Glenn Phillips (33 off 37) holes out off the second ball at deep mid-wicket, taken by Chris Greaves. Then wicket of Martin Guptill (93 off 56), caught by Calum MacLeod at long on. James Neesham and Mitchell Santner are the new men. Neesham takes a single to deny Wheal a hat-trick. A four off the last ball as Neesham hits it to cow corner. Eight runs from the over. Wheal's figures: 2/40. NZ - 163/5 (19)

Bradley Wheal returns for his third ball. Martin Guptill hits the first ball for a six, over square leg boundary. 10 from the over. 50 runs in the last five overs. NZ - 120/3 (15)

Chris Greaves on with his second over. Martin Guptill hits the fifth ball for a four, behind point. Eight from the over.  34 runs and one wicket in the last five overs. NZ - 70/3 (10)

Bowling change. Mark Watt on and he gets the wicket of Devon Conway. The left-handed batter goes for an adventurous reverse sweep, but ends up losing his wicket. Good take behind the wickets by Matthew Cross. Conway goes for 1 off 3. Glenn Phillips is the new man. 52/3 (6.1)

Alasdair Evans continues. Martin Guptill hits the third ball for a four, over mid-on. And a six off the fourth after a wide, a powerful flick. 19 from the over. NZ - 52/2 (6)

Safyaan Sharif gets the wicket of Kane Williamson, caught behind. Faint nick as the Kiwi skipper goes for glance. He goes for a four-ball duck. Two wickets in four balls. Devon Conway is the new man. NZ - 35/2 (4.5)

Alasdair Evans with his first over. Martin Guptill hits the third and fourth balls for fours. Nine from it. In the previous over, Safyaan Sharif conceded a single. NZ - 23/0 (3)

Brad Weal with the new ball. Martin Guptill takes the strike. After two dots, he hits the third ball for a four, over extra cover for first runs. A single, and five wides, down the leg. Daryl Mitchell takes a double, to third man. A quick single to mid-on to end the over. 13 from the over.

Scotland win the toss and will bowl first against New Zealand.