After dismissing Oman for 122, Scotland chased down the target in 17 overs to register an eight-wicket win in their final ICC T20 World Cup, Group B match. Catch highlights here. 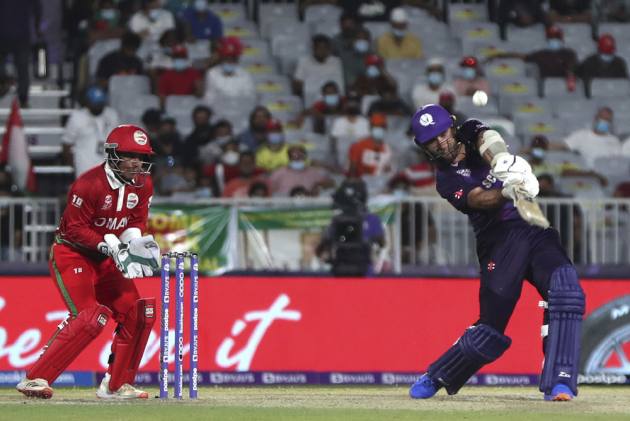 Scotland produced a clinical performance to maul Oman in their final Group B match of the ICC T20 World Cup 2021 in Al Amerat on Thursday. After dismissing Oman for 122, they chased down the target in 17 overs to register an eight-wicket win. The win helped Kyle Coetzer's side qualify for the Super 12 as winners of the group, ahead of Bangladesh who have earlier in the day booked a place for the tournament proper. Scotland will enter Super 12 as an unbeaten team from the first round, having previously defeated Bangladesh and Papua New Guinea. And they will compete in Group 2 which also has Afghanistan, India, New Zealand, Pakistan and Group B runners-up. Josh Davey, who took three wickets for 25 runs, won the player of the match award. Coetzer played a captain's knock with a fluent 48 off 28 balls. But it was Richie Berrington, who took the honours of hitting the winning runs, a six. The day started with hosts Oman still in contention for a Super 12 spot. But with Bangladesh hammering Papua New Guinea in the early kick-off, the clash against Scotland became a knock-out game. Then, they faltered when it mattered most. Opener Aqib Ilyas (37 off 35) and skipper Zeeshan Maqsood (34 off 30) played some blistering strokes but their collective effort was not enough to post a big enough total to intimate Scotland. The Scots were an inspired lot. Almost everyone contributed. And with that, the Oman leg also came to an end. Catch highlights and cricket scores of the ICC Men's T20 World Cup 2021, Group B match between Oman and Scotland here:

Mohammad Nadeem with his second over. Richie Berrington hits the fifth and sixth balls for a four and a six respectively to complete the chase. A thumping eight-wicket win with three overs to spare. SCO - 123/2 (17); OMN - 122 (20).

Scotland join Bangladesh in Super 12 from Group B.

Khawar Ali completes his spell. 15 from the last over, including two sixes, both hit by Richie Berrington. First one off the third ball goes some distance. Some 99 metres over long on boundary. Khawar's figures: 1/27. Scotland need 22 runs in 36 balls. SCO - 101/2 (14)

Zeeshan Maqsood returns for his third over. Four singles. Matthew Cross and Richie Berrington are unbeaten batters for Scotland. SCO - 86/2 (13)

Mohammad Nadeem gets his first over. Kyle Coetzer hits the fifth ball for a six, a real biggie, over mid-wicket boundary. Some 93 metres. Nine from the over. In the previous over, Khawar Ali conceded five singles. SCO - 72/1 (9)

First over for Oman skipper Zeeshan Maqsood. 12 from it with a six off the last ball, hit by his rival number Kyle Coetzer. SCO - 45/1 (6)

Bilal Khan continues. George Munsey hits the first ball for a four. Kyle Coetzer then hits the last ball over the mid-field fielder for a four. Nine from the over. In the previous over, Fayyaz Butt conceded eight runs. SCO - 20/0 (3)

Bilal Khan with the new ball. Three runs, including a wide. George Munsey and Kyle Coetzer are the openers for Scotland. Target - 123.

Josh Davey with the final over. Zeeshan Maqsood is finally out, for 34 off 30. Caught by Calum MacLeod. Bilal Khan is the new man. Three balls remaining. And Bilal is run out, for a duck. Khawar Ali is the new batter. Fayyaz Butt pulls the fifth ball and misfield at deep helps. A four. And straight to cover. Caught by Chris Greaves. Butt out for seven off five. Six runs and three wickets in the final over.  Davey's figures: 3/25. 28 runs and five wickets in the last five overs. OMN - 122.

Safyaan Sharif with the penultimate over. Zeeshan Maqsood hits the third ball for a six, over square leg boundary. Ten from the over. Sharif's figures: 2/25. OMN - 116/7 (19)

Michael Leask on with his third over. A dot, then two singles. A mistimed shot from Naseem Khushi and Brad Wheal takes a very good catch at long on. Khushi goes for two off four. Suraj Kumar joins Zeeshan Maqsood in the middle. OMN - 96/6 (15.4)

Safyaan Sharif returns for his third over. And all happening. Zeeshan Maqsood launches a skier, but an eager Kyle Coetzer drops the catch while it should have been the bowler's take. Maqsood hits the third ball for a four to third man. One leg bye, and Sandeep Goud picks Chris Greaves with a flick at square leg boundary. He goes for five off eight. Naseem Khushi is the new batter. 41 runs and two wickets in the last five overs. OMN - 94/5 (15)

Mark Watt gets his revenge. Mohammad Nadeem launches the second ball for a six, over long on, but ends up hitting the next straight to cover. Caught by Richie Berrington. He goes for 25 off 21. Sandeep Goud is the new man. OMN - 79/4 (12.3)

Bradley Wheal returns for his third over. Mohammad Nadeem hits the first ball for a six, over deep mid-wicket boundary. A single, then Zeeshan Maqsood hits the third for a four to long off. 13 from the over. OMN - 66/3 (11)

One busy over from Mark Watt. A couple of chances. First, Aqib Ilyas gets a four after getting a top edge off the second delivery at square leg boundary with the fielder overrunning in his bid to take a catch. Another top edge couple of balls later, and the fielder fails to time his jump. Six from the over. OMN - 50/2 (9)

Safyaan Sharif continues. Aqib Ilyas hits the fifth ball for a four to long off. Seven runs from the over. OMN - 37/2 (6)

Safyaan Sharif also strikes in his first over. Kashyap Prajapati (3 off 7), caught by George Munsey at mid-off. Mohammad Nadeem joins Aqib Ilyas in the middle. OMN - 14/2 (3)

Bradley Wheal with the new ball. Aqib Ilyas takes a single off the first ball, then wicket. Jatinder Singh (0 off 1), run out. Kashyap Prajapati is the new man. Ilyas hits the last ball for a six, over square leg boundary. Eight runs and a wicket.

Oman win the toss and they will bat first against Scotland.