South Korea ride on Jang Jonghyun's four goals to book their spot in the final of the Asian Champions Trophy hockey for men. Get highlights of PAK vs KOR first semifinal in Dhaka's Maulana Bhashani National Stadium. 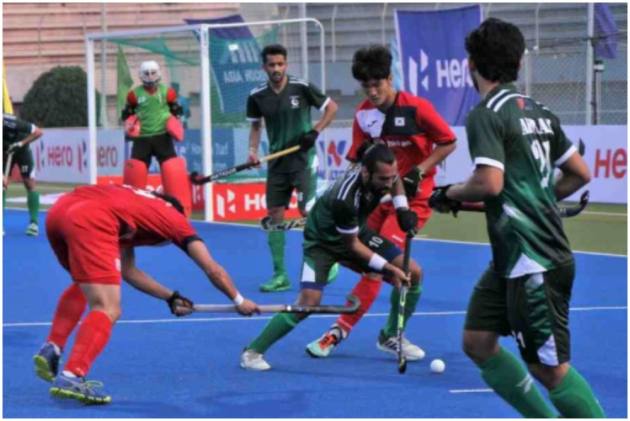 Asian hockey superpowers Pakistan and South Korea clashed in a thrilling first semifinal of the men's Asian Champions Trophy 2021 in Dhaka's Maulana Bhashani Nationa Stadium on Tuesday. Korea were the most dominant side winning the tie 6-5. Pakistan and India finished joint defending champions in the 2018 edition of the ACT in Muscat, Oman. Get highlights of PAK vs KOR here.

Pakistan captain Umar Bhutta says, "We played good but the two goals from the penalty strokes we conceded hurt us.

Jang Jonghyun of Korea is the man of the match for his four goals.

Korea enter the final with a 6-5 win. Credit must go to Jang Jonghyun for his four goals but Korean goalie Jaehyeon Kim deserves equal appreciation for denying Pakistan so many times. Certainly the two heros of the match.

Back-to-back penalty corners for Korea and they take the lead once again through Jang Jonghyun. He gets his fourth in the match.

Korea put back the pressure on Pakistan with two back-to-back hits but Amzad Ali does good work under the bar to let the ball in.

Jaehyeon Kim is playing a match of his lifetime. He denies Abu Bakar Mahmood once again and Korea keep the lead.

A defensive lapse from Pakistan's Mubashar Ali and Junwoo Jeong just had to beat Amjad Ali under the bar.

Pakistan lose another chance. The Pakistani forward goes for a pass instead of a direct hit and the Korean goalie saves. Ahmad Nadeem yells to his teammate for not taking the direct hit.

Korea could have got the lead but a long pass fails to get any touch from the forward at goalmouth.

Meanwhile, the Indian team have arrived at the venue and the whole squad are watching the game on the sidelines.

Penalty corner for Korea. Jang drag flicks but it goes metres wide of the Pakistan bar. Scores remain the same

Pakistan get their first penalty corner in the 3rd quarter. But it is again Korean goalie Kim Jaehyeon who puts in a brilliant save. He is elated.

This has been a brilliant match so far. Everytime Pakistan score, Korea bounce back with a goal soon after. The Koreans, who are a younger side, take the lead once again through Jihun Yang just before the half-time hooter.

Pakistan look more disciplined in the second quarter. They have got their chances and dominated the ball possession so far and Pakistan equalise. It's 3-3.

What a match we are having. Seconds after Korea take the lead, Pakistan score their equaliser.  But the goal has been disqualified. Lead stays with Korea.

Back-to-back penalty corners for Korea. They fail to convert the first and score in the second. It is again Jang Jonghyun. Hat-trick for the Korean.

Pakistan level the score with Junaid Manzoor tapping in the second. Ghazanfar Ali with the pass just outside the D and Junaid just needed to tap in for the equaliser.

Korea start the second quarter brightly with KIM Sunghyun penetrating from the left but his shot at goal was deflected out by a Pakistani defender.

Pakistan started the match with a bang taking the lead inside five minutes but the Koreans made a brilliant comeback into the match. Pakistan have themselves to blame as they conceded two penalty strokes to the opposition to snatch away the lead.

Three consecutive penalty corners for Pakistan but they squander all. Korean goalie Kim Jaehyeon saved two of those and he punches in the air. An eventful first quarter in this match.

Second penalty stroke for Korea.  Amhad Shakil Butt pushes a Korean player on the counter inside the D. Jang give Korea the lead.

First penalty corner for Korea. The ball hits Mubashar Ali and Korea are awarded a penalty stroke. Pakistan review and they lose it.

Pakistan captain Umar Bhutta hammers past the Korean goalie Kim Jaehyeon to take the lead. Taking the ball from the midfield, Umar runs into the D before hammering a powerful angular strike with the Korean goalie nothing to do.

Korea win the toss and they will start with the pushback.

Players take the field. It is the time for National Anthems. Korea go first and then Pakistan.

This will be a big match for Pakistan's newly-appointed head coach Siegfried Aikman as he aims for his second Asian title. He was Japan's national team coach when they won the Asian Games gold in 2018.  Meanwhile, his former team Japan will be playing in the second semifinal against defending champions India later today.

Hello and welcome to the first semifinal of the Asian Champions Trophy 1st semifinal between Pakistan and Korea.

In Dhaka this year, Pakistan finished third in the standings and South Korea were No. 2 in the five-team pool. The winners of PAK vs KOR will face the winners of India vs Japan in the final on Wednesday.

There is not much to choose between Pakistan and Korea. Their round-robin league match ended in a 3-3 draw and both teams have a won each. While Pakistan blanked hosts Bangladesh 6-2, South Korea's only win also came against BAN. The Koreans won 3-2.

At the world and Olympics stage, both Pakistan and Korea have lost their stranglehold. Former world and Olympic champions Pakistan did not even qualify for Tokyo Olympics. Neither did Korea. Asia were represented by India, Japan and China while Australia and New Zealand also made it to Tokyo 2020.