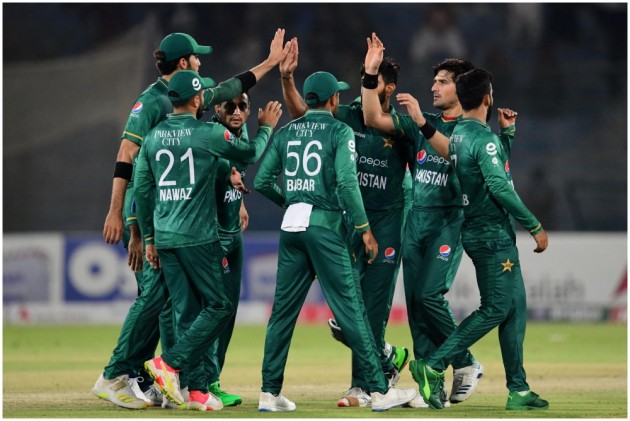 Pakistan just outplayed West Indies completely in Karachi, first with the bat and then with the ball to win the first T20 international by 63 runs. The hosts take 1-0 lead in the three-match series. Sent into bat first, Pakistan rode on fifties from Mohammad Rizwan, Haider Ali and Mohammad Nawaz's late  10-ball 30 cameo to put exactly 200/6 in 20 overs. In reply, West Indies were never in the chase. The visitors were completely undone by Shadab Khan and Mohammad Wasim Jr. While Shadab used the pitch beautifully for his 3/17 in four overs, Wasim was accurate with his yorkers for a match-winning 4/40. In the end, West Indies could manage only 137 in 19 overs with Shai Hope top-scoring with 31. This was also Pakistan's 18th T20 international win in 2021. The second T20 international is on Tuesday. Catch highlights of PAK vs WI first T20 here.

It's all over here in Karachi. Mohammad Wasim Jr clean bowled Oshane Thomas to seal the win for Pakistan. West Indies all out for 137. Pakistan win by 63 runs.

Pakistan are one wicket away from a win. Shaheen Shah Afridi picks up his first in the match while Mohammad Wasim Jr his third as West Indies are 135/9 (18.2)

It's Shadab Khan again. The spinner takes his third wicket in the form of Rovman Powell,  caught by Mohammad Nawaz for 23. West Indies 88/7, still need 113 from 37 balls.

West Indies are in serious trouble right now. Left-arm spinner Shadab Khan takes two wickets in an over as half of the West Indies are back in the dugout. He dismisses Shai Hope and Shamarh Brooks. West Indies 60/5 (10)

Mohammad Wasim Jr is turning this game on Pakistan's head. He has two wickets in two overs. Devon Thomas, LBW for 2. West Indies 40/3 (5.2)

Nicolas Pooran's brief show at the crease comes to an end.  Just when Pooran was opening his arms, the West Indies captain is clean bowled by Mohammad Wasim Jr for 18. West Indies 33/2 (4). Devon Thomas and Shai Hope are currently at the crease.

Not the start West Indies started in their chase for 201. After his brave show with the bat, Mohammad Nawaz dismisses Brandon King, caught by Babar Azam for just 1. West Indies 15/1 (2)

A late blitzkrieg from Mohammad Nawaz helps Pakistan finish their 20 overs at exactly 200/6. Nawaz, who took 21 runs from the 19th over, finishes at 10-ball 30 that included three fours and two sixes.

Mohammad Rizwan is finally out with Romario Shepherd taking the big wicket. Rizwan goes for a well-made 52-ball 78. Pakistan 144/3 (16)

There is no stopping Mohammad Rizwan. He is taking the West Indies bowlers to cleaners. Haider Ali joins the party too with a six and four as Pakistan cross 100-run mark. Pakistan 103/2 (12)

Mohammad Rizwan brings up his fifty in 34 balls. The opener is having a dream run in this format in 2021 and he is just continuing with the momentum. At the halfway stage Pakistan are 75/2. This is Rizwan's 12th career fifty and 11th in 2021.

India Test vice-captain Rohit Sharma has been ruled out of their tour to South Africa. The India opener sustained a left hamstring injury, BCCI said. Priyank Panchal replaces Rohit in the India squad.

Fakhar Zaman's brief stay at the crease comes to an end. He mistimes a slower delivery, tries to loft it through the line, ends up giving a catch to Shamarh Brooks at long-on. Zaman goes for 10. Romario Shepherd gets the wicket. Pakistan 36/2 (5)

Mohammad Rizwan (21*) is carrying his white-ball form against West Indies. The right-hander has been in subline touch so far. Fakhar Zaman (9*) is at the other end. Pakistan 30/1 (4).

Dream start by West Indies. Akeal Hosein dismisses Babar Azam, caught by Shai Hope, for a duck in the fifth ball of the match. Pakistan 3/1 (1)

West Indies have won the toss and opt to bowl first.

The weather forecast is clear and pleasant. The pitch at the National Stadium is expected to be full of runs.

Hello and welcome to the live coverage of Pakistan vs West Indies first T20 international at the National Stadium in Karachi.

West Indies suffered a major blow upon arrival after Sheldon Cottrell, Roston Chase and Kyle Mayers and a non-coaching staff tested positive for Covid-19 on December 9. The trio has been put under self-isolation and will be unavailable for the three-match T20 International series. With big names Jason Holder, Evin Lewis, Shimron Hetmyer, Andre Russell, Kieron Pollard and Lendl Simmons unavailable, the Caribbeans are a relatively new side led by Nicolas Pooran.

West Indies won’t mind that irrespective of what the outcome would be at the end of the series considering the fact they want to move on after a disastrous T20 World Cup 2021. The series against a strong Pakistan side will also give West Indies a fresh start as a part of the preparations for the next edition of the T20 World Cup in Australia.

Meanwhile, Pakistan have been in great form following their T20 World Cup 2021 semifinal exit with a 3-0 thrashing of Bangladesh in T20 internationals. Led by Babar Azam, Pakistan have looked ferocious in the past few months with their openers setting a strong platform at the top majority of the time. The one area Pakistan need to look at is their middle-order that hasn’t been consistent. In bowling, Pakistan have rested Hasan Ali.