Pakistan produced a stunning chase to eclipse West Indies' 207/3 in 18.5 overs in the third and final T20 International match at Karachi on Thursday. Catch highlights of PAK vs WI cricket match here. 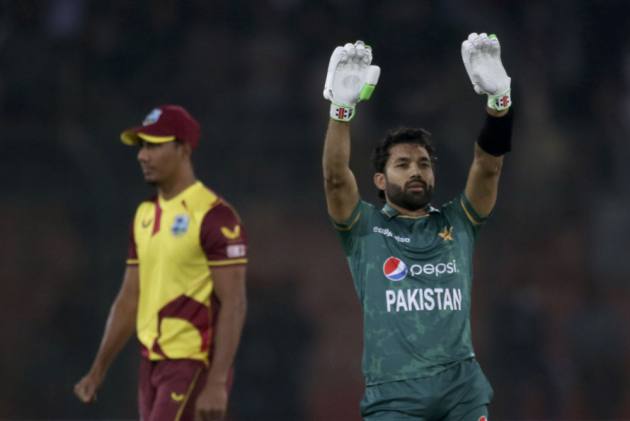 After the heartbreak of missing out on hosting New Zealand and England, Pakistan ended 2021 with a 3-0 series sweep of West Indies at home. Pakistan on Thursday chased down Windies' 207/3 with seven balls to spare in Karachi to record their highest successful run chase in T20 Internationals. The win at National Stadium also helped Pakistan clock an unprecedented 20 T20I wins in a calendar year. Before that, a World Cup semi-final appearance with wins against India and the Kiwis, and a 3-0 series sweep against Bangladesh... these are exciting times for Pakistan cricket!

A depleted West Indies, courtesy of an outbreak of coronavirus in the visiting camp, certainly helped Pakistan's cause but skipper Babar Azam and Mohammad Rizwan were imperious. They stitched a 158-run stand in 15.1 overs to lay a solid foundation, then Asif Ali hit 21 off seven to seal the win. Rizwan in the process became the first-ever batter to score T20 2000 runs in a calendar year. In fact, Babar's 1779 this year is also more than the previous high of 1665 by Chris Gayle in 2015. Rizwan and Azam also became the first-ever opening pair to stitch six century stands in T20Is. Rizwan won both the player of the match and series awards.

Both the teams made a couple of changes. With another bout of COVID-19 hitting the camp, Windies handed debut to Gudakesh Motie, who came in for Akeal Hosein in a like for like replacement, while Darren Bravo came in for Shai Hope. Pakistan rested Shaheen Afridi and Haris Rauf, and picked Mohammad Hasnain and Shahnawaz Dahani.

Nicholas Pooran won the toss and opted to bat first. The skipper top-scored with 64 as the visitors produced their best batting show of the short-lived tour. Brandon King and Shamarh Brooks scored 43 and 49 runs respectively. But a total of 207/3 still proved too little for a bouyant Pakistani side.

But the three-match ODI series between the two sides has been postponed to June 2022. Catch highlights and cricket scores of the third and final PAK vs WI, T20I match here:

Romario Shepherd with his final over. Fakhar Zaman (12 off 8) caught off the first ball by Shamarh Brooks at long on. New man Iftikhar Ahmed takes a single. Asif Ali hits the third for a six, then a four off the fifth. A dropped catch at long on to end the match. Pakistan win by seven wickets. Some chase. A 3-0 series sweep. 6-0 for Pakistan in two back-to-back series. PAK - 208/3 (18.5)

Odean Smith breaks the opening stand. Babar Azam (79 off 53) holes out off the first ball, caught by Romario Shepherd at long off. New man Fakhar Zaman hits the second ball for four, to deep mid-wicket. 11 from the over. Pakistan need 39 runs in 24 balls. PAK - 169/1 (16)

Hayden Walsh with his second over. 18 from the over as Mohammad Rizwan hits the second and last balls for fours. Babar Azam hits the fifth for a six. Pakistan need 50 runs in 30 balls. PAK - 158/0 (15)

Dominic Drakes returns for his third over. Babar Azam plays the fourth ball to mid-wicket and calls for a second only to send Mohammad Rizwan back. Rizwan takes a swift turn and is having issues. Looks like hamstring. Physio in the middle.

Oshane Thomas with his second over. Two singles, and Babar Azam hits his first six, over long off. And follows it up with a four, to long on. And another one, this time square of the wicket. 17 from the over. Pakistan need 75 runs in 42 balls. PAK - 133/0 (13)

Oshane Thomas gets his first over. Mohammad Rizwan hits the first ball for a four to bring up a century stand with his skipper Babar Azam in 61 balls. They are also the first pair to stitch five 100-runs stands in T20Is, one more than Rohit Sharma and Shikhar Dhawan. Rizwan also completes 2000 T20 runs in 2021, the first to do in a calendar year. Eight from the over. Pakistan need 102 runs in 54 balls. PAK - 106/0 (11)

Odean Smith with his second over. Mohammad Rizwan pulls the second ball for a six, then Babar Azam hits the fourth for a four. A single to square leg fifty for Mohammad Rizwan, in 26 balls. Pakistan need 110 runs in 60 balls. PAK - 98/0 (10)

Odean Smith on with his medium pace. Four singles, then a loose ball dispatched for four, to fine leg by Babar Azam. Eight from the over. Pakistan need 137 runs in 72 balls. PAK - 71/0 (8)

Gudakesh Motie with his third over. Babar Azam hits back-to-back fours off the fourth and fifth. 13 from the over. PAK - 54/0 (5)

Gudakesh Motie continues. Mohammad Rizwan hits the fourth and fifth balls for a four and six. 11 from the over. PAK - 30/0 (3)

Romario Shepherd with the second over. Babar Azam hits the third ball for a four, then Mohammad Rizwan hits the fifth and sixth for a four and a six. 17 from the over. PAK - 19/0 (2)

Two singles from the over. Very good start from Gudakesh Motie with his left-arm spin.

Meanwhile, the three-match ODI series between the two teams have been postponed to 2022. The visitors have been hit hard by coronavirus.

Mohammad Wasim Jr returns for his third over. Nicholas Porran hits the first ball for a four, then a no-ball for height. And Pooran creams the free-hit, a six over long off. Windies skipper needs a new bat. Shadab Khan saves a certain four at long off. And Pooran (64 off 37) holes out off the next. Caught by Mohammad Nawaz. Rovman Powell is the new man. WI - 192/3 (17.4)

Shahnawaz Dahani with his third over. Dahani is convinced he traps Nicholas Pooran in front. But review reveals it's pitching outside. Darren Bravo gets a thick edge and four to fine leg. Pooran takes a couple off the fifth to bring up his fifty, in 31 balls. Nine from the over. WI - 179/2 (17)

Mohammad Hasnain with his final over. Nicholas Pooran hits the first ball for a four, then two singles. The Windies skipper returns to strike and pulls the fourth for a six. A single, and a four for Darren Bravo, to deep mid-wicket. 17 from the over. Hasnain's figures tonight: 0/49. WI - 170/2 (16)

Mohammad Wasim Jr on with his second over. Another first-ball six as Nicholas Pooran launches it over deep mid-wicket. 10 from the over. 55 runs in the last five overs. WI - 124/2 (12)

Shahnawaz Dahani with his second over. A mistimed hook off the fourth and Shamarh Brooks holes out at deep midwicket. He goes for 49 off 31. WI - 99/2 (9.4)

Mohammad Nawaz returns for his third over. Shamarh Brooks hits the first ball for a four, then a dropped catch. Hasnain and Iftikhar let the ball drop between them at long on and blame each other. Nine from the over. WI - 78/1 (8)

Nicholas Pooran joins Shamarh Brooks. Shadab Khan on with his first over. Two dots then Brooks takes a single. A dot to Poorna, then a single as the Windies captain opens his account. Three from the over. WI - 69/1 (7)

Mohammad Wasim Jr on. Shamarh Brooks hits flicks the first ball for a six, then a couple. A single, then a dot. Brandon King hits a massive six off the fifth. But Wasim gets his man. King loses his off stump. He goes for 43 off 21. WI - 66/1 (6)

Mohammad Hasnain on with his second over. Shamarh Brooks takes a couple off the first, then a single to rotate the strike. Brandon King hits back the third, over the bowler's head for a four. And another one, this time to deep backward point. Two singles and 13 from the over. WI - 47/0 (4)

Mohammad Nawaz continues. Shamarh Brooks gets his first boundary, a straight four off the second. One leg bye, then Brandon King launches the fourth ball for a six, over cow corner. And two more fours. 19 from the over. WI - 34/0 (3)

Mohammad Hasnain shares the new ball. Brandon King hits the last ball for a four. A pull shot with conviction. Six from the over. WI - 15/0 (20)

Brandon King hits the third and fourth balls for fours. Good start for West Indies. Nine from the over.

Players in the middle. And symbolic gestures as the teams take a stand against racism. Mohammad Nawaz with the new ball. Brandon King to take the strike. Shamarh Brooks is his opening partner.

Two changes for Pakistan. Shaheen Afridi and Haris Raut rested. Shahnawaz Dahani and Muhammad Hasnain in. And COVID-19 forced changes for the Windies. Darren Bravo and Gudakesh Motie in for Shai Hope and Akeal Hosein. Motie is making his debut.

West Indies win the toss and opt to bat first against Pakistan.

If back-to-back defeats were not bad enough, West Indies are reeling under the fear of coronavirus in Karachi. It will be very difficult for an under-strength West Indian side to stop a red-hot Pakistan from sweeping the T20 International series 3-0 on Thursday.

In terms of performance, Pakistan look very settled and could try fresh legs against West Indies with very few players capable of handling a bowling attack that Pakistan possess.

Minus their T20 stalwarts, a new-look West Indies did well in the second T20 which they lost by nine runs. Needing 23 off the last over, Shepherd hit Haris Rauf for 13 runs but the West Indies were bowled out on the last ball when the paceman clean bowled No. 11 Oshane Thomas. The West Indies were all out for 163 in reply to Pakistan’s 172 for 8.

Pakistan have been able to find that extra edge in all 10 games they have won in their last 11 T20 internationals starting at the T20 World Cup in UAE.

On Tuesday, fast bowler Shaheen Shah Afridi (3 for 26) had West Indies on the mat at 131 for 8 when he claimed three wickets in the 17th over but it was Shadab Khan's unbeaten 28 off 12 balls that made the difference after Pakistan were 141 for 7 at the end of 18 overs.