With Scotland winning they have one foot in the ICC Men's T20 World Cup Super 12. A win for Oman against Bangladesh on Tuesday will decide the group itself. 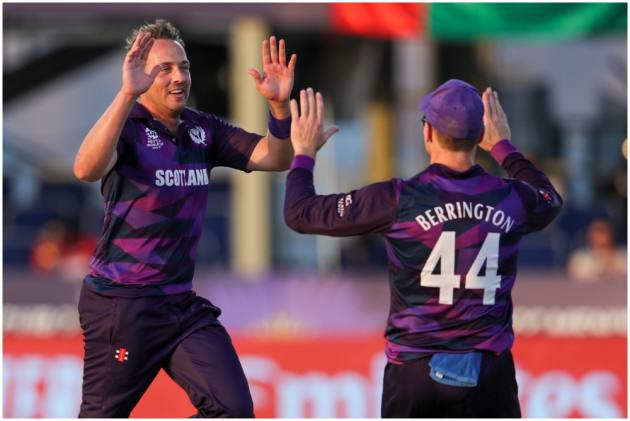 A win on Monday will take Scotland towards a dream Super 12 berth while a loss for Papua New Guinea will mean an early exit from the T20 World Cup 2021. The Scots are on a high having upset Bangladesh in their opening first-round Group B match. The PNG vs SCO match in Muscat will depend on how the batsmen on either side fare. PNG made a poor start against hosts Oman and Scotland also suffered a batting collapse against Bangladesh only to recover a post a decent total. Good fielding will also count in this contest. There will be a few players to watch out for. PNG will look up to Norman Vanua, whose batting will be key in a must-win game against Scotland. The Scots will bank on Safyaan Sharif, who bowled the final over against Bangladesh. But his wicket-taking skills are yet to be seen. Follow live cricket scores of PNG vs SCO here.

With this win Scotland inch closer to a place in the Super 12 stage. They now have two wins from two games having earlier defeated Bangladesh in their opener. Chasing 166, PNG were down to 35/5 at one stage but the way they clawed back is really commendable, thanks to a Norman Vanua 47 towards the end.  Scotland's Josh Davey took 4/18 in 3.3 overs.

Josh Davey picks up dangerous Norman Vanua for 47. All over for PNG as they lose their eighth wicket. PNG 128/8 after 18 overs.

Probably the final nail in the coffin for PNG. Sese  Bau departs for 24, off the bowling of Chris Greaves. PNG 70/6 after 12 overs

Sese Bau leads PNG charge with an unbeaten 23 as drinks are brought in the field. Surely Scotland are bossing the game at the moment. PNG 61/5 after 10 overs.

PNG are in dire straits. They have lost half of their batting for just 35 runs in exact six overs. Two wickets for Scotland in the sixth over. Sese Bau and Norman Vanua are in the middle for PNG

After a good outing with the bat, Scotland bowlers have done exactly what the doctor ordered. Josh Davey and Bradley Wheal sent back PNG top three including dangerous Assad Vala (18). PNG 30/3 after 4.5 overs.

Six wickets including three on the final three balls of the innings are something to cheer about for minnows PNG. Richie  Berrington top-scored for Scotland with 70. Scotland finish at 165/9.  For PNG, Chad Soper (3/24) and Kabu Morea (3/31) starred with the ball.

Fifty for Richie Berrington. He dances down the ground and slams Kabua Morea for a boundary to reach the milestone. Scotland 135/3 after 16 overs.

Finally, it's a success for Simon as he dismisses Matthew Cross for 45 breaking the 92-run third-wicket stand.  Calum MacLeod joins Richie Berrington in the middle. Scotland 120/3 after 15 overs.

Both Matthew Cross (42*) and Richie Berrington (42*) have taken the game on their head now. The duo picked up 42 runs in the last three against a hapless PNG attack to bring up 100 in the 13th over for Scotland. Scots 109/2 after 13 overs

After initial hiccups, Scotland seem to have found their ground with Matthew Cross (18*)  and Richie Berrington (24*) steadying the ship. Scotland 67/2 after 10 overs.

PNG are off to a dream start here. They have sent back Scotland openers George Munsey (15) and captain Kyle Coetzer (6) back in the hut cheaply. Scotland 28/2 after 4 overs. Chad Soper and Kabua Morea took the wickets for PNG.

The conditions are hot and humid in Al Amerat in Oman. There is a tinge of greenary in the pitch and looks very beautiful strip. Lengths and the pace will be the key here.

Scotland have won the toss and they will bat first.