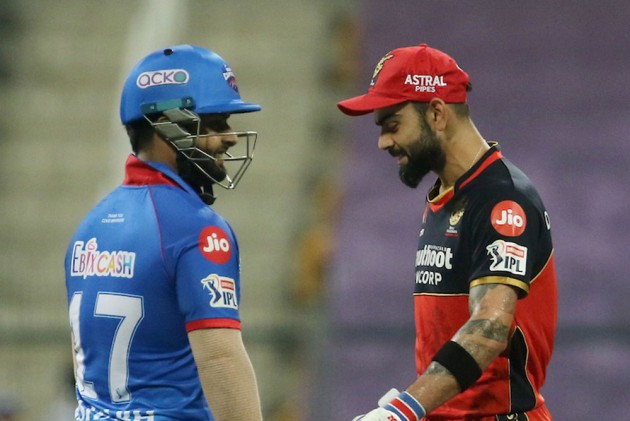 Royal Challengers Bangalore beat Delhi Capitals by seven wickets in their Indian Premier League (IPL) 2021 match in Dubai, UAE on Friday after a last-ball six by Srikar Bharat. The youngster remained unbeaten on 78 off 52 balls while Glenn Maxwell made 51 off 33 as RCB chased down DC's target of 165 in a thrilling last-ball finish. Delhi Capitals scored 164 for five. Sent into bat, DC were off to a flying start with openers Shikar Dhawan (43) and Prithvi Shaw (48) putting on 88 runs in just 10.1 overs. Shimron Hetmyer got out off the last ball of the innings after scoring 29 off 22 balls. Catch highlights and cricket scores of RCB vs DC in Dubai.

Avesh Khan on with the last over. Bangalore need 15. Glenn Maxwell hits the first ball for a four, past mid off. A double then a single. A dot, then a couple. And 6 off 1. Srikar Bharat on strike. A wide, making it five off 1. And six, over long on. What a finish. RCB win by seven wickets.

Glenn Maxwell with the first over. Shikhar Dhawan and Prithvi Shaw opened for Delhi.

"It's a little dry, and there's hardness. It's an even contest between bat and ball here," Matthew Hayden tells Anjum Chopra during their pitch report for the official broadcasters.

In the first leg meeting, RCB pulled off a thrilling one-run won against DC despite Rishabh Pant hitting Mohammed Siraj for fours off the last two balls in Narendra Modi Stadium in April. AB de Villiers' unbeaten 75 of 42 powered RCB to 171/5. Pant and Shimron Hetmyer were unbeaten on 58 off 48 and 53 off 25 respectively.