Catch Day 3 highlights and cricket scores of first Test between South Africa vs India at Centurion. Thanks to Mohammed Shami's fifer, India have taken a lead of 146 runs. 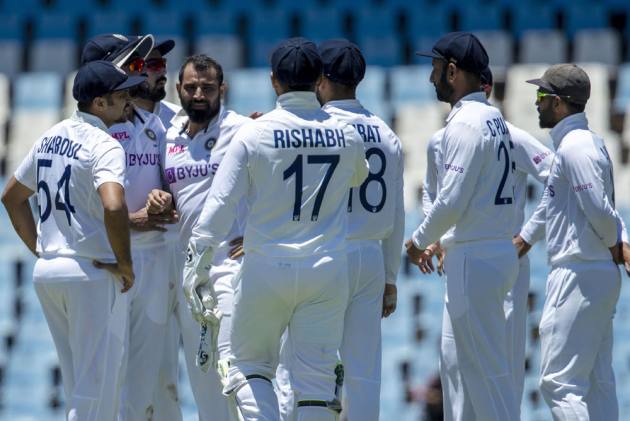 After losing an entire day's play on Monday, the first Test match between South Africa and India became an instant hit with pacers making their mark in a sport that has become a batter's game. 18 wickets for 270 runs on Day 3 at SuperSport Park, Centurion -- that's how it unravelled. First, Lungi Ngidi and Kagiso Rabada toyed with the Indian batters, who could add only 55 runs to their overnight score of 272/3. Then, Indian pacers returned the favour in kind with Mohammed Shami claiming a fifer even as Jasprit Bumrah sprained his ankle. At the close of play on Tuesday, India were 16/1 in six overs for a lead of 146 runs, with debutant Marco Jansen claiming the wicket of Mayank Agarwal in the final over. Earlier, South Africa were dismissed for 197 in reply to India's first innings total of 327. In another Boxing Day Test, Australia destroyed England to claim the Ashes 3-0. And the star was another pacer, debutant Scott Boland. Catch Day 3 highlights and cricket scores of the first SA vs IND Test match:

First bowling change and Marco Jansen strikes. A beauty to send Mayank Agarwal back. Caught behind. The Indian opener, who survived a similar nick in the first innings, goes for four off 14. India lead by 142 runs. Shardul Thakur is the nightwatchman. IND - 12/1 (5.2) & 327. SA - 197

Kagiso Rabada with the new ball. KL Rahul takes the strike, and his opening partner is Mayank Agarwal.

Jasprit Bumrah with the final wicket of South Africa's first innings. A wild swing from Keshav Maharaj and is caught at third man by Ajinkya Rahane. He goes for 14 off 19, and South Africa are all out for 197 in 62.3 overs. India take a lead of 130 runs.

Marco Jansen is given LBW out. South Africa take the review but the decision is upheld. Jansen is gone for 19 off 42, and the 37-run stand is broken. Second for Shardul Thakur. South Africa trail by 146 runs. Keshav Maharaj is the new man. SA - 181/8 (57)

Mohammed Shami gets his third. A half-volley and Wiaan Mulder can't resist the temptation. Faint edge and Rishabh Pant takes a low catch behind the wickets. A 29-run stand broken. Mulder goes for 12 off 36. Debutant Marco Jansen is the new man. South Africa trail by 194 runs. SA - 133/6 (43)

7:03 PM IST: Players are back for the post-tea session. This will be an extended session, by half an hour.

Shardul Thakur with his fifth over and he knocks out Quinton de Kock's off stump. Chopping a wide ball and gets an inside edge. 72-run stand broken. De Kock goes for 34 off 63. Wiaan Mulder is the new man, and he hits the first ball for a four. South Africa trail by 219 runs. SA - 108/5 (35)

Meanwhile, Jasprit Bumrah is back.

Ravichandran Ashwin continues. Quinton de Kock takes a single off the first ball, and a fifty-run stand in 92 balls with Temba Bavuma. De Kock then hits the next ball for a six, the first of the innings. Nine from Ashwin's fourth over. South Africa trail by 237 runs. SA - 90/4 (28).

"Jasprit Bumrah has suffered a right ankle sprain while bowling in the first innings. The medical team is monitoring him at the moment. Shreyas Iyer is on the field as his substitute," a BCCI said in a statement.

The pacer sprained while bowling the penultimate delivery of the sixth over.

Shardul Thakur with his second over. Quinton de Kock hits the first two balls for fours. Fifty up for South Africa. They still trail India by 270 runs. SA - 57/4 (20)

5:00 PM IST: U-19 Asia Cup group match between Sri Lanka and Bangladesh cancelled due to COVID-19. Bangladesh will now play India in the semis.

Rassie van der Dussen (3 off 18) survives a nick off the fourth ball, dropping just in front of Virat Kohli at the second slip. But it doesn't really bother India as Mohammed Siraj gets his man the next ball. Edges and Ajinkya Rahane takes a fine take. South Africa trail by 295 runs. Quinton de Kock is the new man. SA - 32/4 (12.5)

Mohammed Shami takes only three deliveries after lunch to rock the Proteas. Keegan Petersen drags one and is bowled. He goes for 15 off 22. South Africa still trail by 302 runs. SA - 25/2 (7.3)

4:10 PM IST: Players are back for the post-lunch session.

Jasprit Bumrah with the last over before lunch. Keegan Petersen hits the fourth ball for a four. A brilliant cover drive. Aiden Markram is the other unbeaten batter. Five from the over, Mohammed Shami got his first over before that. South Africa still trail by 306 runs. SA - 21/1 (7)

Jasprit Bumrah bolwing in tandem with Mohammed Siraj. A single from his third over. SA - 15/1 (5)

And what! Jasprit Bumrah strikes. Dean Elgar gets an unplayable delivery. Lenght so good and the feet not moving. Stuck in the pitch and easy for Rishabh Pant behind the wickets. Keegan Petersen is the new man. SA - 2/1 (0.5)

A little fightback from India. Jasprit Bumrah and Mohammed Siraj in an unbeaten 19-run stand for the last-wicket. South Africa operating with wicketless Wiaan Mulder and Marco Jansen. Surprise! IND - 327/9 (105)

Lungi Ngidi continues to rock. Mohammed Shami (8 off 9) goes. Caught behind. Nothing much to write about. Following the script. Six for Ngidi. Scott Boland in Centurion! Mohammed Siraj is the last man. And some breather. Drinks. In the last ten overs: 36 runs and six wickets. IND - 308/9 (100.5)

Kagiso Rabada strikes again. Shardul Thakur looks to play on the up but his front foot is nowhere near the pitch. Faint edge and is caught behind. He goes for four off eight. Jasprit Burmah is the next match. IND - 304/8 (100)

Game on. A leading-edge and Ravichandran Ashwin is gone for four off five. Easy catch for Keshav Maharaj at cover. Three wickets in no time. Shardul Thakur is the new man. IND - 296/6 (97.4)

Kagiso Rabada strikes. The pacer bangs in short and takes the glove with the 8th ball of the ball. KL Rahul is caught behind. He goes for 123 off 260. A 79-run stand in 157 is broken. Rishabh Pant will join Ajinkya Rahane in the middle. Expect some fireworks. IND - 278/4 (94)

1:42 PM IST:  The International Cricket Council (ICC) has announced the 2021 edition of the ICC Awards, "celebrating and rewarding the top performances across men’s and women’s international cricket throughout the year."

And the categories are:

Here are the updated playing times. The plan is to bowl 98 overs today.

After a washout on Day 2, the weather is bright and a full day's play is expected. There will be some kind of moisture because of the rain yesterday. The forecast is also clear today.

After Monday's play was completely washed out, both India and South Africa will be redrawing their game plans. With more rain expected later in the week, it will be interesting to see how long India bat on Tuesday. Will India try to score at least 300 and unleash their bowlers on a South African batting lineup?
The Centurion wicket has been good for batting and KL Rahul has taken maximum advantage of it. After India won the toss, Rahul and Mayank Agarwal had put together India's first century opening stand in South Africa since 2010. Agarwal and Virat Kohli, badly in need of a big score, could not convert their good starts. Rahul did.

The much-touted South African pace attack was well handled by the Indian top order. Lungi Ngidi (3/45) was the only wicket-taker for the hosts and he was lucky too. Kohli's wicket was a gift as the Indian captain chased a wide ball and nicked it.

KL Rahul will start at his overnight score of 122 and Ajinkya Rahane, another Indian veteran who is in dire need to score a big one and secure his Test future, is batting on 40. This Rahul-Rahane duo has put on 73 runs for the fourth wicket and is looking good for more.

The series is the first assignment away from home for new India coach Rahul Dravid and India is searching for their first win in South Africa on their eighth Test tour to South Africa.