Catch Day 2 highlights and cricket scores of the second Test between South Africa and India, being played at the Wanderers, Johannesburg. India took a lead of 58 runs. 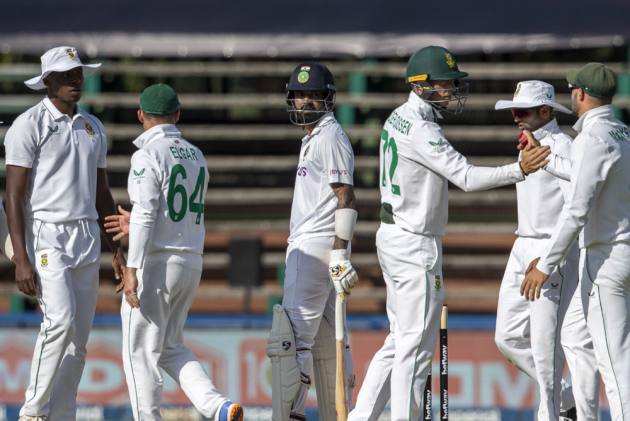 On a topsy-turvy day of Test cricket in Johannesburg, Shardul Thakur entered record books by registering the best bowling figures by an Indian against South Africa with a seven-wicket haul. But the all-rounder's 7 for 61, his maiden five-wicket haul, failed to deny the Proteas from taking a crucial 27-run lead on Day 2 of the second Test at the Wanderers. Then, India lost both the openers, KL Rahul and Mayank Agarwal, to end the day at 85/2 (20) for a lead of 58 runs. Cheteshwar Pujara (35) and Ajinkya (11) were in an unbeaten 41-run stand.

Resuming at the overnight score of 35/1, South Africa added 53 runs before losing skipper Dean Elgar for 28 but Keegan Petersen (62 off 118) struck a fine half-century before lunch. Temba Bavuma hit 51 off 60 balls. The day also witnessed a controversial dismissal of Rassie van der Dussen. But the day belonged to Thakur. The 30-year-old pacer ran through the Proteas batting line-up. Mohammed Shami got a couple (2/52) while Jasprit Bumrah took one. India were all out for 202 in their first innings. Catch Day 2 highlights of the second SA vs IND here:

Despite losing two early wickets, India are scoring at a brisk rate, over four an over. Cheteshwar Pujara hits Marco Jansen for two fours. In the previous over, Ajinkya Rahane hit Kagiso Rabada for a four. India lead by 47 runs. IND - 74/2 (18)

Marco Jansen with his fifth over. Cheteshwar Pujara hits the first ball for a four, through covers. India lead by 32 runs. IND - 59/2 (16)

Massive wicket. Mayank Agarwal goes for 23 off 37, trapped in front by Duanne Olivier. He shoulders but the ball comes back. No review. India lead by 17 runs. Ajinkya Rahane is the new man. IND - 44/2 (11.4)

A lengthy review to check if Aiden Markram has taken a clean catch at second slip. KL Rahul fails to control his defensive shot and it flies to the cordon. Third umpire happy with the catch. Rahul not happy. He goes for 8 off 21. And Marco Jansen gets his man. Cheteshwar Pujara is the new man. Crisis man or the man in crisis! India trail by three runs. IND - 24/1 (6.5)

KL Rahul hits Duanne Olivier for a four off the last ball. In the previous over, Mayank Agarwal hit Kagiso Rabada for back-to-back fours. India trail by 12 runs. IND - 15/0 (4)

Players are out for the Indian second innings. Kagiso Rabada with the first over. KL Rahul takes the strike. A single off the second ball. Mayank Agarwal is Rahul's opening partner. India trail by 26 runs. IND - 1/0 (1)

Shardul Thakur gets his sixth wicket. Ravichandran Ashwin takes a brilliant catch at deep. Marco Jansen goes for a swing but ends up getting a top-edge. Jansen goes for 21 off 34. Lungi Ngidi is the new man. South Africa lead by 26 runs. SA - 228/9 (79.1)

Shardul Thakur with his 15th over. Marco Jansen lofts the last ball to deep. A couple for the effort. South Africa take lead. SA - 203/7 (73)

Shardul Thakur resumes proceedings with his 15th over. Marco Jansen hits the third ball for a four, through cover. A dot, a body blow. Hit on the chest. A length delivery kicks off and breaches his defence. Medical attention... Jansen continues. South Africa trail by 7 runs. SA - 195/7 (71)

Mohammed Shami gets his second. Kagiso Rabada goes for a six-ball duck, caught by Mohammed Siraj at mid-on. Keshav Maharaj is the new man. South Africa trail by 23 runs. SA - 179/7 (67.3)

Umpires having one final look. And it's clean. Lessons learnt!

Temba Bavuma gets a streaky four, beating the third man with an outside edge and fifty for him, in 59 balls with six fours and a six. Then, the very next ball, he departs. Fifty and gone, again. A terrific catch from Rishabh Pant. A maiden Test fifer for Shardul Thakur. Thakur is the sixth Indian bowler to complete a fifer at Wanderers, after Anil Kumble, Javagal Srinath, S Sreesanth, Jasprit Bumrah and Mohammed Shami. South Africa trail by 25 runs. Kagiso Rabada is the new man. SA - 177/6 (66.3)

Ravichandran Ashwin with his 8th over. Kyle Verreynne takes a single off the second ball to bring up a fifty-run stand with Temba Bavuma in 100 balls. South Africa trail by 49 runs. SA - 153/4 (62)

India take the review, for LBW against Kyle Verreynne. Mohammed Shami brings in the delivery, and it clatters into the front foot. Healthy inside edge. South Africa trail by 72 runs. SA - 130/4 (51.3)

Kyle Verreynne hits Shardul Thakur for a couple of fours in the over, including a beautifully driven cover drive off the fourth ball. South Africa trail by 73 runs. SA - 129/4 (51)

Mohammed Shami with his 17th over. Temba Bavuma guides the third ball past gully for his first boundary. A bouncer to rattle Kyle Verreynne and a leg slip, then Shami follows it up with a yorker. Verreynne survives. South Africa trail by 83 runs. SA - 119/4 (50)

Shardul Thakur gets his third. Banging hard and an inside edge. Rishabh Pant takes a very fine, diving catch. Rassie van der Dussen goes for 1 off 17. Replays show it's not a clean take from Pant though. Sadly for Rassie, he walks. And that's lunch. Thakur's figures so far: 3/8 in 4.5 overs with two maiden overs. South Africa trail by 100 runs. 67 runs and three wickets in the session. SA - 102/4 (44.4)

Outside the off and moving away, but Keegan Petersen plays it. And he is out. Mayank Agarwal completes the rite at the second slip. Petersen goes for 62 off 118. South Africa trail by 101 runs. Temba Bavuma is the new man. SA - 101/3 (42.6)

Shardul Thakur on and Keegan Petersen guides the first ball to fine leg to bring up his maiden Test fifty, in 103 balls. His previous best was 19. He follows it up with a flick. Back-to-back fours. South Africa trail by 106 runs. SA - 96/2 (39.2)

Shardul Thakur into the attack. Dean Elgar guides the fourth ball through the cordon for his third boundary. South Africa trail by 123 runs. SA - 79/1 (37)

Mohammed Siraj continues. Keegan Petersen takes a single off the first ball and 50-run stand in 160 balls with Dean Elgar, who's having a strike rate of less than 16 pc. South Africa trail by 138 runs. And drinks. SA - 64/1 (31)

Ravi Ashwin gets his first over. Two dots and Ashwin drops it a little short, and Dean Elgar works it nicely to square leg for his second boundary. South Africa trail by 139 runs. SA - 63/1 (30)

Mohammed Siraj is fit to bowl. He limped off hamstrung yesterday. Keegan Petersen flicks the second ball for a four, first boundary of the day. A dot, then Petersen leans on and plays a lovely cover drive. Suddenly boundaries. South Africa trail by 143 runs. SA - 59/1 (29)

Soft signal is out. Caught behind. Rishabh Pant takes a low catch and the review is to check if it carried to the wicketkeeper. Outside edge of the bat and ball kisses the ground. Dean Elgar survives. Unlucky Jasprit Bumrah. SA - 49/1 (25.4)

Mohammed Shami with his ninth over. Odd balls keeping low. Dean Elgar survives one but not his bat. It has become quacky. Proteas skipper gets a new one. A maiden. South Africa trail by 158 runs. SA - 44/1 (23)

Jasprit Bumrah with his ninth over. Keegan Petersen plays the second ball in front of the square and takes three for the first runs of the day. In the previous, Mohammed Shami bowled a maiden to Dean Elgar. SA - 38/1 (20)

Ravichandran Ashwin: It wasn't easy to bat on this pitch yesterday as the ball was doing up and down at times. Test cricket is all about problem-solving and we need to plan out bowling against them.  We need to keep pressure on them.

India have a task at hand and need to break the Dean Elgar-Keegan Petersen stand as soon as possible. The duo has been resolute during their at the crease stay on Day 1 adding 21 runs so far in 85 deliveries.

India's four-man pace attack will be hungry for breakthroughs as the tourists hope to capitalise on the crucial first hour at the Wanderers on Tuesday. Trailing by 167 runs, South Africa start at 35 for one wicket, having lost Aiden Markram for 7.

Mohammed Shami, India's best bowler on this tour so far, struck early by removing Markram, one of the very few in this South African batting line-up capable of staying at the wicket.

Protea skipper Dean Elgan and No. 3 Keegan Petersen did well to survive 18 overs in the final session on Monday on a wicket that has not been a batting paradise.

The onus will be on the top order to keep South Africa's hopes of at least drawing this match to keep the series alive till the third and final Test starting at Cape Town on January 11.

But for Rahul's 50 and a defiant 46 by No. 7 Ravichandran Ashwin, India's batting was flatted by the combined effort of the South African pacers, especially Duane Olivier, who was one of the two changes the home team made for this Test.

South Africa’s quick bowlers had the better of the day at the Wanderers on Monday with Marco Jansen taking 4 for 31 and Duanne Olivier and Kagiso Rabada grabbing three wickets each. India need to do something similar on Day 2.